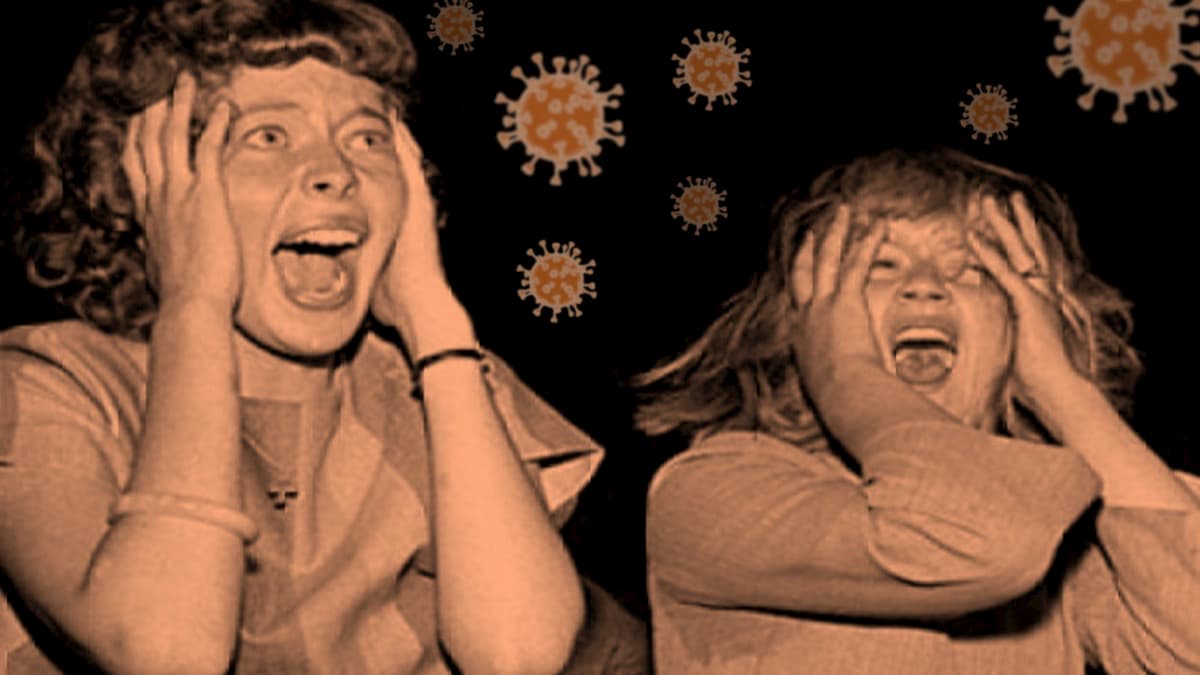 In this post we look at some of the uncertainties around the danger of Covid-19 that are only just beginning to be aired in the mainstream media. We include videos from a range of different experts who are questioning the wisdom of the draconian responses that governments around the world have adopted, including the views of top scientists in the field.

Have we gone too far, too fast?

On the basis of very dodgy data* (see the final video below), and some wild mathematical modelling, the UK economy has been brought to a standstill, millions are unable to work or leave their homes, thousands have lost their jobs or their businesses. The cost to the country, industry and individuals is incalculable. (One member of my family stands to lose £100,000 over the next 12 months). Yet, somehow, we have decided that this a price worth paying to “keep us all safe”.

But are such extreme measures really justified? Or have we been swept up in a media-fuelled hysteria which we will regret for decades to come?

Barely mentioned in the press, two countries — Sweden and Japan — appear to have bucked the trend. They decided not to implement a lockdown, and have allowed their economies to continue: pubs, bars and restaurants remain open, as do schools, though international arrivals have been stopped as have the Olympic Games, due to be held in Japan’s capital city this summer, now postponed until 2021.

But, did you know that quietly, on March 19th this year, Covid-19 was downgraded and ‘no longer considered to be a High Consequence Infectious Disease‘ in the UK? The reason? ‘…in particular, more information is available about mortality rates (low overall)’ (GOV.UK)

The scale of the threat is not well known

Winter flu deaths in Britain regularly lead to thousands of ‘excess deaths’ without the health service collapsing, and without economic and social lockdown.

For example, two year’s ago, the winter flu epidemic was worse than usual, and caused an estimated 50,000 ‘excess deaths’ in the UK. Indeed it was the worst flu season in the last 40 years. At the time, however, it barely made the headlines, the NHS coped as it usually does, with a bit of muddling through and complaining, and the media mentioned it in passing. Life, and the economy, however, went on as normal.

In the UK deaths from the coronavirus have, as I write, reached nearly 2000 (check the live Public Health England data here), however, there is a question over how many of these deaths were caused by Covid-19; The small print on the PHE page reads: “The figures shown are deaths in NHS services of patients who have had a positive test result for Covid-19… deaths of people who have had a positive test for Covid-19 could in some cases be due to a different cause.”

As it stands today, the entire world death toll from Covid-19 has only just passed the UK’s 2017/18 winter ‘excess deaths’. So, let’s keep things in proportion.

As things stand we do not know the real risk of this coronavirus, The media blithely reports Italy having a death rate of 12%, but it is a misleading figure. A true risk would be expressed as a percentage chance of dying if you caught the disease. But countries like Italy and the UK only test frontline workers and people who are admitted to hospital, which artificially raises the apparent severity.

Germany is an exception here as they are testing widely ( 160,000 tests per week including the apparently healthy public). Their data leads to a more realistic death rate of below 1%. Even this is likely to be an over-estimate as it still includes a disproportionate amount of hospital admissions, and as already mentioned, includes those who die with coronavirus, not because of it. Some scientists believe that the death rate may be barely higher than normal flu (e.g. see the final video below)

And what of the testing? How much confidence can we have in that? In recent decades amazing advances have been made into finer and more detailed tests of all aspects of biochemistry, and yet this Covid-19 test is said to be only 60-70% accurate. So the question has to be, how is this known? What gold standard is it being judged against, to be able to state this accuracy rate? If there is a gold standard, surely using that test on the public would be the right course of action, if we are serious about understanding this thing. The cost of using that pricey test must be set against the cost of shutting down the economy wholesale. Clearly the test would be cheaper.

And then there is the issue of the specificity of the various Covid-19 tests? What is their reliability? We already know that all medical tests have some degree of inaccuracy, and none are 100% dependable. These questions must be answered before any meaning can be extracted. With dozens of very similar coronaviruses ‘out there’ how certain are we that the tests being used or touted, are going to give us the information we need?We do not want a ‘garbage in, garbage out’ variety of medical advice, do we? Yet with tests being rushed to production this remains a real possibility.

Some researchers believe that many people in the UK have already been infected and recovered without any symptoms, or with only mild symptoms. An Oxford study recently estimated that half of the UK population may already be infected (and thus will soon be immune, presumably), in which case lockdown could be lifted much sooner than expected. Furthermore, if this was established by testing, the fatality rate of Covid-19 would need to be significantly downgraded to truly reflect these findings.

The media, or course, was quick to point out that such modelling is unlikely to be accurate — and they are probably right: extreme predictions rarely prove to be correct. But in that case, why did they accept the modelling that indicated between 250,000 and 500,000 deaths would occur without putting extreme public control measures in place? This was the model that caused the government to ditch its moderate policy of managed herd-immunity, and go headlong into full lockdown whatever the cost to the economy.

Just a fortnight after those same modellers scared us all witless, they tell us that government measures to contain the epidemic will now lead to only 20,000 deaths. Perhaps the measures put in place are really that effective or perhaps the original estimates of up to half a million deaths in the UK were a complete fantasy. Or a scare tactic. We may never know. The source of the models, the wild and the moderate is Professor Neil Fergusson of Imperial College, part of the team that presided over the expensive debacles of Foot and Mouth Disease in 2001 and Swine Flu in 2009.

If, however, Sweden and Japan hold their nerve and get through this with similar levels of mortality to other countries, we are going to have to ask ourselves — and the modellers — some pretty tough questions.

As it happens, 2020 was on track to have a below average death rate, so the effect of the virus is unlikely to even be visible on long term mortality graphs. Since the vast majority of those succumbing are in their 80s and have multiple pre-existing health challenges, they would have made up a fair proportion of this year’s mortality figures anyway, even without this new virus. So, the overall mortality rates are very little changed, if at all, and yet the economic damage is enormous!

Journalists, judges, doctors and scientists are starting to question the wisdom of the current panic. They too are asking whether the cure might not be worse than the disease. Here is what they are saying…

Are we behaving rationally?

Trevor Kavanagh, the political editor of the sun, broke rank this week, with an article headlined: Hysteria has forced the UK into lockdown, crashed the economy and will kill more than coronavirus.

Are we walking blindly into a Police State?

Lord Sumption, former senior member of the judiciary. eloquently explains how we are at risk of descending into authoritarianism.

Prof. Dr. Sucharit Bhakdi is a German professor of virology and epidemiology. In this open letter to the Chancellor of Germany he points out the following:

Can we justify spending 10 to 100 times more on a COVID-19 patient than we do on any other?

Dr Malcolm Kendrick, doctor and author, has written an insightful post on the economic perspective of Covid-19. In it he looks at the cost of saving lives during the Covid-19 pandemic, using the NICE model for affordability which aims to evaluate priorities for health spending that produce the maximum benefit.

*Are we witnessing a fiasco in the making? There is a desperate need for good data.

Dr John Ioannidis is an highly acclaimed epidemiologist from Stanford University (his Wiki entry is worth a read) and was profiled in the BMJ in 2015 where he was described as “the scourge of sloppy science”.

He stated in a recent online posting that the worldwide attempt to control the Covid-19 pandemic may be an overreaction and a ‘fiasco in the making.’

In this interview Ioannidis explains what the uncertainties in the data are and explains that the likely death rate from Covid-19 is probably close to that of seasonal flu.

If you have the time, and like proper science, then this is certainly worth listening to.

If you come across anything else worth sharing, please do post it below.

Dr Jay Bhattacharya (Stanford) is working on a population survey to find out how many people have been infected and recovered. He points out that without it we cannot predict if the likely number of US deaths will eventually be 2 million or 200,000. If we get it wrong, the economic ‘cure’ could end up being more deadly.

Sky News: Sweden determined it has smarter strategy for dealing with COVID-19

“But while Britain went into lockdown, Sweden stood firm.

State epidemiologist Anders Tegnell, the doctor in charge of the strategy, told me a computer simulation is only as good as the data put in and the assumptions made, and the Imperial College scientists had got their numbers wrong.

He said: “Compared to us it is hugely pessimistic. I don’t think any curve in any country has gone as bad as Imperial said it would.

“I just don’t think there is a real connection between lockdowns, closing borders, closing schools and being safer.”

The strategy has huge support from the public.”

BBC Coronavirus: Why Dutch lockdown may be a high-risk strategy – Another country approaching the virus differently.

12 thoughts on “Coronavirus hysteria – is the cure worse than the disease?”