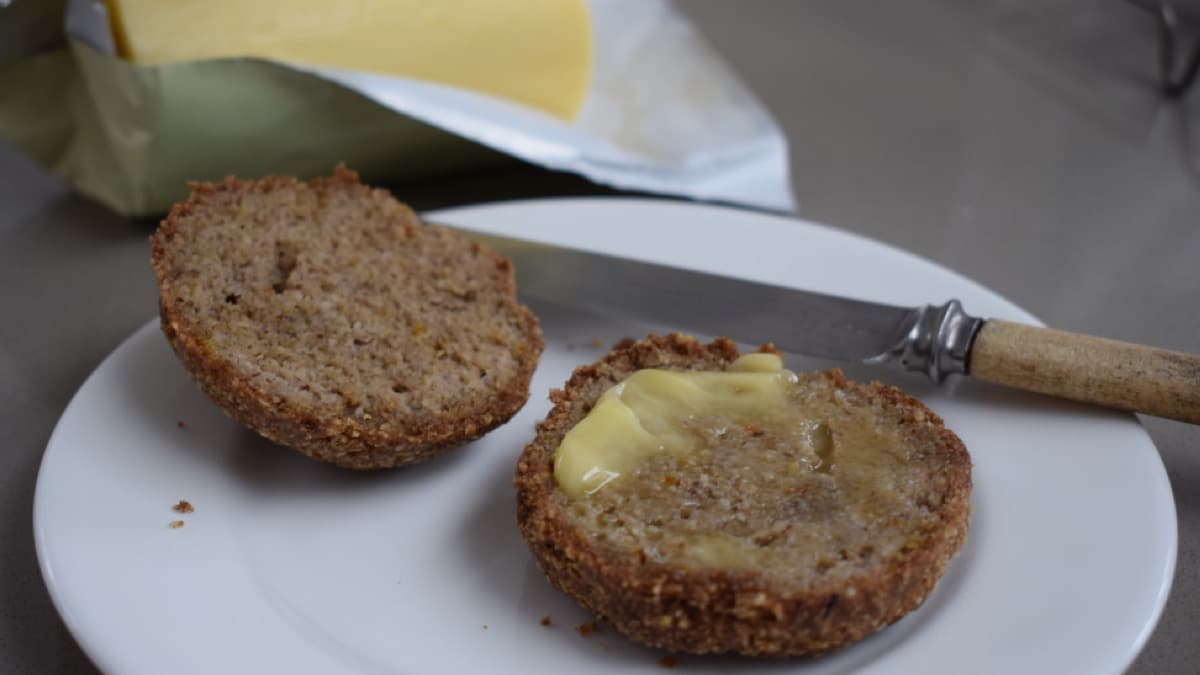 This recipe makes perfect little substitutes for wholemeal rolls, yet is gluten-free, low-carb and ketogenic. They have the springy texture and open structure of normal gluten-containing bread and are robust enough to spread with butter, make sandwiches or toast under the grill. All-round brilliant and delicious.

While nutritious, ground almonds make up the bulk of the grain substitution, the binding quality comes from approximately 15% psyllium seed husk — a kind of dietary fibre obtained from the seeds of the herb Plantago ovata. Psyllium husk swells when wetted to form a mucilaginous paste which is soothing on the gut and much more gentle and healing than harsh roughage like wheat bran. It is an essential part of this recipe as it provides the elastic properties associated with gluten. Along with egg this helps trap bubbles produced by the baking powder, allowing the dough to rise in the oven.

The result: dinky rolls with all the versatility of wholemeal bread. Use for mini sandwiches or burger buns. One word of warning: their high-fibre content makes them quite filling: a boon if you are trying to lose weight.

Mix all the dry ingredients thoroughly in a bowl

Slowly pour in the boiling water and mix thoroughly.

Leave to stand for a few minutes for the psyllium to absorb the liquid and expand a bit.

the dough should be thick and sticky now. Separate it into balls and roll them to shape in your hands.

Remove from oven and place the rolls on a cooling rack

The rolls will keep for several days. Store them like you would ordinary bread. They can be cut and toasted. Great for bacon butties, mini-burgers, cheese and tomato, tuna-mayo. Serve as a side with soups or stews. Neat for lunch boxes.

Psyllium seed husk is a source of soluble fibre and is used as a laxative, but with each roll containing only two to three grams you are unlikely to notice any effect. Still, not everyone tolerates fibre well, so it is worth taking note of any gut disturbances. If you suffer from a functional bowel disorder (Crohns, UC) you may be best discussing this recipe with your practitioner first.

We learned this recipe from friends of ours who got it from Mira over at My PCOS Kitchen – Guilt-free Low-Carb and Keto Recipes – go and see her photos and recipe tips and leave a comment for her for this great recipe!

I just made these rolls (with seeds) and flatbreads using a variation on the main recipe (above) by making the following adjustments:

The result was great! More dense than normal ciabatta but definitely captured the flavour. I made a double batch. With half I made the 6 rolls, topping them off with seeds. With the other half I fashioned two flatbreads, pressing dimples in the top. I was concerned they might not bake right through so made them quite flat. The resulting ‘loaf’ was really nice.

We sliced it into fingers and had it with baked goat’s Camembert. Delicious!

I have just made a Hot Crossed Bun version of these buns, and want to add a couple of factors to take into account in that regard.

I added 40g glycine, as a sweetener, to the dry ingredients, and teaspoon of dried mixed spice, along with 40g currents and 25g peel (which was sweetened), so the resulting buns are not anywhere near as low in carbs as the savoury version above. Nevertheless they are far lower in carbs than any commercial version, and they taste lovely. HOWEVER – they look burnt! So, I suggest turn the oven down to 160C and check them after 20 mins, and 25 mins so that they don’t actually burn. Mine look burnt but they taste perfectly great! I have not yet found a way to make a workable cross on the top, so… let’s gloss over that detail, even though I have certainly made these for Good Friday.