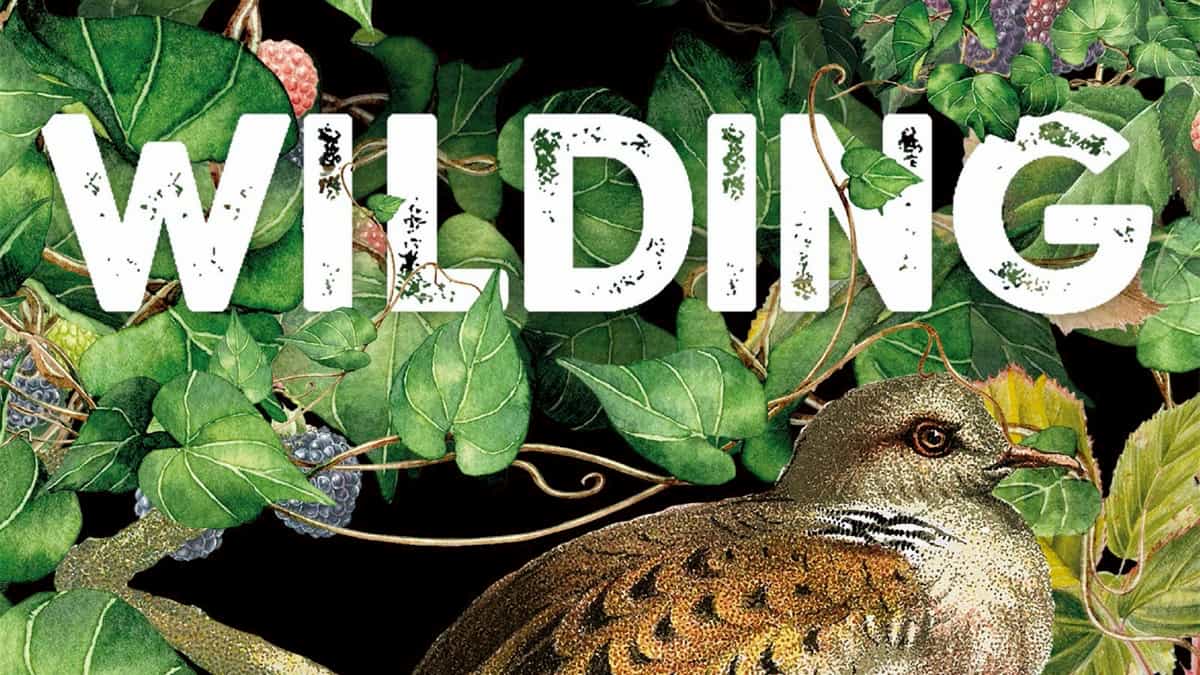 “For anyone suffering from the sense of helplessness in the face of species decline Wilding is a bright clearing in the closed-canopy forest of environmental gloom.”

Since 1970 populations of all mammals, birds, reptiles and fish have fallen by an average of 60%, and a recent global review found that 40% of insect species are now facing extinction. The scale of the problem and the daunting task of avoiding what scientists are calling a sixth mass extinction event appears insurmountable. Piercing this gloom Isabella Tree’s book Wilding shines as a beacon of hope, for it details the remarkable transformation of the 1400-hectare country estate at Knepp Castle in the South of England, owned by her husband Charlie Burrell, from an intensive but ultimately unprofitable mixed rural farm into one of the most important wilderness restoration projects in the world.

Biodiversity and landscape management is largely left to natural forces, but importantly this includes large free-roaming herbivores such as deer, ponies and ancient breed cattle which act as a kind of proxy for the extinct megafauna of Britain. In so doing, they have demonstrated that ideas taken from vast projects like Yellowstone National Park in the USA and Orstvandarsplassen in the Netherlands, can be successfuly adapted to the more intimate landscape of Southern England. Furthermore, they have helped overturn a centuries-old assumption that the original landscape of Europe was closed-canopy forest.

Serendipitously, the start of their project in 2001 coincided with the publication in English of Dutch ecologist Dr Frans Vera’s ground-breaking book Grazing Ecology and Forest History which was causing ructions in the ecological and conservation sciences by insisting that the prehuman landscape was not the long-assumed climax forest but rather a dynamic patchwork of open grassy glades and scrubland driven by foraging and grazing herbivores. Dr Vera’s thesis is that animals — and especially large herbivores — are essential to creating such biodiverse landscapes. Indeed, Vera argues that the richness of the pre-human environment can only be restored if herbivores are free to interact with the landscape. As Vera explained to Charlie and Isabella when they met him, “Without animals you have impoverished, static, monotonous habitats with declining species. It’s the reason so many of our efforts at conservation are failing”

Without animals you have impoverished, static, monotonous habitats with declining species. It’s the reason so many of our efforts at conservation are failing

Emboldened and excited, the couple set about introducing herds of deer, Exmoor ponies, long-horn cattle and an ancient breed of pig, all of which roam freely and breed outside all year round with minimal human intervention. The animals established themselves quickly, leading to scenes reminiscent of the Serengeti, with crows perched on the backs of the wild cattle, stags rutting in the glades and pigs diving for clams in the river. All these herbivores provide essential ecological functions replicating the extinct or marginalised wild native fauna: grazing, moving, churning soil, debarking trees, pruning thickets, distributing seed; and in the wake of this activity has followed prolific biodiversity. Isabella Tree explains that even cow-pats behave differently at Knepp: free of the worming medicines required on conventional farms, the animal waste provides food for dozens of species of dung beetle (Charlie triumphantly identified 23 in just one pat) which burrow deeply, enriching the soil beneath whilst attracting many species of insectivorous birds including, for the first time at Knepp, little owls which are specialist feeders on such beetles.

Incredibly, considering the relatively brief time the project has been in operation, Knepp now boasts sixty-two species of bee and thirty species of wasp, eleven of which are of national conservation importance, along with the UK’s largest breeding population of Purple Emperor butterflies attracting lepidopterists from all over the world. A study in 2013 (just 12 years after the project began) identified 400 species in one weekend, amongst which thirteen bird species on the International Union for the Conservation of Nature (IUCN) red list, including nearly 1% of the UK’s nesting nightingales. Knepp is probably the only place in the UK with an increasing population of turtle doves. So impressive are the achievements at Knepp that it has been singled out by the UK government Department for Environment Food & Rural Affairs (DEFRA) in its 25 year Environmental Plan as an outstanding example of ‘landscape-scale restoration in recovering nature’.

Importantly, Wilding documents not only the remarkable changes that have happened at Knepp, but the intellectual revolution in the ecological sciences that has taken place in the same time frame. For at least a hundred years the orthodox view has been that the landscape of Europe prior to man was dominated by closed-canopy climax forest: that mythical image of the impenetrable wild-wood we all carry around in our imagination. This deeply-held assumption has gripped conservation priorities for decades, leading, for example, to the demonising of herbivores in restoration projects because their grazing prevents natural forest regeneration.

Perversely, though, the kinds of closed canopy forests that are produced in the absence of herbivores, tend to be low in biodiversity compared to human-made environments such as meadows, field margins, coppice, heathland and open ponds; to preserve the species found in these unnatural habitats authorities have promoted expensive and time consuming human management programmes. Project grants have consequently been target driven: What species are we trying to preserve? What management strategy will achieve it? So, when Charlie came forward with proposals to put herbivores on the land and ‘let nature take its course’ many funding bodies, though curious, were unable to help.

In the last two decades, however, things have started to change. The revolutionary idea at the heart of Frans Vera’s work is that the original landscape of Europe consisted of open woodland-pasture created and maintained by animal activity. Once grasped, this hypothesis makes much more sense and provides a rational for using herbivores to manage complex environments from ancient meadows to sensitive wetlands, rather than through human intervention. For traditional conservationists the ‘hands off’ approach is deeply disturbing, but the potential is truly exciting. Isabella Tree deftly outlines how one hundred years of apparently settled ecological science is being overturned in light of these new ideas, giving the reader a sense of how scientific revolutions actually take place.

Without natural predators populations of these wild-living herbivores have to be controlled by man, giving rise to some excellent meat which they sell locally (see their click and collect online shop here). Such meat exceeds organic, free-range and grass-fed standards having more in common with wild game. Although no longer functioning as a farm, Knepp demonstrates that meat production need not be associated with environmental damage, indeed it can directly contribute to the best conservation practises.

The tale that Tree tells is one of transformation, not only of the land and of ecological science but also of the psyche. “For the first time the park restoration showed us, we were doing something with the land, rather than battling against it,” she explains. Instead of looking out onto ploughed soil and farm machinery Isabella describes the joy of witnessing clouds of butterflies rise from a meadow and of the haunting noises of wild animals in the night. Not only has the project restored the land but it has repaired the souls of Tree and Burrell, giving them an inspiring sense of optimism about the future.

For anyone suffering from the sense of helplessness in the face of species decline Wilding is a bright clearing in the closed-canopy forest of environmental gloom.

Wilding is available in paperback, hardback and Kindle edition.

At the time of writing, Wilding had received over 420 (89%) five star reviews on Amazon

What the press are saying

‘One of the Landmark ecological books of the decade’