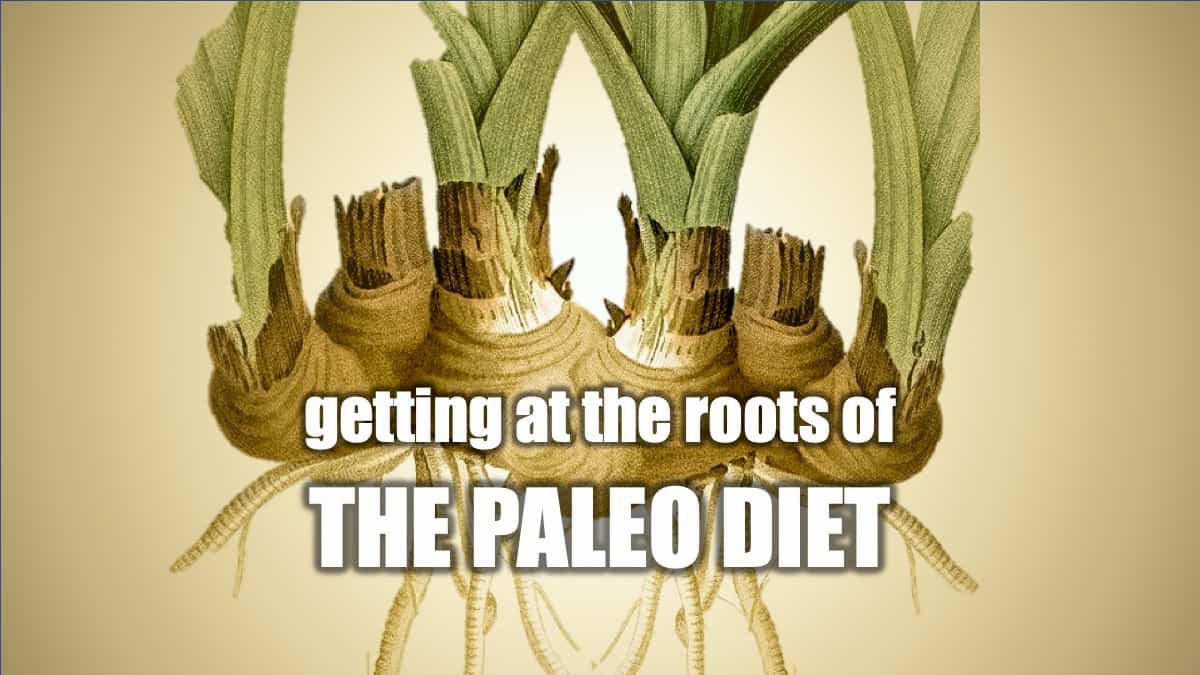 The discovery announced this week of 170,000 year old remains of cooked starchy tubers in a South African cave has reignited the debate about the composition of the original human diet, but it has also given the media a chance to take a rather poorly aimed swipe at the Paleo Diet. Here’s what they have been saying:

For what was supposedly purely scientific journalism there was rather a lot of jabs and digs in the articles for my liking.

The research itself is very interesting. Analysis of the charred remains which came from primitive fire hearths in the caves revealed that they came from a rhizome of the species Hypoxis angustifolia, an evergreen plant also known as the African potato. This was particularly exciting as plant remains do not tend to preserve well compared to animal bones, so this adds to a limited area of knowledge about the kinds of plants that were exploited by our human ancestors.

Rhizomes are a kind of underground storage organ similar in shape to root ginger or turmeric. Hypoxis species are abundant in South Africa and some have edible roots. The evergreen varieties would be easy to find year round and are relatively easy to dig up. Some species are starchy and quite energy dense at around 500 kJ per 100g (120 cal/3.5 oz) — similar to modern potatoes, although as you can see from the photo above, much smaller in size. The researchers estimated that a couple of hours collecting would provide an entire day’s calories.

Individually the rhizomes are not very big, so presumably a large number would have needed to be gathered before roasting in the embers of a fire. Roasting was necessary as Hypoxis rhizomes are inedible when raw.

So, does the Paleo Diet need to be rewritten to include root vegetables?

No! This is just another example of Fake News from the media.

Arguing that the discovery of these 170 000 year old cooked roots “changes our thinking about the paleo diet” or as New Scientist put it “This finding suggests the real “paleo diet” included lots of roasted vegetables rich in carbohydrates, similar to modern potatoes.” — says more about the media’s ignorance of the subject than anything else.

Likewise, The Telegraph’s “Why a true Paleo Diet should include carbs, according to archaeologists” implies that the Paleo Diet “has got it wrong”. Well, Telegraph Science Editor Ms Sarah Knapton, you should do your research first! And while I’ve got your ear, tell me, when did you stop beating your husband?

Why is this fake news?

Because the original Paleo Diet has always included carbohydrate-rich foods such as root vegetables, nuts, berries and honey. It has never been primarily low-carb, ketogenic or exclusively carnivore.

Many of the media reports have suggested that Paleo avoids starchy carbohydrates in favour of animal proteins but this is not necessarily the case. The paleo diet fundamentally recommends only eating foods that would have been available to humans for the 2 million years of evolution prior to the adoption of agriculture. Hence no grains, legumes, dairy, vegetable oils and refined foods such as sugar. Paleo diets are not necessarily higher in animal products, although they tend to be to satisfy protein requirements but they do encourage vegetables. Many paleo Facebook support groups go out of their way to emphasise that they are not low-carb or keto, and embrace carbs from nuts, seeds and root vegetables.

The Times article is titled “How Stone Age humans turned to comfort food” — which shows a wilful overlaying of modern pop-psychology — considering carbs as ‘comfort’ foods (you see how comforting it is if I take away your cakes and biscuits and give you a plate of charred rhizomes!) — with the reality that such foods would have been a matter of life and death: If the South African cave dwellers didn’t find enough calories they starved to death. Equating that reality with ‘comfort eating’ is banal.

Silicon Republic went for the following: “Early humans ate a lot of meat but also balanced out their diet with a starchy plant“. Balanced out their diet? The ridiculous implication is that these cave dwellers were eating tubers to offset some deficiency or harm that might come from eating too much meat! There is nothing in this discovery that implies such a thing. “Balanced diet” arguments are fatuous and contemptible, akin to arguing in a custody battle that “I’m only thinking of the children”.

What does the real Paleo Diet say, and how does this new research fit in?

From the beginning, the paleo diet hypothesis has argued that many modern chronic diseases — the so called “diseases of civilisation” such as diabetes, cancer and heart disease — may be caused by a genetic mismatch between the foods we evolved to eat and those that have become common in the modern Western diet, and that eating closer to the diet we are adapted to, may protect us from such diseases.

From a genetic standpoint, humans living today are Stone Age hunter-gatherers displaced through time to a world that differs from that for which our genetic constitution was selected… Our evolutionary maladaptation …acts as a potent promoter of chronic illnesses: atherosclerosis, essential hypertension, many cancers, diabetes mellitus, and obesity among others.

Boyd Eaton, Loren Cordain and other paleo diet pioneers based much of their research on ethnographic data from hunter-gatherers arguing that such tribes could provide us with evidence of pre-agricultural eating patterns. It has been noted for over two hundred years from hunter-gatherer tribes as well as archaeological evidence that pre-agricultural people were virtually free of the chronic diseases of civilisation — cancer, heart disease and diabetes — and studies of modern hunter-gatherers may, therefore, allow us to reconstruct the kinds of diet and lifestyle our prehistoric ancestors were genetically adapted to.

Here is some such data:

Analysis of hunter-gatherer tribes revealed a wide variation in carbohydrate intake with some tribes such as the !Kung, Gwi, and proto-farmers such as the Kitavans gaining nearly 70% of their calories from carbohydrates, while at the other extreme the Inuit’s traditional diets provided fewer than 5% of calories from carbs. So, the paleo diet has always included root vegetables. The new evidence of cooked tubers only emphasises that this has been the case for over 100 000 years.

The claim made by Cordain and others is a little more nuanced than New Scientist would like you to believe:

Our analysis showed that whenever and wherever it was ecologically possible, hunter-gatherers consumed high amounts (45-65% of energy) of animal food. This …produces universally characteristic macronutrient consumption ratios in which protein is elevated at the expense of carbohydrates.

In other words, where they had access to animal protein it was often preferred. In many tribes roots and tubers were certainly eaten, but were considered fall-back foods — consumed somewhat reluctantly when the hunting was not so good or more desirable foods were in short supply. That said, it is inaccurate to imply that hunter-gatherers prefer low-carb foods, as the most popular food of wild living humans is actually honey! Fruit such as baobab and berries come in close to meat. (See below)

Interestingly, it is also notable that the least preferred food of the Hadza is tubers! But, again, it is important not to jump to conclusions. The tubers available to the Hadza were low-calorie, low-starch foods: quite insipid and uninspiring (See my analysis of Hazda tubers nutrition here). Hypoxis roots being more starchy and more calorie dense may have been more popular on the South African caveman menu. Who knows?

In short, this new research is interesting precisely because it shows that humans evolved on a simple diet of minimally processed wild-type foods.

Does it mean the paleo diet needs rewriting. No. Does it mean we should all go vegan and eat lots of potatoes? No. The cave dwellers were not that stupid. They ate to survive making use of what was available to them. They did not only eat Hyoxia roots, which would have only made up a fraction of their diet and they certainly didn’t turn their nose up at meat when it was available!

So, at its root what is the Paleo message? Eat real foods — none of your processed crap thanks. Even a few burnt tubers are perfectly acceptable.

What to Eat on a Paleo Diet