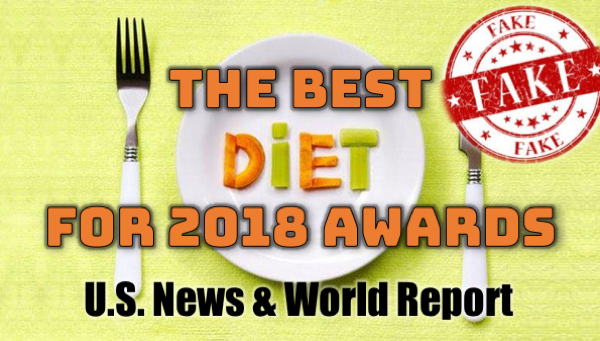 Millions of people go on a diet each year in the hope of shifting some unwanted weight. Although some diets work in the short term many people find that the weight creeps back within a year, or that they are just too difficult to stick to. So which diet is best for shifting the pounds? Well it depends who you ask.

U.S. News & World Report put together a panel of health experts every year to evaluate the most popular diets in the U.S. This year they voted Weight Watchers as the best diet for short and long term weight loss, along with Ornish, DASH and the Mediterranean diet for general health and avoiding heart disease and diabetes. The panel of ‘experts’, it seemed, had a clear preference for plant-based diets placing low-carb diets such as Atkins and Paleo at the bottom of their list. The critics slated these diets saying they were concerned about malnutrition, bad breath and constipation, with some also claiming ‘there’s no evidence they work’.

This study by researchers from University of Maryland, Baltimore, and University of North Texas Health Science Center, set out to review the evidence base for the previous U.S. News & World Report. They focused on the available evidence for any of the diets that was not specifically calorie restricted i.e. those where you can eat as much as you like within the dietary pattern. One reason for this is that calorie restricted diets are notoriously hard to stick to and have a high drop out rate, whereas calorie-unrestricted diets have the potential to become lifelong eating patterns.

The researchers identified suitable studies for: (1) Atkins; (2) Dietary Approaches to Stop Hypertension (DASH); (3) Low Glycemic-Index; (4) Mediterranean; (5) Ornish; (6) Paleolithic; and (7) Zone Diet
When they looked at all of the available data, guess what they found? The evidence was almost exactly the reverse of what the expert panel had concluded with Atkins diet coming out best with good evidence of both short and long term weight loss.

The typical weight loss observed in these studies over the short and long term was somewhere between 5 to 9%.

On the other hand the main plant-based diets had little evidence and among the few studies that exist weight loss was minimal. DASH and Ornish diets – which the U.S. News & World Report experts rated highly – had only three studies between them with DASH only achieving a paltry 0.3% weight loss, and Ornish just 3%. Zone was little better, with three studies averaging 4% weight loss in the short term, but only 2.5% in the long term. The low Glycemic Index diet with just two short and one long term study achieved only 4% weight loss.

There was only one study for the Paleo diet, but it clocked in one of the highest weight losses among all the studies reviewed, averaging 10% loss over both short and long term.

The authors, quite rightly, point out that apart from Atkins, the others diets have too few studies to reach definite conclusions, but it is notable that the low-carb diets (Atkins, Paleo and the low-carb Mediterranean) came out tops. Clearly the U.S. News & World Report experts were ill-informed or biased plumping for low fat diets and avoiding those don’t limit animal products.
Which leaves it to me to make a final decision. So here is my best diet for weight loss 2018 podium, based on the actual scientific evidence: