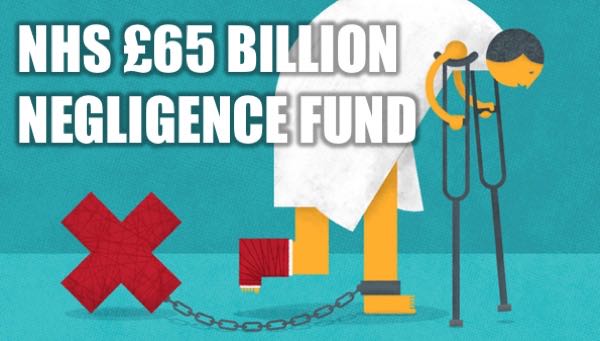 Well January ended with a bang, and its a bang I’ve been banging on about for the last couple of years (!): The budget set aside for NHS negligence claims is growing so rapidly that it threatens to bankrupt the system. Several people I’ve mentioned this figure to have looked at me in disbelief and suggested I must be mistaken. Well now it’s all over the headlines, so…

Yes, £65 billion – you read that right – must be set aside for negligence claims. Unsurprisingly, perhaps, managers have begged the government to limit payouts for such claims to protect the health service.

Part of the ‘problem’ is recent changes in the law which mean that the damages paid out in some cases have tripled. But patient groups have acted angrily to the idea that these were due to oportunistic claims saying the assessments were based on an independent assessment of future care needs – which could include round the clock care for those injured at birth – and were not “some kind of windfall”, leading the Telegraph to say:

Something is clearly rotten in the state of Denmark. Part of the problem, no doubt, is that “the NHS needs more money”. Well of course. The NHS always needs more money. Was there ever a time when the NHS did not need more money? But can we really afford to pour money endlessly into an apparently bottomless pit?

Surely the real question is why are so many mistakes are being made?

How come so many of the wonderful NHS staff are negligent in the first place? Is it really just about money? Or is the whole system flawed?

The following article by Jack Tagholm-Child is reblogged here in full as he makes some good points about the problems with ‘our wonderful NHS’ and suggests there are better alternatives out there. Isn’t it about time we started taking these ideas seriously?

The NHS Myth: On Health the Rest of the World Does it Better

Albert Einstein is broadly credited with the commonly used adage: ‘the definition of insanity is doing the same thing over and over ­again and expecting different results.’ On this account the way in which the British state provides healthcare to its citizens is, by now, surely insane.
‘The NHS is facing a winter crisis’ is a headline one gets used to seeing every year in the UK. Although, this year the term winter crisis has been used significantly more than other years. According to Sky, in the first four days of 2018 the phrase has been used more times, by UK Newspapers, than in the entire years combined from 2003 to 2008.

Indeed, the NHS does appear to be under even more strain than is usual. The number of attendees waiting 4, or more, hours in A&E has risen significantly – 15% in December of 2017, the joint worst figures on record.

Analysis from the Kings Fund suggests this extra strain is due to a confluence of factors: an ageing and growing population, and simply citizens using NHS services more. Extra funding being provided to the NHS became decoupled from the increases in use around 2010, and increases in funding have remained below increases in use ever since. This seems the likely cause of the current, particularly severe, stress on NHS resources.

Would allocating more money to the NHS alleviate the problem? Yes, for a while. But is it worth it? No. The problems with British healthcare provision is organizational, not monetary. Bourne out by the fact that health outcomes have consistently lagged behind other comparable countries, even in periods of ‘proper’ funding.

The NHS is like those famous American Muscle cars, can’t turn corners, unreliable, aren’t actually very fast and burn through fuel faster than a B-52. You could choose to keep spending vast sums running the thing, or you could buy a cheaper, more reliable and better performing European alternative. Coincidently, this is exactly what’s on offer – although it wouldn’t necessarily even have to be European.

The UK has chronically lagged behind its European, and American, and Australian, and East Asian counterparts, in its cancer, and other major disease, survival rates, for years. In fact, for decades. A 2017 study led by the Swedish Institute for Health Economics found that between 2000 and 2007 the UK had a lower 5 year adult survival rate for 9 out of 10 types of cancer than the European Average – the UK being above average on Skin Cancer.
Another study, in 2015, by the London School of Hygiene and Tropical Medicine, found the same. In the period from 1995 to 2012, comparisons between the UK and 5 other countries – Australia, Canada, Denmark, Norway and Sweden – found UK 5 year cancer survival rates to be nominally between 5% and 12% lower, depending on the type of cancer.

This is huge when you consider percentage survival rates for cancer’s are often, of course, low anyway. If a survival rate for a certain type of cancer is around 30% in one country and 20% in another – which is approximately the difference between the UK and the other countries, for certain cancers, in this particular study – then care in the UK is 33% less effective. Indeed, this is the case for stomach cancer, when you compare the UK to Australia.

If you’ll just bear with me through a few more numbers. According to the OECD’s most recent figures on certain cancer and cardiovascular disease survival rates the UK regularly ranks around 20th – Exactly 20th for bowel and cervical cancer, 19th for breast Cancer, 22nd for Heart Attacks, 27th and 25th for hemorrhagic and ischemic strokes respectively. Always notably behind comparable countries like France, Germany, Japan, The United States and so on.

There are, of course, lies, damn lies and statistics. However, when you are consistently ranked below all the most comparable countries, on almost all major diseases and their variations, over a sustained period of time, and by a multitude of sources, to not believe your fundamental mode of healthcare delivery may be faulty, at best, and require changing, is flat out delusional.

At this point one should stress, not that it ever makes any difference, the NHS is staffed by some truly outstanding individuals. They are not the problem – at all. It is simply the system of provision which is hindering health outcomes. Much like Communism is preventing North Korea from being like South Korea. They are the same people.

What desperately needs to be understood in the UK’s healthcare debate is that not having the NHS in its current form, is not the same as US style privatization. God forbid. Healthcare provision can be provided in a far more efficient fashion, and still be accessible to all. There are all sorts of different types of healthcare provision around the developed world, which straddle the line between being mostly publicly or privately provided.

It’s all about incentives. What is often under emphasized, in debates between the public and private provision of a goods and services, is that what makes the market in general so much more efficient is competition. There is nothing inherently magical about markets themselves, aside from the fact they tend to more easily facilitate competition. This can, on rare occasion, be done within the public sphere.

Here much of continental Europe shines the way forward. (One interesting note: it is curious that, in the main, those on the left in the UK, who are usually very complimentary about the European social model, form the most vociferous opposition to any moves towards what we might call a European model of Healthcare. They insist on an archaic form, and disproven ad nauseam by history, of total state control.)

France is perhaps the best example, as it blends a patient centric and choice based schematic – with a healthy dose of private sector involvement – alongside state coverage and provision. It manages to combine great healthcare outcomes – which come from the incorporation of competition, with healthcare for all – which only the state can guarantee. Indeed, one of the most comprehensive comparative studies of world healthcare systems undertaken, The World Health Organization’s 2000 report, ranked the French healthcare system the best in the world.

The French system is universal, in so far as it provides healthcare for all. The use of government in its delivery is considerable, but not excessive (40% of French hospital beds are provided by charities or for-profit companies.) But there is perhaps one key difference, which allows the French system to be so effective: employer provided insurance. Although the government will cover anyone who doesn’t have access to employer provided insurance – providing a minimum of healthcare access – many have extra insurance on top of their basic cover. So you have a government set baseline, with options for individuals to supplement their cover with private alternatives.

This is actually remarkably similar to the US system – although don’t you dare tell the French that. At any rate, what is key is that the patient is the focus and can choose his health providers – it’s all about choice.

Belgium, Austria and Germany all have similar healthcare provision, mixing a minimum baseline with private options for more cover. Even in Sweden, a bastion of social democracy, where healthcare is provided most like the NHS, a GP visit costs around £15. When a £10 charge for GP visits was even suggested in the UK all hell broke loose.

Countries often have blind spots, which the rest of the world struggles to fathom. We tend to believe in the UK, our healthcare system is the envy of the world – at least that’s what you hear in the media. Curious then that the majority of developed countries – which rank much higher in healthcare outcomes – use a different model. In the UK we have become addicted to the undoubtedly noble principles the NHS was founded upon. Unfortunately, noble principles don’t save lives. All the empirical evidence points to numerous better styles of healthcare provision around the world. Almost all providing near universal coverage anyway. So let’s do away with all the ideology and just copy what is known to work. Seems almost sensible.

Jack Tagholm-Child
A recent graduate, Jack studied Politics, Philosophy and Economics at the University of Exeter. A Eurosceptic from a young age, he is also interested in all matters relating to the maximisation of human flourishing. He can be found blogging at: https://jacktcsblog.wordpress.com/

Coffee – its light and dark side