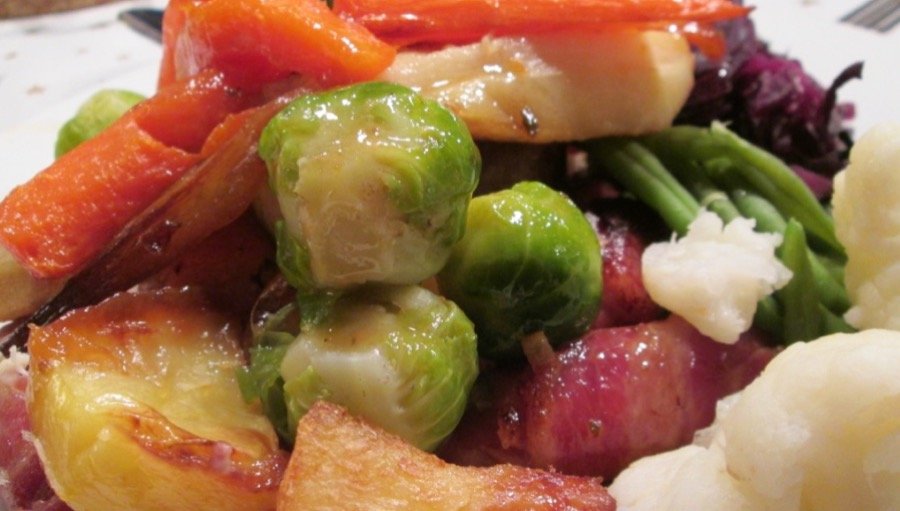 Who doesn’t look forward to Christmas dinner ‘with all the trimmings’? Many people though have an ambivalent relationship when it comes to sprouts. Perhaps more than any other vegetable sprouts deserve the title of marmite of the vegetable world. Love ’em or hate ’em  (and here at Rosemary Cottage we love them) you have to admire them for their nutritional punch.

Brussels sprouts (Brassica oleracea gemmifera) have a reputation for being bitter – especially if you consult their detractors – but it turns out that most of the health benefits of sprouts come from their bitter compounds. We have written an eye-opening article on the incredible benefits of bitter foods which I recommend you read if you have not already done so.

If you, your partner or your kids don’t like sprouts but you want to eat more of them (“‘cos they’re good for you”), then try serving them with a creamy cheese sauce or something similar that everyone likes. Believe it or not, this method has been studied as a way of conditioning children to like bitter flavoured vegetables – by pairing bitter foods with something more appealing kids gradually get to like the sprouts on their own. This is termed associative conditioning, and works with adults too.  [Capaldi-Phillips, 2014]

Some of the most important bitter compounds contained in sprouts (along with other cruciferous vegetables) are the glucosinolates. These are sulphur containing compounds which impart the somewhat repellant cabbagy smell that can fill the air when they are cooking. On digestion the glucosinolates are transformed into bioactive metabolites such as isothiocyanates which have the remarkably powerful ability to stimulate phase II detoxification enzymes – especially glutathione – as well as inhibiting cell division. This gives them considerable anti-tumour potential and they have  been shown to reduce the risk of a range of cancers, including breast and colorectal cancers. [Johnson 2002, 2016, Nijhoff 1995)]

Although Brussels sprouts contain vitamin C which is detectable in the blood shortly after consumption, they have additional antioxidant effects which are effective in mopping up free radical oxygen from cells, leading to reduced DNA damage. [Hoelzl, 2008] Multiple antioxidant components have been identified and have also been shown to protect brain cells from oxidative stress [Kim, 2008]

Brussel sprouts are considered an excellent source of folate which is  essential for maintaining detoxification and methylation pathways. In pregnant women sufficient folate is necessary to prevent neural tube defects in the developing baby. [Wilson, 2003].

Natural folate is far more beneficial than artificial folic acid found in supplements. Indeed artificial folate has been linked to weight gain and inflammation [Kelly, 2016] as well as a range of other problems including masking vitamin B12 deficiency. The name ‘folate’ is from ‘foliage’, so eating plenty of leafy vegetables is the most appropriate way to get what you need. Some people need a bit more, due to certain genetic quirks, so supplementation with proper folate (aka vitamin B9) can suit some people, but they still need to eat plenty of green leafy veg too.

For a good overview of natural folate metabolism and some of the negative consequences of folic acid supplementation see Folate by Yen-Ming, 2013.

Over cooking sprouts is a crime for a number of reasons. Firstly, serving up soggy sprouts does little for their reputation. Cook them al dente and your guests will thank you. Secondly, cooking can reduce the quantity of glucosinolates and you want to maximise your intake. That said, lab tests have demonstrated that even after extreme oven drying sprouts maintain their ability to increase detoxification, despite very low levels of glucosinolates remaining indicating that other important but as yet unidentified detox compounds are present in the humble sprout. [Robbins 2011]

Certain epidemiological studies have claimed a weak link between meat consumption and colorectal cancers and these make the headlines, leading to great angst amongst readers or those who still listen to the media that promote such stuff. However, studies that find no link between eating meat and cancer fail to get much media attention at all. Suffice it to say that the link and possible underlying mechanism are far from certain.
One of the potential culprits, if indeed there is any connection at all between eating meat and the development of malignancy, is the heterocyclic amines that are formed meat cooked at a high temperature. They have been shown to induce cancer in colon cells at sufficiently high doses. But, studies show that sprouts and other cruciferous vegetables, have the ability to protect against heterocyclic amine damage, and protect colon cells from this type of DNA damage  [Walters, 2004; Shaughnessy, 2011] which lends credibility to the English tradition of serving meat with two veg – one of which is often cabbage family.

Too much of a good thing

The beneficial compounds in Brussel sprouts are themselves toxins. Most of their benefit comes from stimulating our body’s natural defences – a process known as hormesis, but in high doses these benefits can flip into harms. Eaten regularly as part of a mix of vegetable consumption they are unlikely to cause any problem, but if you eat them exclusively, every day and in large quantities you might run into trouble. Studies have identified problems with thyroid kidney and liver function with rats fed high levels of Brussel sprouts for 4 weeks (a long time in rat years remember). [de Groot, 1991]

Another possible problem of excess sprout consumption is that enhanced detoxification can lead to some drugs, like warfarin, being excreted more rapidly, which could alter their effectiveness. [Ovesen, 1988] A meta analysis in 2012 looked at human studies to date and concluded that

cruciferous plants are safe in humans, with the exception of allergies. Individuals treated with warfarin should consult their physician. [Scott, 2012]

Most of the benefits found in human studies came from eating 200 to 500g of sprouts per day for several weeks. This is at the upper end of what most of us are ever likely to do, even if we love sprouts, so to reach overdose levels you would have to get pretty extreme – not advised!

If you have a spot in the garden – say 8ft by 4ft, you can grow your own sprouts to provide fresh Brussels sprouts throughout the winter. Not only is growing vegetables a healthy activity and very rewarding, it also allows you to eat them when they are at their freshest. In terms of taste alone, once you have tried grow-your-own there is no looking back! Home grown and freshly plucked also cook much quicker, so be warned. It is easy to overdo the super fresh ones.

Here are the ones we are growing in our garden right now:

By growing a range of varieties we extend the harvest from back end of October to February allowing us to eat freshly Brussels sprouts several times per week throughout the winter.

Here is a close up of the stems showing the sprouts at different stages of development:

And here are the ones I picked for last night’s meal:

For more information about growing your own check out the Rosemary Cottage gardening blog here.

1 thought on “Brussels sprouts – Not just for Christmas”