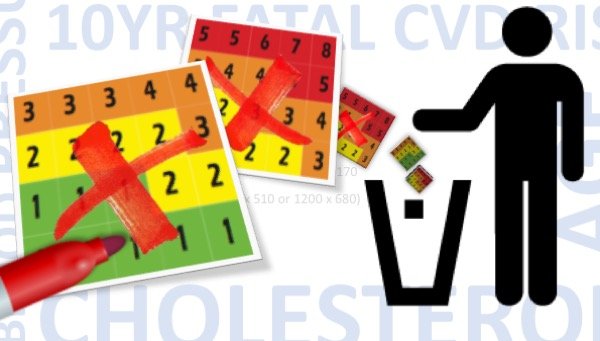 A recent study among the population of Denmark has found that the SCORE (Systematic COronary Risk Evaluation) model for predicting CVD deaths in low risk European countries (see our previous post) overestimates 10 year risk of death compared to what is actually observed by no less than 500% (4.9-fold in men and by 5.5-fold in women).

Another look at the SCORE 10 year CVD risk charts

The SCORE risk model was developed from data looking at deaths directly caused by coronary heart disease (CHD) and stroke (i.e. CHD or stroke needed to appear on the death certificate), but did not take into account deaths where CHD and stroke were contributory factors rather than the main cause.

The Danish researchers, therefore, hypothesised that the discrepancy between contemporary observed deaths and the numbers predicted from SCORE might be due to how deaths are classified.

For example, immediate care following heart attack or stroke, defibrillators and rapid intervention may have increased survival, but not reduced the number of events. They therefore decided to include deaths where CHD was a contributing, rather than a causal factor or where death followed within 30 days of a non-fatal stroke. However, even then SCORE still overestimated the risk by a very large margin.

The SCORE risk system was designed to identify high risk patients (5% and greater risk of death in the following 10 years) as candidates for statin therapy. The authors point out that in the last 20 years CVD mortality has fallen among the Danish population so much that under the SCORE system almost no one falls within the 5%+ category these days. Indeed in Denmark 88% of CVD deaths occurs in people above the age of 75 so outside the predictive range of SCORE which only estimates 10 year risk up to 65 year olds.

This is partly why in recent years we have seen calls for statin treatment to be given to anyone with raised cholesterol, regardless of their SCORE risk. It could be argued that such a move makes sense at the public health level to further reduce CVD deaths, but from the perspective of the individual the benefits are becoming vanishingly small.

What do the Danish findings mean for our example middle aged woman?

In the previous post we considered a middle aged (60 year old) non-smoking woman with a cholesterol of 7.2 and systolic blood pressure of 140. We saw that the SCORE chart gave her a 2% chance of dying from CVD in the next ten years. According to conventional thinking, statin therapy to lower her cholesterol by 3 mmol/L from 7.2 to 4.2 would be predicted to reduce her 10yr risk to 1%.

However, if SCORE is overestimating risk by a factor of 5 (among Danes and presumably other advanced European countries), then the picture looks somewhat different. Moving left three boxes on the SCORE table reduces her nominal risk from 2% (which is really only 0.4%) to the 1% box (which is really just 0.2%).

Either way, from 2% to 1% or from 0.4% to 0.2% represents a 50% reduction in relative risk, so from the perspective of public health the fact that the SCORE chart is overestimating risk makes little difference. However, if the Danish findings are accurate – and there is no reason to think they are not – the absolute risk reduction shrinking to a mere 0.2% is tending to insignificance at the individual level.

To make it clear, a risk of 0.4% means that if you lined up 1000 middle aged women with the same cholesterol and blood pressure as our example, over ten years 4 would be expected to have died of CVD. With statin treatment the number would fall to 2. However, the whole group would need to take statins for those two individuals to benefit.

Again, putting this into perspective, this means:

Risk vs harm, but from whose perspective?

At the population level a CVD death rate reduction of 0.2% represents thousands of people. From the individual perspective, however, is it justified to worry 1000 people into taking unnecessary medication with all the associated side effects for just two to benefit?

The side effects of statins are hotly debated, but there are thousands of anecdotal reports. However, when there are so many people being treated for the benefit of so few even minor side effects need to be taken into account when assessing risk and benefit. The harms of statin therapy include more than just the side effects. To be medicated is to live with the sense that you are ill, that it’s out of your hands, that you have had to hand over responsibility for your health to someone else.

In the last post we saw that improving lifestyle (especially diet) can be as effective, if not more so, than taking statins. For the individual this is often a much better route than statins as taking responsibility for your lifestyle and diet is not only effective, but empowering. Studies have found that patients are much happier improving their lifestyle than they are about being medicated. These facts should be communicated to patients to help them make an informed decision, but they rarely are.

The need to reduce CVD deaths at the population level explains much of the mismatch between the health service emphasis on statins compared to an impartial consideration of the individual’s best interests. The individual wants to feel they have been given enough information to make an informed choice. From the doctor’s perspective statins equate to a 50% risk reduction and he is likely to convey this to the patient, if not as a number, then by instilling the feeling that the cholesterol tests indicate raised ‘risk’ and that statins are ‘needed’ and will be ‘beneficial’. After all there may be  thousands of similar patients in his local health authority which potentially translates into dozens of saved lives – what health professional could argue with that? But to the patient in front of him the absolute benefit can be very small, none at all or actually negative.

In a sense the individual becomes the sacrificial lamb – made to worry and accept medication – for the sake of the whole – the larger patient population.

Returning to our example above, the two individuals who benefited from the statins would, no doubt, be very grateful if they could be sure it was them that benefitted. But neither they, nor anyone else will ever know which two of the 998 survivors were the ones who were saved. What all 998 will be sure of though, is that they were sick and needed medication.

The public health policy rests on instilling the conviction that the risk is individually significant and that statin therapy will be individually beneficial, but that is deceptive if not outright dishonest. There are different risk models, and the Danish study has shown that these may overestimate risk by a large margin. Many patients are worried sick by their doctors when their cholesterol is raised but the reality of the risks are almost never explained clearly. Is that acceptable?

Not in my book.

This is a never ending rabbit hole once you get into it, and I am quite ready to get out of it now, but I felt there were couple of points that needed addressing for completeness. Also, I don’t want to leave the impression that CVD risk is quite as small as I suggested above.

First, death is not the only outcome we should be looking at. Non-fatal CVD (angina, atherosclerosis etc) is worth avoiding even if it does not kill you. The risk of developing some form of CVD is, obviously, much higher than the risk of dying from it, so my extrapolations from the Danish study may be painting too rosy a picture. Furthermore, the inaccuracies found in the Danish study might not apply in the UK, so I need to look at how we calculate the risk in this country.

In practice each country has developed its own version of the CVD risk charts taking into account various studies, population differences and other additional factors. Here in the UK there are a few recognised models to choose from which include risk of developing non-fatal CVD. Interestingly the UK models take into account HDL cholesterol as an additional risk factor which is an improvement on the SCORE chart which used only total cholesterol.

You can click on the image below to go to a UK risk calculator and play around with different models, visualisations and cholesterol values.

Most of the caveats about risk reduction covered in my previous post apply to these different models and I suggest you consider any individual risk reduction in the context of how many people would benefit out of 100 (as I did above for the example middle age woman) to get a better feel for the significance of potential risk reduction by diet or statins.

Helpfully the Edinburgh risk calculator includes a ‘smily face’ display that can help you do just that. So, by way of example, I put in the figures for our middle aged woman before and after statin therapy into the BNF model. (By the way, BNF stands for the British National Formulary – the text book of drugs used by pharmacists and doctors)

The results show that for every 100 women with the same risk factors as our example woman, statin treatment will potentially benefit 2, whilst 94 would have remained free of CVD regardless, and 4 would die whether they took statins or not.

This is a little higher than we found using the SCORE charts in our previous post, but this is for developing CVD whereas SCORE was for CVD deaths. The main point I have been making throughout still stands, which is to consider what such risks actually represent for you as an individual before accepting medication.

So the last part of this question is how reliable are these figures? According to this paper in the BMJ, the BNF model over-predicts risk by about 25% compared to what is observed – which is much better than the Danes found for the SCORE predictions. To correct for this you can take the given risk from the BNF calculator and multiply by 0.8

Plenty to think about and play around with there. Time to stop now.

Gluten, In the News