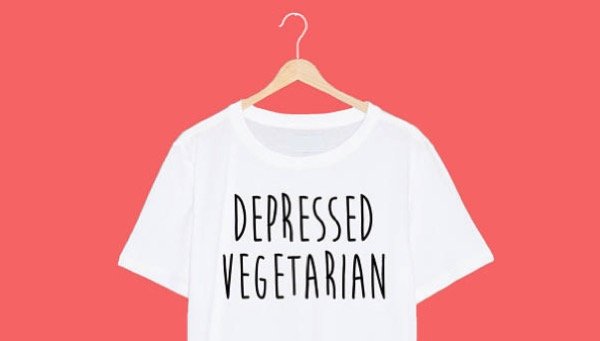 “Vegetarian diets make you depressed” the article said. Tell me about it! Just being around vegetarians makes me depressed, I thought.

The article in question was in Medical Express (Sep 11th). It was reporting on a study of 10,000 people from the UK which found twice the rate of depression among the 350 ‘committed vegetarians’ in the cohort. What was also apparent was that those who had been vegetarian longest – the most committed – had the highest rates of depression. The researchers suggest that low levels of seafood, B12 and high levels of phytoestrogens may be to blame.
After reading this I felt a little sad for all my vegetarian friends, so started digging around to see if there was a support group out there. Well it seems there is, and it’s called the Labour Party…(!)

So believe it or not, Depressed Vegetarians for Corbyn is a thing! Baffling. But at least they are helping each other come to terms with their depression. First up, they can buy one of these beautiful T-shirts:

And there is even a twitter page just for them: https://twitter.com/corbeanies
Tweets by Corbeanies