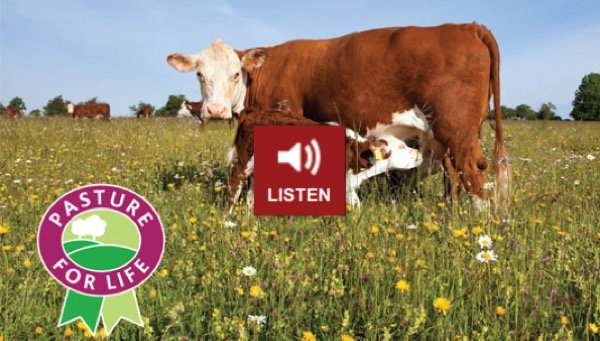 Pasture for Life is a certification standard for 100% pasture reared meat. It is an initiative of the Pasture-Fed Livestock Association which was formed in 2009, when a small group of British farmers decided to join together to extol the wide-ranging benefits of producing meat from animals fed exclusively on pasture. Our friends at Knepp Castle Rewilding Project are part of the scheme and we rave about their meat.

A few months back, one of the other farmers in the scheme, Tom Morrison, was interviewed on the BBC World Service program The Food Chain in an episode entitled ‘Of Maize and Men‘. The programme was focusing on the problems associated with Maize production worldwide and was interested to hear the views of this Pasture for Life farmer who explained why he does not use maize to feed his cattle.

We thought you would like to hear it too so we extracted a clip from the BBC podcast, and have copied the transcript further down if you prefer to read.

Let’s look now at animal feed. In the US cows, chickens, pigs and fish actually eat a lot more of the crop than humans do. About 40% of the maize produced in the country is fed to livestock. It’s a cheap way to feed our animals. But is it the healthiest, or even the most efficient? Here in the UK there’s a small but growing group of farmers who think that the answer to that question is ‘No’, as The Food Chain’s Simon Tulett has been finding out.

Although I pretended not to, I must admit, I did at times feel a little precarious perched on the back of Tom Morrison’s mud-splattered quad-bike as it lurched up a hill to his herd’s main pasture.

Hogshaw (Hill) Farm, about 30 miles north-east of the UK’s city of Oxford, is home to around 90 pasture-fed cows – that means Tom feeds them nothing but grass.

So, I’m slicing through one of Tom’s fields now, on the back of his quad-bike. Some of his cows darting away to escape our path, others looking on, somewhat curiously, as we head out to explore where they spend the vast majority of their time, and take a closer look at exactly what they’re eating.

“There’s red clover here; there’s white clover. There’s all kinds of vetches. Now, if you taste that: that’s sorrel and that produces a – all these things produce a different flavour in the meat.”

Tom is part of the “Pasture-Fed Livestock Association”.  A group of more than 60 UK farmers feeding their cows, sheep and goats from, well, pasture. They say it makes their animals healthier; more on that shortly. But also, that the food they then produce is better for us humans.

“The food scientists tell us that that is the case. There are, in particular, Omega-3 fatty acids, added to that; you get more vitamins in the meat.”

He’s right. Grass-fed beef has about 50% more in Omega-3 fats than grain-fed. Those are the fats generally thought of as ‘healthy’. But enough of us humans, what about the animals? How much healthier and happier are they? To find out, it was back on the quad-bike to see some of the cows sheltering from the wind in one of Tom’s barns.

“That one was born this morning, and we’ve got two calves there and another three here. And you see, at the back, that’s two years of consumption-worth of hay. And that’s all they eat.”

In much of the world, cows are fed on pasture for some of their life, perhaps most of it, but then in the final months they go into barns and are fed on an assortment of different grain products, one of those, of course, being maize.

I wonder if you could explain to us Tom, what happens to a cow when it eats maize?

“They are not designed to do it, they are ruminants. A pig is a mono-gastric animal – a single-stomached animal. A chicken or a turkey or a goose is an animal with a gut, which is designed to process grain. Cows will go for maize – they love maize – it’s very palatable, but it doesn’t do them any good and it doesn’t do the meat any good. Sometimes you come down in the morning to my neighbour’s barns and you see a kind of dew that’s formed on their backs; they’re sweating. Their bodies will be working much harder to process a concentrated food that they are not designed to process.”

Now, you might be thinking: Surely Tom’s beef costs more than the meat produced in huge industrial farms where cows are fed on cheap maize?

“It should, if one believes in supply and demand, but I have already mentioned that I have a low-cost system, so when the customer comes in to the butcher who I sell to, they are not paying any more than they would in one of the big supermarkets. It is so simple, my low-cost system. A contractor makes the hay, that’s my biggest cost during the year.”

And where there are cows and food, there’s manure. Tom’s cows drop theirs on the fields in which they graze, which puts crucial nutrients back into the soil, without him lifting a finger!