A new study from Australia finds yet again that vegetarians don’t live longer than meat eaters.
We previously reported on a 2015 paper examining mortality among vegetarians in the UK based on data from the large Oxford EPIC study, which found no evidence for reduced mortality compared to the general meat-eating population. [see our post UK vegetarians DON’T live longer than meat eaters study finds]
Now a similar analysis from the Australian 45 and Up Study has come to the same conclusions: there is no significant difference in all-cause mortality between vegetarians, semi-vegetarians, pescatarians and regular meat eaters in Australia.
The 45 and Up Study has data on more than 250,000 men and women aged 45 and over from New South Wales (an incredible 10% of the population!), who have been studied since their enrolment in 2006. Baseline dietary questionnaires were recorded along with participants’ ongoing medical records.
In this new paper, published in Preventative Medicine in April 2017, a team from Sydney University grouped participants as follows: vegetarians (eating no meat or fish, n=1523), semi-vegetarians (meat or fish less than once per week, n=2015), pescatarians (no meat, but fish consumed at least once per week, n=1122) and regular meat eaters (eating meat or fish at least once per week, n=238,436). Mortality from all causes was then compared between groups.
The data was corrected for a number of confounders including sex and age group, education level, marital status, remoteness, country of birth, smoking status, physical activity and alcohol category, cancer, hypertension and cardiovascular and metabolic disease.
Here are the results in a cute little histogram created by yours truly. 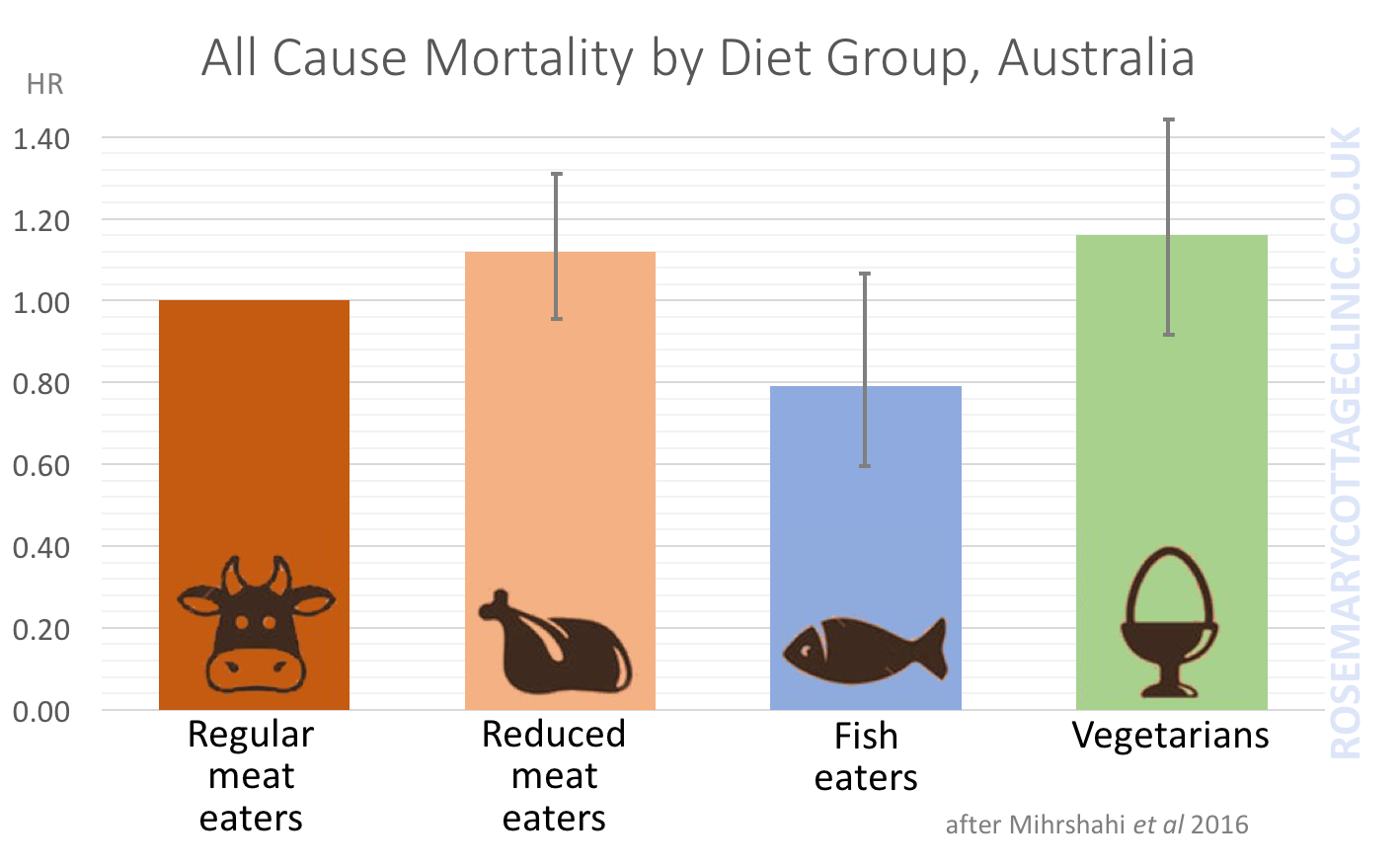 (If you think you have seen this before, you are probably remembering the similar one from our 2016 post about UK vegetarians which I will include at the end of this post for comparison)
At first glance the Aussie graph seems to suggest that vegetarian and semi-vegetarian diets increased mortality by 10 – 15% compared to regular meat eaters, whilst eating a pescatarian diet seemed to reduce mortality by 20% but take a look at the error bars: The uncertainty means that the apparent differences are non-significant. That said, the UK study also found the highest (non-significant) mortality among the vegans and the lowest (also non-significant) mortality among the fish eaters.
The large uncertainties arise from the relatively small populations in these categories. Australia is famous for its meat-eating and barbies; strict vegetarians only make up 0.6% of the population, and this study is only identifying those that have died since 2006. Small numbers increase the probability that any variation is due to chance alone, leading to wide error bars. Presumably, there were too few vegans to tease out any relevant data on this sub-category.
Playing around with the confounders (also known as modelling) failed to reveal any significant differences between the vegetarian and regular meat diets whatever was left in or taken out. The absence of a benefit is all the more remarkable as the vegetarian groups were all associated with healthier lifestyle factors – lower alcohol consumption, smoking etc – than were the regular meat eaters. Which kind of implies that vegetarianism might be sufficiently unhealthy to negate the benefits of their healthy lifestyle choices, such as smoking and drinking less! But that can be no more than a hypothesis for now, given the differences were non-significant.
On the other hand, the fish diet, did reach significance in some of the modelling scenarios if not in the final fully-adjusted analysis, leading the authors to say this is perhaps not unexpected, pointing to a recent meta-analysis (Zheng et al., 2012) which concluded “The dose–response analysis indicated that every 15 g/d increment of fish intake decreased the risk of CHD mortality by 6 %”
Despite having demonstrated the null hypothesis, we can draw a few conclusions from this paper in relation to all-cause mortality:

The authors point out that earlier studies which reported a benefit on all-cause mortality from vegetarian diets had a number of potential weaknesses: Some were based on very specialised populations where there were many other factors at play (Seventh-day Adventists). Such populations do not reflect vegetarianism among the general population. Another problem is that vegetarianism is associated with a large number of healthy lifestyle choices which confound the analysis. They also point out that vegetarian diets vary considerably between study populations, and in some cases, apparent benefits might be attributable to an increase in fruit and vegetable consumption, for example, rather than a reduction in meat eating. They also suggest that vegetarian diets may have become less healthy in recent years with an increase in sugar, soy products and refined carbs.
So if you have been worried in the past about the meat vs vegetarian thing, just keep calm and… 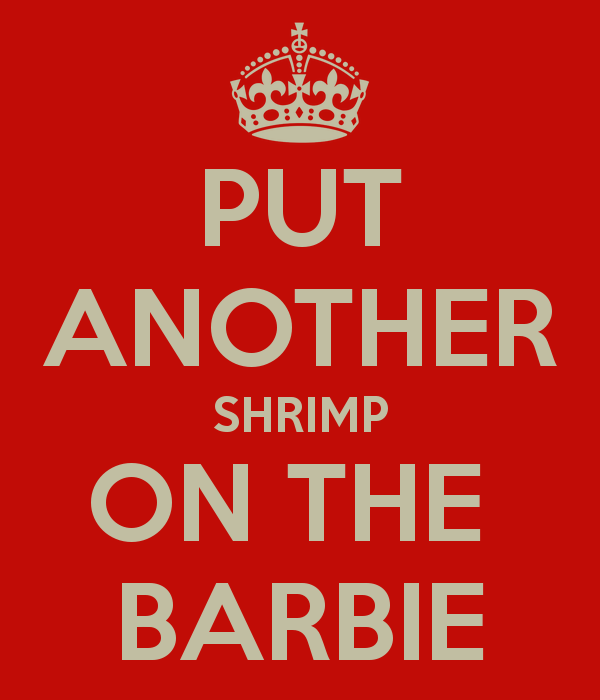 For comparison, here are the Aussie and UK findings side by side: 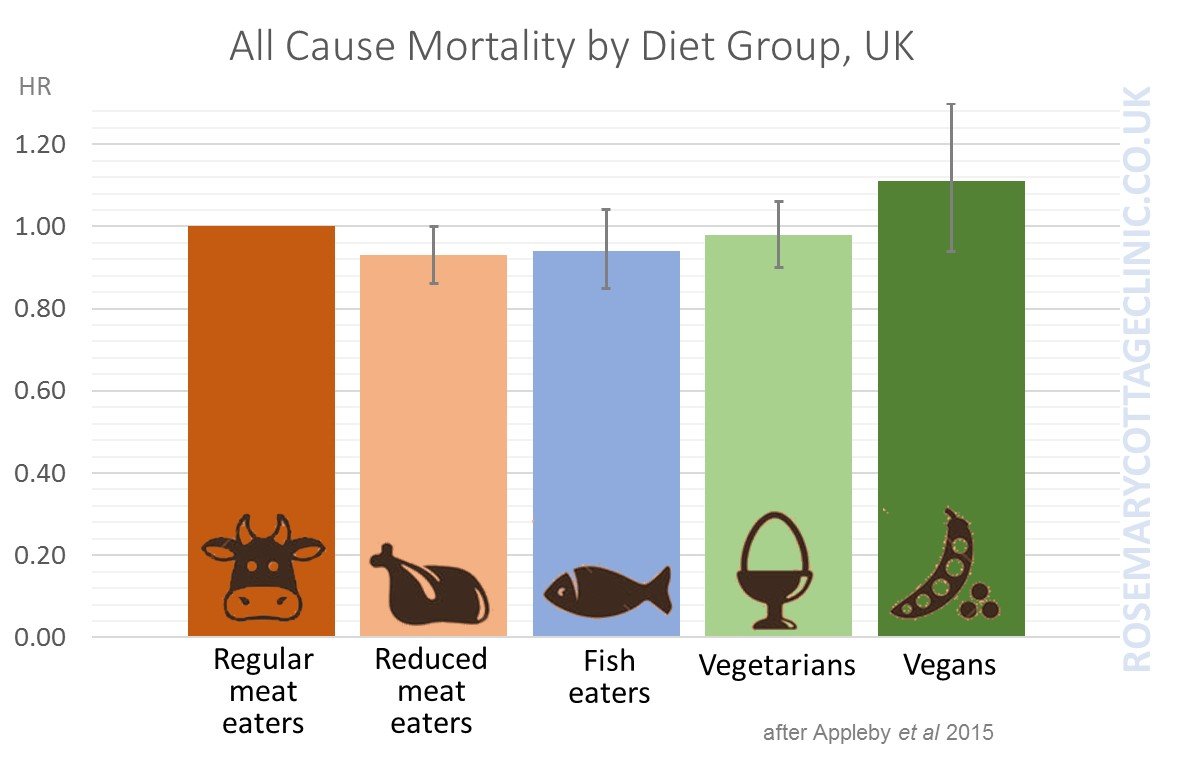