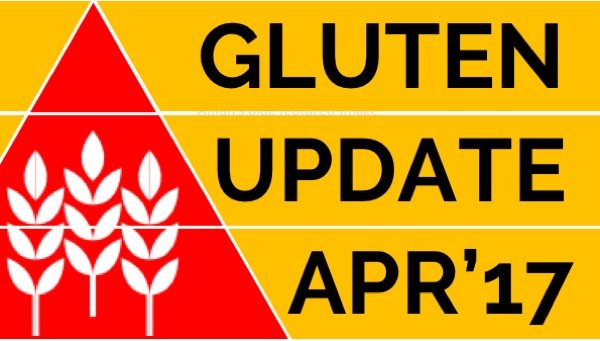 Dietary gluten causes severe disorders like celiac disease in gluten-intolerant humans. However, currently understanding of its impact in tolerant individuals is limited.

A ground breaking study has undertaken the first detailed investigation into the effects of gluten on metabolism and microbiome in gluten tolerant mice. The purpose of the study was to identify the effects of an obesogenic diet with or without gliadin (a key, immunogenic component of gluten).
The team from The National Food Institute, Denmark (Li Zhang et al, 2017) analysed a huge array of parameters, including insulin resistance, histology of liver and adipose tissue, intestinal microbiota in three gut compartments, gut barrier function, gene expression, urinary metabolites and immune profiles in intestinal, lymphoid, liver and adipose tissues.
Using tightly controlled diets the researchers found that a relatively small change (exchanging casein for 4% gliadin) resulted in a considerable impact on the host response in the mouse model. The levels of gliadin used were comparable to that found in bread. The remainder of the diet was, however, higher in fat than a typical human meal (35g fat/100g).
The headline findings include:

The changes were predominately negative, but there is a huge amount of detail to unpack in this research, cetainly more than I want to go into in this post. That said, I will look a little more into the changes to the microbiome as they are particularly fascinating. If you are interested in going into the other areas more deeply then check out the full free text.
Changes to the intestinal microbiome
After nine weeks on the 4% gliadin diet levels of lactobacillus had fallen by more than 90%. (These are generally considered beneficial bacteria). Conversely, bacteria associated with detrimental health changes including Clostridium XI, Dorea and Coriobacteriaceae increased in abundance by more than ten fold.

Strains belonging to Clostridium XI, including also the opportunistic pathogen C. difficile, are associated with compromised health. Dorea spp. are found to be overrepresented in irritable bowel syndrome patients, and patients with non-alcoholic fatty liver disease. Coriobacteriaceae spp. have repeatedly been shown to be involved in host lipid metabolism, and many bacteria within this group are considered as opportunistic pathogens

One apparently positive change observed in the gliadin consuming mice was an increase in Akkermansia in the colon. This species is usually associated with beneficial effects on metabolic health and inflammation. However, it feeds primarily on mucin secreted from the gut wall, and the researchers suggest its proliferation may be due to increased turnover of the small intestine mucosa due to disrupted gut barrier function.
Another recent paper (The gut–kidney axis in IgA nephropathy: role of microbiota and diet on genetic predisposition, Coppo, April 2017) underscores the importance of gluten-microbiome interaction, in this case to the development of IgA nephropathy (Berger’s disease).
The importance of this research is that it is a major piece of work exploring the effects of gluten relevant to the ‘normal’, apparently gluten-tolerant population. It has shown a large range of measurable effects which will need to be investigated further, particularly to establish their relevance in humans. In terms of the gluten iceberg these researchers are undertaking the deep sea diving necessary to establish the extent of the sub surface portion of the gluten phenomena. I am sure we will see more research like this in the coming years.

The first-degree relatives (FDRs) of patients with coeliac disease are the main risk group for disease development.

Parents, children or siblings of coeliacs should therefore have blood tests regularly, and if positive should immediately adopt a gluten free diet. A study by Nicola Imperatore et al, which I cover later in this post, has demonstrated the importance of early adoption of a gluten-free diet for anyone with positive coeliac blood tests, even when they have no  symptoms, to avoid progression of intestinal damage and immunological problems.
Some patients, however, claim that they have been screened for coeliac disease and have been told ‘they don’t have it’ – i.e. that their blood markers were negative. In many cases, however, I can tell from their symptoms that they are gluten sensitive despite the test results. Many go on to make remarkable progress once they adopt a properly gluten-free diet, but sometimes it can be an uphill struggle convincing them to give it a try. Such is the power of the medical establishment when it makes its decrees.
These clinical observations have recently received confirmation from a study published in the Journal of Gastroenterology and Hepatology (Vaquero et al, 2017), which investigated the value of a gluten free diet in first degree relatives who were negative for coeliac blood markers (anti-endomysial antibodies and raised anti-tissue transglutaminase ). In this study they invited 205 first degree relatives of known Coeliacs who were negative on blood tests to undergo genetic screening (for the HLA-DQ2/8 genes) and duodenal biopsy to check for intestinal damage. Symptoms were established by questionnaire at the start of the study, after which participants followed a three phase diet: (1) baseline diet (gluten containing) (2) gluten free diet (4 weeks) then (3) gluten ‘overload’ diet
Of 139 who completed the study HLA-DQ2/8 was positive in 78.4% of the participants (homozygous, 15.1%; heterozygous, 63.3%). Alterations to the intestinal mucosa were noted in 37.1% of participants who underwent duodenal biopsy (Marsh I, 32.7%; Marsh IIIa, 4.4%). At baseline more than half of the participants had gastrointestinal symptoms (57.6%), mainly associated with bloating (16.5%), constipation (15.1%), diarrhea (14.4%), and abdominal pain (5.8%). During the gluten-free phase this fell to just one quarter and increased agin during the gluten overload phase.
Symptom improvement during the gluten free diet was twice as common among women as men and three times as common among people with an existing autoimmune disorder. Both of these observations fit clinical patterns at Rosemary Cottage Clinic and are similar to risk factors identified in studies of Non Coeliac Gluten Sensitivity.
In conclusion: First degree relatives of coeliacs have a heightened risk of developing coeliac disease. Of those without coeliac blood markers many have intestinal damage. In addition gluten related symptoms are commonly present independent of intestinal damage. Such people would have to be classified as Non Coeliac Gluten Sensitive as they do not fit the definition of Coeliac.
Non Coeliac Gluten Sensistivity persists even after 8 years of a wheat-free diet
In a paper recently published in Gastroenterology (Carroccio et al, 2017) Italian researchers followed up 200 patients that had been diagnosed with NCGS many years earlier. 88% had experienced improved symptoms following their original diagnosis.
8 years later 148 of these individuals were still on a strict wheat-free diet, with virtually all of them (98%) reporting a continuation of symptom reduction. Among those that had not maintained a strict WFD only 58% had symptoms that were improved compared to the time of diagnosis.
The researchers repeated the double-blind placebo-controlled challenge with 22 patients, and found that 20 reacted to wheat.
This study demonstrates that NCGS is persistent, suggesting that it should be treated as a life long condition and a wheat-free diet adhered to.

A gluten-free diet prevents progression in Potential Coeliac Disease even when asymptomatic
Coeliac disease is diagnosed where patients have positive  blood tests (Anti-endomysial antibodies and raised anti-tissue transglutaminase) as well as evidence of villous atrophy on duodenal biopsy. In some cases, however, blood tests are positive, but there is little or no intestinal damage. Such situations are labelled Potential Coeliac Disease (PCD).
Until now it has not been clear whether such patients simply have a mild form of gluten intolerance, or whether they have early stages of Coeliac disease.  Furthermore, for the subset of PCD patients that have no gastrointestinal symptoms.
To answer these questions recent study an Italian team (Nicola Imperatore et al, Mar 2017) followed patients with PCD either on a gluten free diet or a gluten containing diet for a period of six years.
In short, those on the the gluten containing diet had increased intestinal damage and immune related disorders compared to those on the gluten-free diet. In addition, the asymptomatic patients who continued to consume gluten 69% developed coeliac-related symptoms, 46% developed villous atrophy and 61% immune mediated disorders.
This study underlines the importance of starting a gluten free diet as soon as possible following positive blood tests, regardless of symptoms and presence of villous atrophy.
Routine screening for Coeliac blood markers is not currently undertaken as many people that such tests would identify would prove to have no symptoms nor villous atrophy. It has been assumed that there would be no point in starting them on a gluten free diet as it was assumed that they would not go on to develop coeliac disease. This study challenges this position and demonstrates that many of these ‘false positives’ would indeed benefit from starting a gluten-free diet because they are at risk of developing villous atrophy and autoimmune diseases in the long term..
Coeliac Disease may be triggered by a common virus
It has long been known that the risk of coeliac disease is increased after various infections such as campylobacter, rotavirus and gastroenteritis. One hypothesis is that the presence
of both the pathogen and gluten presented simultaneously to the immune system  is enough to trigger coeliac disease.
Now a team from the University of Chicago, has found that exposing mice to a common reovirus called T1L can induce gluten intolerance. This virus was first identified in humans in the 1950s but has not been associated with any disease.
The team found that when they fed gluten to mice, those that were also infected with the virus produced two to three times as many antibodies to gluten as those that were virus free.

One of the Authors of the study Bana Jabri explained “Instead of mounting a tolerant, non-aggressive response, the immune system in the presence of the reovirus views gluten as being dangerous, promoting a destructive inflammatory response,”
The discovery has led the authors to speculate that a vaccine might be possible to prevent people from developing coeliac disease. Personally I think that’s unlikely, for a number of reasons. 1) gluten seems to cause disease by many pathways not just an aggressive immune response, 2) the researchers did not show that the mice went on to develop coeliac disease they just had a heightened immune response to gluten, 3) there is no evidence that all coeliacs had previously been infected with reovirus, and 4) physiological stressors other than pathogens appear to be able to trigger coeliac disease.
Source: New Scientist, Gluten allergy in coeliac disease may be provoked by virus (04/06/2017)

Coeliac Disease and Joint/Bone problems
In a recent letter to the journal Joint Bone Spine, Coline Daron et al report on their analysis finding 20‐30% cumulative incidence of arthralgia and arthritis among coeliac patients. They also identified an increased risk of osteoporosis:

The authors call for physicians to undertake coeliac screening in cases of osteoporosis, arthralgia and arthritis where no obvious cause can be identified.