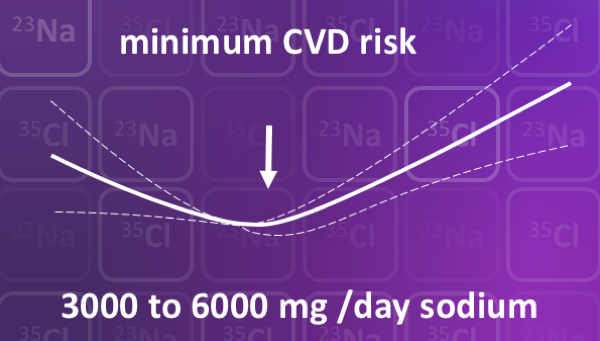 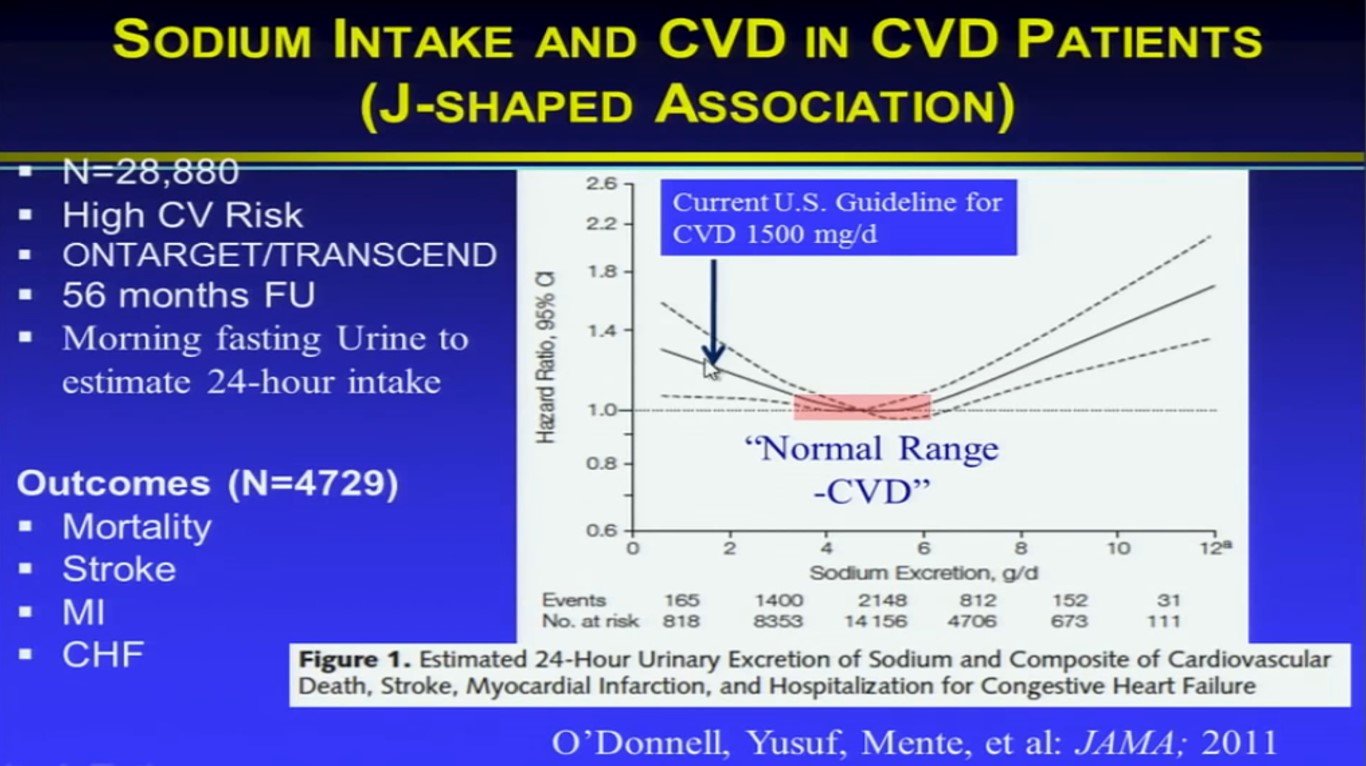 The recent video we posted of Dr SalimYusuf’s PURE study had a section on sodium intake, where he showed that the lowest risk of cardiovascular events, cardiovascular deaths and all-cause mortality was associated with an intake between 3000 and 6000 mg of sodium per day (equivalent to 7 to 15g salt per day). The current US average sodium intake is 3800 mg placing the general population nicely within this sweet spot, although towards the lower end.
Current US and UK dietary recommendations recommend an upper limit at 2300mg of sodium (6g of salt) whilst cardiovascular recommendations by bodies such as the American Heart Association aim to reduce sodium intake to 1500 mg per day (approx 3.75 g salt). If the PURE study is right (and it is not alone in questioning the current guidelines), then these aspirations would do more harm than good.
How did such discrepancy arise? The problem may be the use of surrogate markers. The thinking goes like this: Salt raises blood pressure. Raised blood pressure increases CVD risk, so salt increases CVD risk. This kind of thinking was evident in 2011 when the American Heart Association (AHA) called for salt targets to be reduced to 1500mg per day.At the time MedPage Today explained:

The evidence linking salt intake with blood pressure — and the major adverse outcomes of heart disease, stroke, and kidney disease — is “impressive,”…
That evidence includes more than 50 trials assessing the blood pressure effects of salt, as well as a meta-analysis showing that cutting salt intake by about 1,800 mg per day lowered blood pressure by 5 mm Hg systolic and 2.7 mm Hg diastolic.
This is a “critically important public health issue,” according to Appel and colleagues, and this AHA advisory must be considered “a call to action.”

On the basis of this ‘A leads to B leads to C, therefore A leads to C’ thinking initiatives were instigated all round the world to reduce public consumption of salt. A task force of concerned scientists even formed a lobby group to put pressure on food manufacturers, which successfully led to reductions in added salt in manufactured foods.
However, within a short time of the AHA call to action reports started coming in contradicting this advice.

Over this period it is clear that scientists were becoming more and more irritated with the dogmatic approach of the AHA and government bodies, and by the last article were publicly calling the AHA anti-scientific!
Despite all of the research questioning the validity of further salt reduction US and UK policy remains stubbornly wedded to the ‘less is best trajectory’. In their 2016 survey the UK government reported proudly that average sodium consumption fell from 3500mg in 2005 to 3200 mg in 2014.
Their report claimed “Too much salt in the diet can raise blood pressure which increases the risk of heart disease and stroke. A reduction in average salt intake from 8g to 6g per day is estimated to prevent over 8000 premature deaths each year and save the NHS over £570million annually.”
Yet contrary evidence from studies including PURE would suggest that this is not simply futile but probably harmful. You would think that with the swathe of research challenging the low salt dogma that public policy would be questioning the wisdom of further reductions. Not a bit of it. Dr Alison Tedstone, chief nutritionist at Public Health England, makes no bones about it:

Our analysis makes clear that there is a steady downward trend in salt consumption. While people are having less salt than 10 years ago, we are still eating a third more than we should.
Many manufacturers and retailers have significantly reduced the salt levels in everyday foods. However, more needs to be done, especially by restaurants, cafes and takeaways.

The intransigence of health policy makers leads researchers to exasperation and despair. As one writer put it:

In an interview with MedPage today researchers who found that patients with heart failure who ate more salt did better than those who ate less made the following statement which we have published before, but is such a gem it deserves another outing:

1 thought on “Salt and cardio-vascular disease: Policy and Science clash”