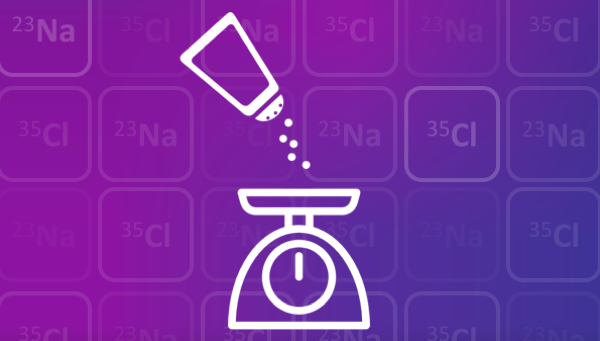 We made a boo-boo in our recent post (Cardiologist attacks diet dogma at 2017 symposium) where we summarised the findings from the PURE study regarding salt intake. We originally stated that 3 to 6 grams of salt per day appeared optimal but this should have read 3 to 6 grams of sodium per day.
What’s the difference?
Salt is a simple compound sodium chloride, NaCl, composed of sodium and chlorine atoms in a 1:1 ratio. Sodium has an atomic mass of 23 and chlorine a mass of 35, so the fraction by weight of sodium in salt is 23/58 = 40%; or said the other way round, 1 gram of sodium is found in 2.5g of salt. To make things even more confusing, sodium is often quoted in milligrams (mg) whilst salt is given in grams, so the conversion becomes: 1000mg sodium = 2.5g salt
Let’s put this to the test with a confusing pair of health policies: UK guidelines recommend you eat no more than 6g of salt per day, whereas US guidelines place the limit at 2,300 mg of sodium per day. How do these compare?
First, converting the US 2,300 mg of sodium to grams gives 2.3 g of sodium. Next, convert this to the equivalent amount of salt by multiplying by two and a half: 2.3g x 2.5 =  5.75g. This figure rounds to 6g. i.e. they are essentially recommending the same thing but expressing them in different ways. (That’s the special relationship for you!)
Here is a handy table for converting between sodium, salt and teaspoons:

*The PURE study found that the lowest risk of cardiovascular and all-cause mortality was associated with a sodium intake of 3000 to 6000 mg per day. A concern I will look at in the next post is that public health policy does not take into account the lower limit, and assumes that less salt is always better. PURE and other studies suggest otherwise!

This sodium/salt mistake crops up a little too often and leads to confusion. For example, MedPage Today, a respected medical news site, reported in 2011 that the American Heart Association had called for salt intake to be limited to 1,500 Mg. (I will write more about the conflict between this figure and the findings of the PURE study in my next post)
First off, I’m sure they meant milligrams (mg), not megagrams (Mg). Autocapitalising their title, put them out by a ‘trifling’ factor of one billion, but that’s forgivable. Where they really sowed confusion was by muddling up sodium and salt like I did. The AHA was calling for sodium intake to be reduced from 2300mg per day to 1500 mg per day (for adults), but MedPage reported these figures as salt, not sodium.
One bemused commenter wrote “This article suggests 1 1/2 gms of salt a day, in the UK we are told 6gms per day”
So to clarify, the UK and US recommended upper limit is 2300 mg sodium per day (= 6 g salt), and the AHA recommendation is 1500 mg sodium (=just under 4g of salt). In contrast, the PURE study found the ideal range was 3000 to 6000 mg sodium (=between 7.5 and 15g of salt per day).
Why then do researchers and nutrition labels quote sodium, not salt quantities? Because in principle at least, you could get sodium from sources other than sodium chloride. In practice non-salt sources of sodium are insignificant.
Anyway, hope that clears up the confusion about measuring sodium levels.
Next up I’ll tackle how the national guidelines are pushing us in the opposite direction to that suggested by the PURE study.