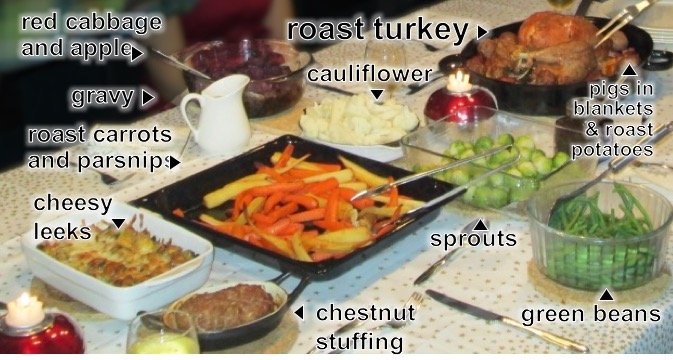 Here’s me attempting to carve the turkey at the family Christmas Dinner. This year I managed to get all the elements of this traditional feast just right – the Brussels sprouts were not soggy (which I picked from the garden an hour before cooking), the roast parsnips and carrots were not charred to cinders (like last year), and the braised red cabbage and apple had just the right amount of vinegar and cloves!

We had Turkey with all (at least most of) the trimmings shown in the image below.

As you can see I made ten accompaniments to the turkey. For the cheesy leek and celery dish I used a sheep’s cheese, only obtainable at Sainsbury’s called Parlick Fell, which is rather like a Wensleydale, but melts properly, the chestnut stuffing was mostly pork mince, some chestnut puree and herbs/seasoning. All the main vegetables were organic -some from our own garden.

I brine-soaked the 4.8kg organic turkey for 24 hours before a long slow roasting (4.5 hours at 140°C), done within an excellent new roasting tin that I will comment on below. Brining of turkey is advised by some old time chefs as well as my friend and food writer Rosemary Moon. Brining is soaking in cold salt water, with some additional herbs (thyme, bay leaves and black pepper in my case) and it ensures a moist result as the salt water is drawn into the meat, along with the herb flavours.

And, though I say it myself, the result was excellent, especially as turkey can be rather a dry meat.

The pigs in blankets and stuffing balls were cooked while the turkey was in the oven and added around the bird before serving. The potatoes, carrots and parsnips were parboiled and then roasted in goose fat at high heat after the turkey had been removed from the oven, covered with a towel and let to rest for 20 minutes, and the temperature was whacked up to 210 °C, which resulted in the perfect degree of ‘tan’ on everything.

The spuds were also arranged round the bird before serving to the family, along with the bacon wrapped half sausages (Waitrose’s ‘rosemary and herb’ organic chipolatas, which are grain free), whilst the carrots and parsnips were served in their own roasting dish. The gravy was simply the turkey juices from the roasting tin with a good dash of red wine.

And here is my plate: a wonderful meal indeed!
The new roasting tin is just a very large enamelled roaster, with a lid, but it is particularly well designed, so I want to show it to you here. I used it upside down, as you see, and it worked really well. The ‘lid’ keeps all the moisture in, but when removed leaves the turkey in the base which is deep enough to fit roast veg around, and is presentable enough to put on the table. Carving was easy in-situ.

I found this pan at Home Sense, an end of line/discount store near me. They had other large oval lidded roasting dishes, but this one was different due to four factors:

The previous day we had polished off a batch of my highly acclaimed grain-free mince pies with real mince meat (above left) but our main desert was of course a Christmas Pudding, but a grain-free Christmas pudding (above right) which was a total hit!

I also made two marvellous deserts which we had on Boxing Day: gluten-free cheesecakes (one for goat people and the other for cows i.e. those who prefer or can only tolerate goat’s milk dairy products, and those who prefer cow’s milk products).

The goat-based cheesecake (top) was a lemon zinger, whilst the cow dairy one (bottom) was chocolate. And yes, they taste as good as they look! I’ll post recipes for these another time.

I trust all my lovely readers, whether patients or strangers or friends, had a wonderful feast this Christmas, and are looking forward to a healthy and wise 2017. We will be posting a special News Roundup for the whole of this year, within the next week, so look out for that!

2 thoughts on “My Grain-Free Christmas Dinner”