Read time: 7 minutes (1400 words)
1. The WHI (Women’s Health Initiative) – low-fat diet and heart disease
In 1991 the US National Institutes of Health (NIH) initiated The Women’s Health Initiative (WHI). It was the largest intervention study ever undertaken, focusing on 160,000 postmenopausal women aged 50–79 years over 15 years. The study included three large-scale clinical trials and one observation study covering cardiovascular disease, cancer, and osteoporosis.
The Dietary Modification Eating Pattern is the trial we are interested in here, as it aimed to determine the effect of a low-fat eating pattern on coronary heart disease incidence. The question it was tasked with answering was “can a low-fat diet reduce heart disease?”
The diet group consisted of 19541 women who underwent intensive intervention consisting of:

The control group (29294) were given no advice and left to eat their habitual diets. The trial lasted eight years, meaning that this was a very large, long, expensive intervention. Trials like this only come along once in a lifetime. To ensure the participants stuck to the diet the ongoing support and monitoring were unusually thorough.
The study group achieved a reduction in fat intake of 10.7% in the first year, compared to the control group. By year 6 the difference had only dropped slightly to 8.2% so long-term compliance was good. They also increased
Yet for all the success of the study design, there was no significant reduction in coronary heart disease, stroke or cardiovascular disease events as the graph below shows: 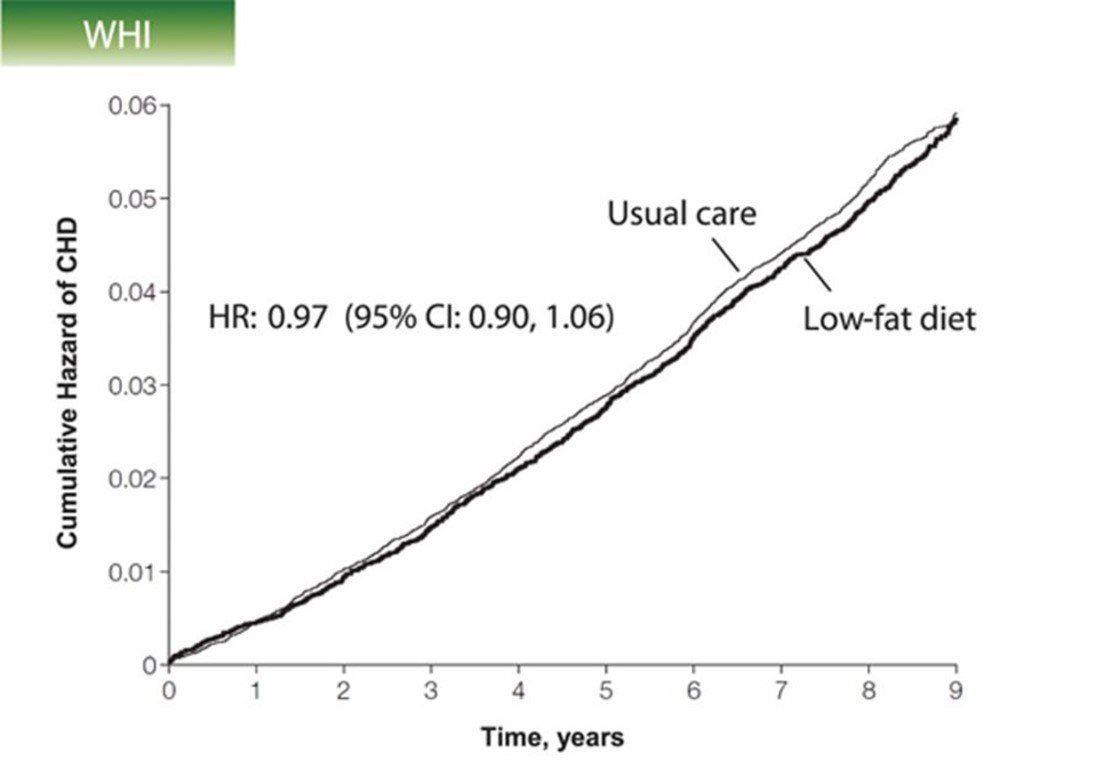 Along with the failure to affect heart disease, there was also no significant reduction in colorectal or breast cancer incidence which was secondary outcomes of the trial.
Despite all of these failures to affect disease progression, the intervention group did have significant improvements in biomarkers. This is an important point as biomarkers are usually treated as surrogates for disease risk. The logic is that if A causes B and B is associated with C then A causes C. You can see this in the following advice from the NHS:

Eat less Saturated fat… Eating a diet that is high in saturated fat can raise the level of cholesterol in the blood. Having high cholesterol increases the risk of heart disease. NHS Choices, Nov 2016

Saturated fat (A) raises cholesterol (B) and high cholesterol (B) is associated with increased risk of heart disease (C). Implying that saturated fat (A) causes heart disease (C). It’s a compelling argument. It seems so rational. But… it’s wrong.
The Women’s Health Initiative showed that this logic does not hold. The women on the low-fat diet did reduce saturated fat, they did have improved cholesterol, but damn them they had just as much heart disease as ever. What were they playing at? Didn’t anyone tell them what was supposed to happen?
The complete failure of a low-fat diet to modify disease progression should have been the nail in the coffin for low-fat diets. These results were published at the turn of the century, yet we are still waiting for government recommendations to catch up. Indeed, instead of relaxing the recommendations on dietary fat restrictions, the UK government in its latest revisions have doubled down on
Likewise, The World Health Organisation advocate a diet with less than 30% calories from fat overall. The NHS pages on fats states “Current UK government guidelines advise cutting down on all fats” Then goes on to explain how to eat a low-fat diet. They say “If you want to cut your risk of heart disease, it’s best to reduce your overall fat intake and swap saturated fats for unsaturated fats.” yet this is not what the highly expensive and extensive WHI study showed.
2. The PREDIMED trial (Prevención con Dieta Mediterránea) – an unrestricted Mediterranean diet with increased fat from olive oil or walnuts

The PREDIMED trial began in 2003. The 7447 participants were men (55 to 80 years of age) and women (60 to 80 years of age) with no cardiovascular disease at enrollment, who had either type 2 diabetes mellitus or at least three of the following major risk factors: smoking, hypertension, elevated low-density lipoprotein cholesterol levels, low high-density lipoprotein cholesterol levels, overweight or obesity, or a family history of premature coronary heart disease.
They were split into three groups: A control group who received the standard of care advice to eat a low-fat diet. The other two groups were advised to eat a Mediterranean dietary pattern: moderate consumption of ethanol (mostly from wine), low consumption of meat and meat products, and high consumption of vegetables, fruits, nuts, legumes, fish, and olive oil. These two groups were then provided with either extra-virgin olive oil or nuts (walnuts, hazelnuts and almonds) as regular, free food items.

Despite regular counselling to eat a Mediterranean dietary pattern the only significant differences with the control group (apart from a rather obvious increase in consumption of extra virgin olive oil and nuts), was a modest increase in fish and legume consumption amounting to approximately half a portion per week. The main difference in macronutrients was an average 4.5% increase in consumption of calories from fat mainly due to the olive oil and nuts. This additional fat would be primarily monounsaturated and polyunsaturated.
What is remarkable, when compared to the Women’s Health Initiative is the clear benefits of these high-fat foods. On average there were 30% fewer cases of heart disease or death among those eating the extra virgin olive oil or nuts. The graph below shows the distinct and increasing separation between the mortality lines of the control and intervention groups. 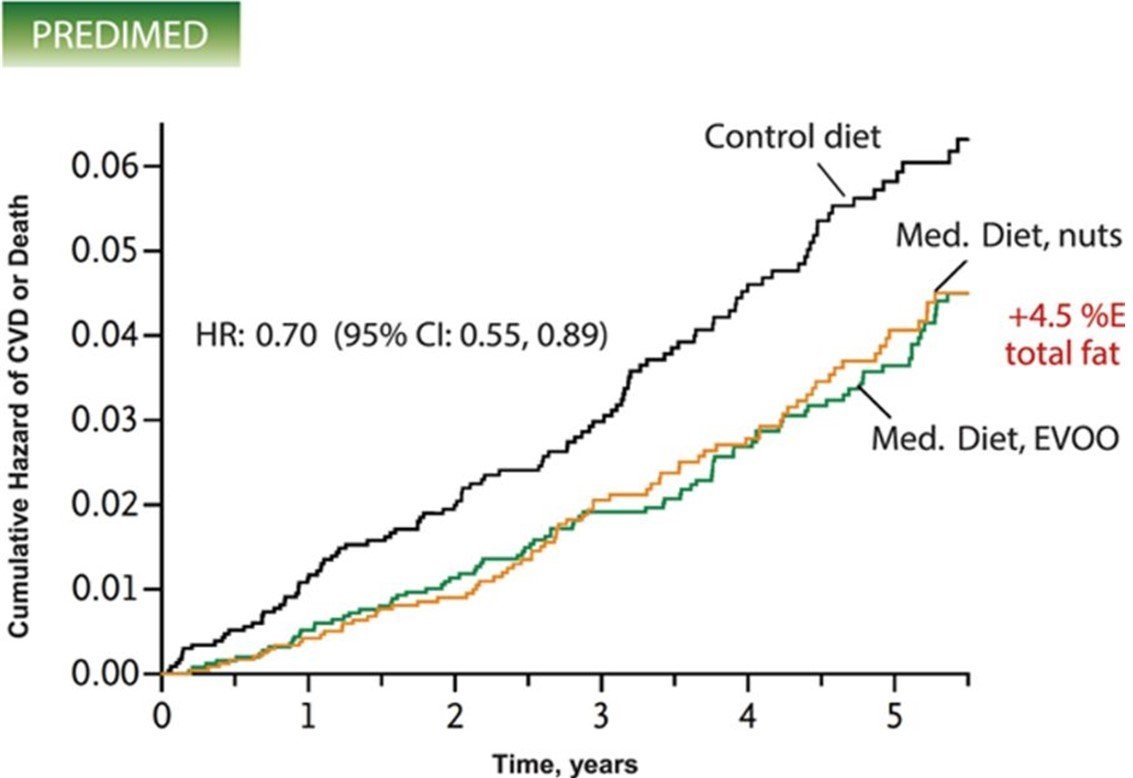 Considering the relatively modest dietary changes involved the size of the protective effect is quite remarkable.
Conclusions