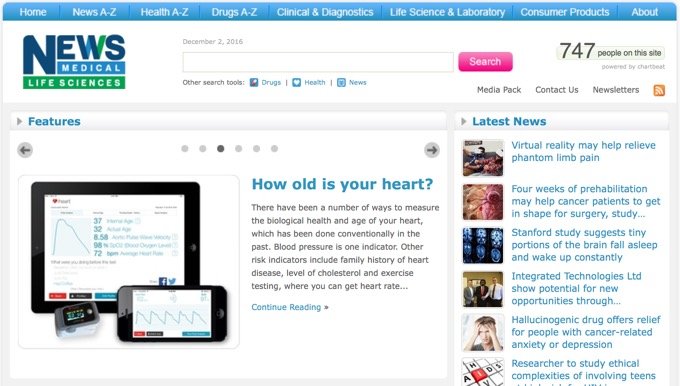 I recently came across this medical news website and I found it has a lot of well written articles but without the appaling spin that major newspapers seem to need to put on every story.

They cover all aspects of the health sciences but they have a comprehensive A-Z index allowing you to filter out just news on ‘nutrition’, ‘gluten’ or even specific conditions. One downside is that some of the stories are sponsored by commercial firms, but this is declared so you can make your own mind up.
Lets take a look at a few of the recent stories that caught my eye:

On that last article: I feel terribly sorry for people diagnosed with coeliac disease by their doctor as they are invariably directed to the ‘gluten-free’ alternatives in the ‘gluten-free’ aisle in supermarkets. The problem with this is these foods are often not only highly processed but are not free from gluten, even though the labels would have you believe otherwise. Many are made with grains from the same family as wheat (the Poacea or ‘grass’ family) none of which should truly be considered gluten free. It is not only wheat, barley and rye that contain gluten, indeed each of these has their own, species specific gluten (secalin in rye and hordein in barley). And oat gluten has its gluten, called avenin, corn/maize has its gluten, called zein and even rice has its form of gluten which is called  oryzeinin. I see patients who are sensitive to this whole family, so they have no chance at regaining their health if the information given is so inadequate, through the ignorance of their doctors and dieticians.

Some patients are even reactive to plants that have evolved similar proteins but are not in the grass family, such as buckwheat or amaranth. They simply cannot eat any of these products. And even those ‘foods’ that do not include any substances derived from the Poaceae family can be contaminated with gluten. There was a recall of so-called ‘gluten free’ foods recently due to contamination. And, to top it all, the law allows for one part per million of actual gluten to be in the so-called gluten-free ‘foods’ which is certainly enough to set off some people. So my advice is AVOID ANYTHING CLAIMING TO BE GLUTEN FREE. Instead eat things that do not have an ingredients list at all. Fish, meat, eggs, vegetables, nuts, fruit. These should have no labels at all. Then you know you are safe.