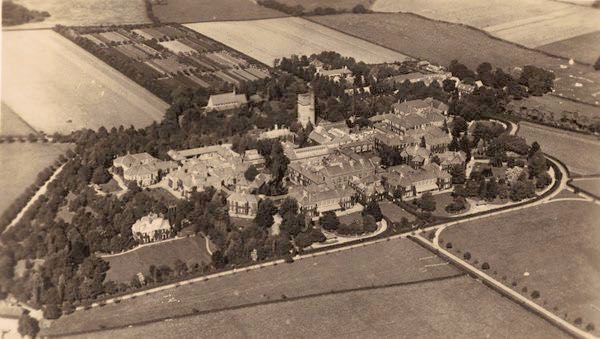 The first lecture today was about the remarkable and efficient use of the old West Sussex County Asylum, Graylingwell Hospital, situated to the north of Chichester, and the part it played in the First World War.

Graylingwell Hospital was originally constructed just to the North of Chichester in West Sussex in 1897 in classical Queen Ann style. Modelled on the English country house, it had a chapel, farm and acres of rolling gardens and countryside. With the advent of World War 1, it was converted from its role as the County Lunatic Asylum, and re-purposed as the primary war hospital for West Sussex.

Documenting this period in the Hospital’s history has been a long term project of our speaker Katherine Slay who was able to use her professional experience as an archivist at West Sussex Records Office to uncover many long-forgotten stories.

The building, she explained, had an excellent arrangement of space to afford maximum sunshine for the patients; beds were skillfully arranged in order to squeeze in up to 1400 wounded men at one time.

The swift conversion included building three operating theatres and an early X-ray facility that would prove invaluable in locating embedded shrapnel and bullets. The productive kitchen gardens and onsite farm provided much of the fresh food, whilst the grounds afforded plenty of opportunity for exercise and convalescence. I may be romanticising, but I think that if I had to stay in a hospital, I would much prefer one like Graylingwell with it’s rustic charms, rather than our modern impersonal factory-like affairs. Somehow I imagine that I would actually get better quicker: soul and spirit too. Anyway, I digress…

The capability of this nation’s civilians during the Great War never ceases to amaze me. It was a case of everyone willingly offering their intelligence, labour and ingenuity for the greater good, and much good was achieved. For example, we learned that in one 30 hour time period 400 men in various degrees of injury and misery arrived and were housed. Indeed over the four years of being a military hospital an incredible 29,000 men were admitted and cared for, including a good many from New Zealand, Australia, Canada and the USA. And only 142 deaths occurred during those dreadful years.

The logistical challenge of getting injured men from the front, in whatever state they were in (including louse infestations and malaria), transporting them from one station to another on the continent, then over to England and finally to li’l old Chichester, allocating them beds, nursing them, doing surgery on them, feeding them three times per day, making endless cups of sweet tea, providing sanitary facilities, and endless cigarettes as well as entertaining them and hopefully rehabilitating them either to go back to the front or not, depending on their condition, and burying those who lost their lives here, is a staggering feat of local effort and duty.

And doing surgery in that era involved a far greater attention wound cleaning, as there were no antibiotics on which to rely. Hundreds of operations were performed at Graylingwell and very few deaths occurred. They carried out over 160 skin grafts, 20 aneurysms (written up in the BMJ) and neurosurgery too, and many many cases of removal of foreign bodies, such as bullets, as well as the treating of bone and deep tissue infections. Many amputations had to be done, but always with a view to maximum preservation of limbs and digits.

I find it utterly amazing that, without antibiotics, super complex surgery was performed with the antisepsis aid of diluted chlorine bleach to sterilise wounds. Pain relief was limited to aspirin or morphine, and yet records reveal that there were no lives lost to these procedures. It proves that effective medicine need not be dependent on antibiotics or modern technologies. Indeed it may mean that greater skill and attention was required on the part of the surgeons of that era, when there are no antibiotics to rely on. If the job were not done terribly well they would know they had messed up very soon. They would have been less able to hide behind others, or the passing of time or discharge to a different ward or back home, if a bad job had been done and infection set in. The records would have shown it.


The resident Medical Superintendent of the asylum, Dr Harold Kidd, was retained for this new challenge and was given a new rank: Lieutenant-Colonel, and the title of Administrator. His name is still very much in evidence at the now much pared back psychiatric unit that still functions from Graylingwell’s Harold Kidd Unit. He retired in 1926 and sadly died three years later at the age of 64.

There were two female doctors in the team, one of whom, amazingly, comes into the second presentation, in Malta!

Thank you for a truly fascinating presentation Katherine Slay.

Lecture 2: The Nurse of the Mediterranean: Malta in WW1

The second lecture, by our friend Colonel David Vassallo DHMSO, MA, FRCSEd, L/RAMC, was on the extraordinary role played by the hospital islands of Malta in service to the British forces.
Over the past 5000 years of recorded history, the islands of Malta have served as a key stopping point in the Mediterranean sea. Indeed at one time or another it has been used by the Phonecians, the Byzantines, the Normans and the Knights of St John to Nelson, allies in the Crimean War as well as for the World War 1 theatres of Galipoli and Salonika. The deep harbour at Valetta –  the Grand Harbour no less – provided shelter for the largest vessels, whilst the facilities and hospitality of the islands served seafarers and soldiers of all stripes.

By the 20th century the infrastructure was such that Malta provided medical hospital services on a scale that was quite astonishing, especially when one considers the size of these islands. Some of these hospitals were vast, others small and with specific remits, but all tremendously effective and grand, as can be seen in the illustrations below.

Clearly, the Maltese people see themselves as giants and build accordingly. All of these buildings, as well as the prehistoric monuments, are HUGE. I wonder if this sense of stature springs from the tremendous Grand Harbour itself. The waters there and the natural security of the land enable the biggest ships on the sea today to dock there, and this must always have been the case, which has engendered the wholly positive effect in these islanders. Their big heart, big experience and big ability meant that during the terrible Galipolli campaign of April/May 1915 fully 4000 casualties arrived in Malta, on various ships, bringing the injured and sick to the army and navy hospitals that were ready willing and able to serve.

A similar situation, but with even greater numbers, occurred with the Salonika campaign. 150000 British troops were sent to Greece and the majority got malaria. 21,000 had to be evacuated to Malta’s 27 military hospitals between 1916 and 1919. Some hospital ships full of men were torpedoed and sunk.
With a population of just 211,000 in Malta, it is astonishing that they could manage 200,000 soldiers and 100,000 patients every week! As I said, they must have seen themselves as far larger than they were, and since ‘it’s all in the mind’ they managed to perform exactly as they saw themselves, i.e. as GREAT.

We now know that Dr Isobel Tate, one of the two female doctors who worked at Graylingwell Hospital plating out over 2000 bacteriology slides was also involved in the Serbian campaign and was in Malta with the famous neurosurgeon, Sir Charles Balance, and his team of specialists. Dr Tate is buried in Malta.

The Governor of Malta, Field Marshall Lord Methuen, made a very true statement in 1916:

Malta has been given a good opportunity for doing good, and she has faced the situation splendidly