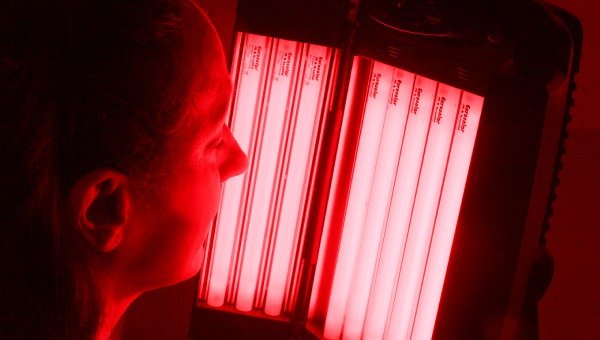 In this series of three posts Keir and I will be looking at the huge body of research that is uncovering the remarkable health benefits of red light. I have a red light phototherapy unit in my clinic (see photo above) but have only recently begun to realise how broad its applications are. As there is so much fascinating research to share I’ve decided to split it up into three posts to spare you all from long-post exhaustion!

Lets start with a quote from a researcher at the Centre for Vision Research, Upstate Medical University, New York:

Red light had been valued in the practice of medicine since antiquity. The utility of red light appears to be “re-discovered” at the end of the 18th century by Finsen who later became to be known as the “father of contemporary phototherapy” for his astonishing achievements of curing skin disorders such as small blisters using red light and lupus vulgaris using UV light. These successes won him the 1903 Nobel Prize in Medicine and Physiology “in recognition of his contribution to the treatment of diseases, especially lupus vulgaris, with concentrated light radiation, whereby he has opened a new avenue for medical science”.

– Ivayla I. Geneva, Photobiomodulation for the treatment of retinal diseases: a review (2016)

Humans evolved outdoors where they were exposed to regular and prolonged full spectrum sunlight. It is not surprising then that our physiology has adapted to make use of this light. The ability of the skin to synthesise Vitamin D is the best known of these interactions and relies on light from the ultraviolet part of the spectrum (UVB). However, there are many other roles that light plays apart from vitamin D production. The evolution of bare skin in humans suggests that sunlight played a vital role.

Because photons (particles of light) interact with molecules – a process known as photochemistry – so daylight is able to provide a source of information and energy at the cellular level. Light penetrates the skin just a few millimetres, so it’s chief effects are on the skin, eyes and scalp, but it can also affect the outer those layers of muscles and blood vessels that are close to the surface.

Effects triggered at the surface, however, can have deeper or systemic (whole body) effects. For example, the production of nitric oxide in the skin when it is exposed to sunlight has been shown to produce lower blood pressure systemically which persists for hours (see our previous post on Human Photosynthesis)

Research in the last twenty years has uncovered a vast array of biochemical actions and physiological effects that different wavelengths (colours) of light can have. Red light is the most studied visible wavelength and has a particularly fascinating range of properties.

The recent development of lasers, narrow band fluorescent tubes and more recently, light emitting diodes (LEDs) has enabled rapid research into the healing effects of individual wavelengths of light, especially red light, which this post will focus on.
Note: The particular source of red light – LEDs, lasers, fluorescent lamps – is immaterial in terms of the beneficial effects observed. The reference to one or another of these devices in the following studies can be ignored as it is the wavelength (colour) of the light, the duration of exposure and intensity that is important, not the source itself. Likewise, whether the light is pulsed or steady appears to have very little bearing so you can ignore those details.

Red light has been gaining popularity in beauty salons where they claim its regular use can stimulate collagen production and thereby lead to improved skin elasticity and reduced wrinkles. Over the last two decades, many experiments have confirmed these purported effects.

Red light penetrates the skin more deeply than shorter wavelengths such as blue, and UV light, easily reaching the lower dermal layers where the collagen matrix gives young skin its plump elastic quality. Incredibly, collagen makes up 70 to 80% of our skin. As we get older collagen becomes depleted and wrinkles start forming – the inevitable signs of ageing. Many topical skin products include collagen, in the somewhat futile hope that it will be absorbed by the skin and replenish its youthful qualities.

What we really need is for the body to produce its own collagen in-situ. Amazingly, this can be achieved with red light stimulation and for many people, the results are visible after a few weeks of regular treatment as can be seen in the photos below, whilst increased collagen levels have been confirmed in numerous studies.

Whilst the above results are quite impressive, some people only notice fairly subtle improvements. Studies typically find that 2 in 10 patients do not see any improvements at all, but some of these studies are short, involving only ten sessions [ref]

As well as red-light therapy, you can improve your skin by making sure you get enough collagen in your diet or from supplements. Dietary collagen has been shown to help protect the skin from ageing (ref). I would recommend making bone broth. Boiling down those leftover bones helps extract the collagen attached to them. Gelatine is also a good source, so check out my jelly recipes. Conversely, avoid high carb diets and vegetarianism which are associated with reduced collagen synthesis (ref).

Check out our post: 8 ways to boost your collagen

There is some evidence that red light can reduce the damage done by UVA. UVA is the main ultra-violet component of sunlight and UVA is used in sunbeds. UVA is considered to be the chief cause of photo-ageing, causing oxidative stress and directly damaging DNA in skin cells. Interestingly, in the lab, it has been shown that pre-treatment with red light ameliorates these effects.

One of the effects on skin cells of ultra-violet light is that the chromosomal end-caps called telomeres shorten. Cells can no longer reproduce once these telomeres become too short, so ageing is directly associated with telomere length (see pic below)

There is growing evidence that red light exposure prior to UVA reduces telomere shortening, and hence reduces skin photo-ageing [ref]

In one recent study, human skin cells were grown for five days, exposing them each day to no light (control), UVA or UVA + red light. The graph opposite shows the changes in telomere length. With UVA alone the telomere length decreased by 40%, but with red light the photo-ageing effect was significantly reduced. In the words of the authors:

The red light intervention tremendously attenuated the cytotoxicity of UVA

What is notable is that this protective effect was induced with a relatively low level of red light – approximately one tenth that of the UVA. Perhaps as a consequence of research like this some tanning salons now use a mix of UVA and red light tubes in their sun beds. Even so, I don’t recommend UVA sunbeds as they still lead to photo-ageing without the significant benefits associated with full spectrum light. The regular use of red light alone, on the other hand, would help protect one from daily sun damage.

There are indications that red light will not only slow, but reverse photo-ageing of the skin. In one test, 93 human subjects with a wide range of skin types were treated with pulsed red LED light. “Results showed improvement of signs of photo-ageing in 90%. The majority of patients demonstrated improvement in peri-ocular wrinkles, reduction in Fitzpatrick photo-ageing classification, global skin texture and background erythema, and pigmentation” [ref, full text pdf]

Some studies show that preconditioning skin with red or infra-red light makes it more resistant to subsequent UV exposure. Daniel Baroleta, of the Department of Medicine, Dermatology Division, McGill University, Montreal suggests “This is understandable from an evolutionary standpoint since exposure to these early morning red and infra-red wavelengths in sunlight may ready the skin for the coming mid-day deleterious ultra violet radiation.” [ref]

All of this research confirms and extends the benefits claimed by beauty therapies that employ red light for collagen production and wrinkle reduction. The indication is that getting more red light on the skin would be beneficial for all of us, especially those of us who spend too much time indoors!

Coming up: even more reasons to love red light!