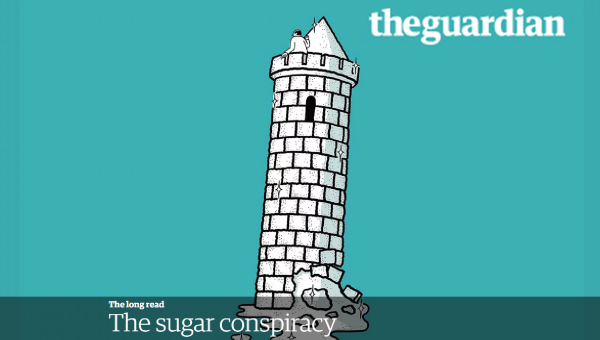 The Guardian’s ‘The Long Read’ this week has an excellent, in-depth article about how the dangers of sugar were ignored for decades due to the misplaced focus on saturated fat. The author digs deep into the workings of the nutrition orthodoxy and shows how it could get it so wrong for so long. HIGHLY RECOMMENDED.

In 1972, a British scientist sounded the alarm that sugar – and not fat – was the greatest danger to our health. But his findings were ridiculed and his reputation ruined. How did the world’s top nutrition scientists get it so wrong for so long?

Robert Lustig is a paediatric endocrinologist at the University of California who specialises in the treatment of childhood obesity. A 90-minute talk he gave in 2009, titled Sugar: The Bitter Truth, has now been viewed more than six million times on YouTube. In it, Lustig argues forcefully that fructose, a form of sugar ubiquitous in modern diets, is a “poison” culpable for America’s obesity epidemic.

A year or so before the video was posted, Lustig gave a similar talk to a conference of biochemists in Adelaide, Australia. Afterwards, a scientist in the audience approached him. Surely, the man said, you’ve read Yudkin. Lustig shook his head. John Yudkin, said the scientist, was a British professor of nutrition who had sounded the alarm on sugar back in 1972, in a book called Pure, White, and Deadly.

“If only a small fraction of what we know about the effects of sugar were to be revealed in relation to any other material used as a food additive,” wrote Yudkin, “that material would promptly be banned.” The book did well, but Yudkin paid a high price for it. Prominent nutritionists combined with the food industry to destroy his reputation, and his career never recovered. He died, in 1995, a disappointed, largely forgotten man.