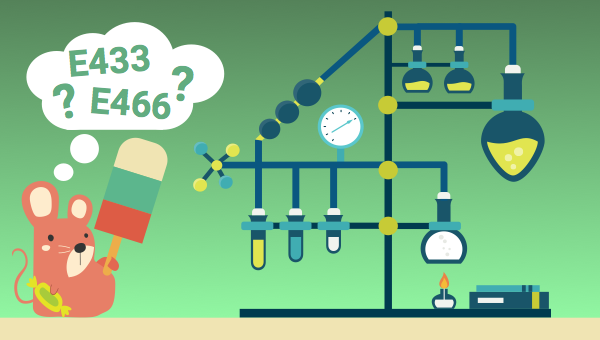 Emulsifiers used in processed foods from ice cream to baked products have been implicated in obesity. Earlier research in mice has now been extended using a model human gut, paving the way for human trials. Read on for the implications:

The relationship between processed foods, obesity and diabetes has not gone unnoticed. Societies that stick to traditional, unprocessed foods have lower levels of these diseases than countries that consume more industrial products.

The industrialisation of the food chain has increased the use of artificial additives including sweeteners, emulsifiers and preservatives. Many of these additives are hidden behind an inscrutable e-number. I remember throughout the 80s and 90s how ‘health nuts’, as their detractors labelled them, were criticised for their ‘uninformed’ avoidance of ‘E-numbers’. Yet the evidence is slowly accumulating that some of these additives may, in fact, be contributing to the obesity epidemic.

The key factor informing this research is the recently discovered microbiome – the community of bacteria that live in the gut. The microbiome is increasingly seen as an essential and long-overlooked human organ. One example of recently discovered interactions between food additives and the microbiome was published in Nature in 2014. The paper’s title speaks for itself: ‘Artificial sweeteners induce glucose intolerance by altering the gut microbiota.‘

How relevant this is to human health remains to be seen. Whilst the study authors claimed the concentrations fed to the mice was “relatively low”, other researchers challenged the findings pointing out that the levels were hundreds of times higher than people typically consume.

Undaunted, Chassaing’s team has conducted a further study in which a model human digestive tract was used (I imagine that it looked something like the diagram at the top of this post!)

The two emulsifiers were added to a series of flasks that simulate the conditions of the digestive tract. The researchers observed raised levels of flagellin – a protein produced by bacteria with flagella (whip-like tails). Flagellin is known to cause inflammation in the gut via toll-like receptor 5 (TLR5). TLR5 is expressed on the basal surface of gut cells and forms part of the immune surveillance responding to gut content – specifically flagellin. Their presence on gut cells keeps bacteria with flagella in check, especially if they begin to breach the gut wall.

These receptors have previously been shown to be involved in microbiome-related obesity. In a paper published in Science in 2010 researchers found mice that lacked TLR5 were more prone to obesity, and that changes to the microbiome were responsible for this. Indeed when this microbiome was transferred into mice with intact TLR5 they too became hyperphagic – eating more and becoming obese which implies that once the microbiome is thus deranged even intact TLR5 are unable to restore normal control of flagellates. Even when calories were restricted to prevent obesity these mice became insulin resistant.

It would appear that these emulsifiers are able to reduce the effectiveness of TLR5 surveillance allowing pro-inflammatory bacteria to proliferate and contribute to obesity.

“The gut pumps out six to 10 grams of antibodies a day directed against bacteria.”

These IgA antibodies attach to the flagella acting as a glue and preventing these bacteria swimming through the protective mucus layer that lines the gut. If TLR5 is knocked out these antibodies are not produced and bacteria can swim right up to the cells that line the gut, where they initiate inflammation. Synthetic emulsifiers appear to be hampering this natural defence system.

The next stage is human trials and Chassaing is in the process of enrolling patients. Whilst I don’t fancy being a volunteer myself, I am looking forward to the results. Whatever the outcome, artificial emulsifiers are a non-essential part of the diet and are easy to avoid if you stick to pure or real foods. As we so often see, the health of the gut depends on a healthy mucosa and healthy microbial balance.

To ensure your microbiota is as healthy as possible:

Part 2: where this becomes a multi-tailed tale!

In looking for information on flagellated intestinal bacteria I came across the species above Proteus mirabilis. Although it is a normal denizen of the human gut, it is very good at colonising surfaces outside the body, using those spaghetti-like flagella to swarm across solid surfaces. During its swarming phase, groups of these bacteria come together to make rafts which swim along surfaces using the combined force of their flagella.

P. mirabilis has contaminated most hospitals and their workers, colonising skin and surfaces, and has become resistant to many antimicrobials. It is the prime cause of catheter-associated urinary tract infections (CAUTIs), which is now the most common hospital-acquired infection worldwide. Alarmingly it has become resistant to many antimicrobials and several antibiotics.

So does P. mirabilis do its mass swarming trick in the gut? Not usually, presumably because of those gut released antibodies that stop flagella working. However, research in 2010 from Harvard School of Public Health found that it plays a pivotal role in inflammatory bowel disease (IBD) – which includes ulcerative colitis (UC)and Crohn’s disease (CD).

In short, researchers identified two factors that took place together. (1) dysbiosis – disruptions of the entire microbial community and (2) Proliferation of P. mirabilis and Klebsiella pneumoniae a non-swimming bacteria.

This is interesting, demonstrating the role of flagellated bacteria in a disease, but does this link back to the TLR5 and flagellin story we started with? Oh yes it does!

Bringing us full circle: a paper in PlosOne (Dec 2015) found that Crohn’s disease risk was increased in people with a TLR5 genetic polymorphism, whilst another paper found polymorphisms in TLR5 genes were significantly associated with the UC. Indeed the link between flagellated bacteria and IBD has recently led to the development of a colitis vaccine (March 2016) which boosts antibodies against the flagellin proteins.

Perhaps the most famous gut pathogen is the one associated with stomach ulcers, Helicobacter pylori. It too is flagellated but evades detection by TLR5 as it has evolved a different protein sequence on its flagellum such that it does not trigger a TLR5 innate immune response.

To wrap up this romp through flagellated gut microbes I’d like to pull together several related threads. When H pylori were first accepted as the ’cause’ of stomach ulcers in the 1990’s the treatment of choice immediately became antibiotics. The mentality was H pylori is the baddy, so kill it.

Since then our understanding of gut pathogens has become more sophisticated. Many pathogens are now recognised as ubiquitous, inhabiting the gut of healthy people in a benign, or even beneficial way. The rest of the microbiome, along with our immune system, holds them in check, and even makes use of them. As we saw with the Harvard IBD paper pathology requires disequilibrium in the wider microbiome before these bacteria turn nasty and cause disease.

The final part of the puzzle is the environmental stimuli – diet, stress etc – that lead to dis-regulation of the microbiome in the first place. Diet is a big part of this, including the role of additives in processed foods. The use of antibiotics is an even bigger concern, which along with caesarean births may be changing the microbiome irreversibly. As we have seen in this post, conventional treatments such as hospital disinfectants, antibiotics, and colitis vaccine are all dealing with the wrong end of the problem – the effects.

What is worse is that those interventions may actually be major drivers of dysbiosis in the population. We need much more focus on dealing with the causes: Reducing antibiotic use, improving diets and reducing additives and processed foods; At the start of life, avoiding unnecessary cesarean births and encouraging breastfeeding are obvious requirements. If we can get these things right the discovery of the microbiome will prove to be the biggest breakthrough in the history of medicine.

The Microbiome on BBC Radio 4