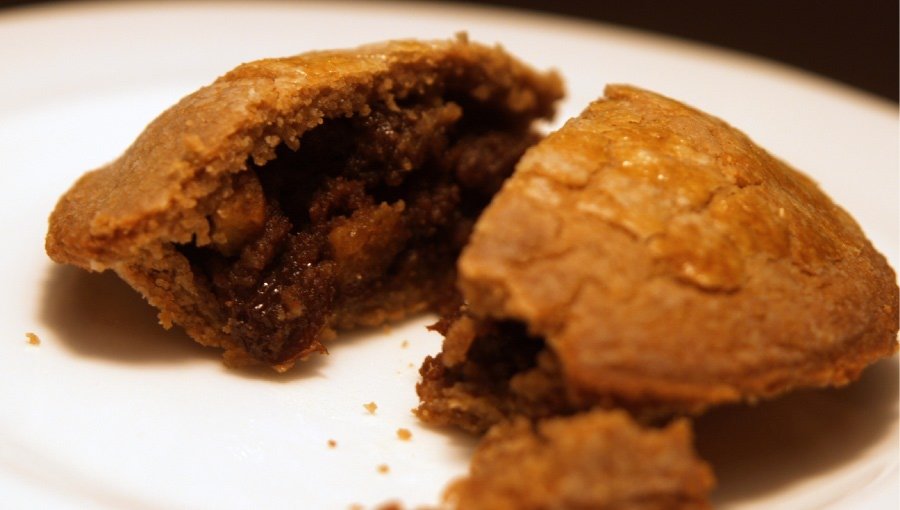 “Thence straight home being very cold, but yet well, I thank God, and at home found my wife making mince pies.”

The mince pies of Pepys’ day, of course, contained minced meat – the real McCoy – that’s why they were called mince meat pies. The minced meat – mutton or beef – was combined with the familiar fruit, spices, peel and alcohol to make a pie far more nutritious, hearty and eat-worthy than the modern sickly-sweet carb-bomb.

If you want to read more on the history of how meaty mince pies turned into the super sweet modern variety the Independent article “Sweet delight: A brief history of the mince pie” is well worth a read.

The author details several failed attempts to replicate traditional mince pies using minced beef, stating “We all agreed they were somewhat odd and struck a curious chord.” He persisted – or more accurately his wife did – and her final attempt based on Mrs Beeton’s 1861 recipe succeeded: “the result was distinguished by a fine depth of flavour with quite a bit of savouriness on the palate. Not too sweet, it was a grown-up mince pie.”

The recipe I have devised falls in that category – it is totally delicious! This recipe is not very low-carb, but it is gluten/grain free, being based on almond and chestnut flour. After a couple of attempts I managed to get a pastry that melts in the mouth like best all-butter shortbread. OK, it’s a bit crumbly to hold, but eaten off a plate with lashings of cream… 🙂

These will be a real talking point over the festive season, and despite their unfamiliarity your guests will be pleasantly surprised at how easily they go down!

For once, a mince pie that is real food, and genuinely worth eating.

Peel, core and chop the apples into chunks. Place them along with the minced beef in a food processor and blitz until creamed together. If, like mine, your food processor is a bit feeble, add the beef a bit at a time.

Place the whizzed mix in a pan with all the remaining ingredients and simmer for three hours with a lid on, stirring occasionally.

Once cooled the mincemeat will keep in the the fridge for five days, but it’s better to get on and make your pies right away. (If you are experienced with canning or bottling it is possible to bottle it in sterile jars with sterile air tight lids and it will keep indefinitely, but only attempt this if you read up on the method and pitfalls which I don’t have time to go into here)

As you can see, the finished mince-meat has a finely ground base-texture with no lumps of meat. 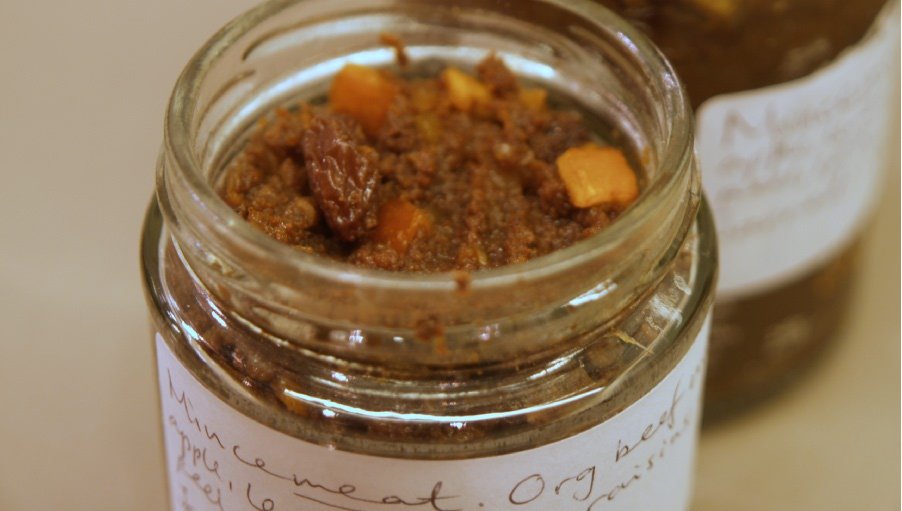 Sieve the chestnut flour into the ground almonds in a large mixing bowl. Add the sugar if you are using it (though it really isn’t necessary) and combine evenly with the dry ingredients. Add the ghee/butter and chop into bits then, with cold hands rub in the butter/ghee bits to the flours until it is evenly incorporated and ‘looks like fine breadcrumbs’ (as they always say in recipe books). Add almost all the beaten egg and bring the pastry together in a ball with a butter knife or fingertips. Cool in the fridge for 15 minutes.

Taking portions of this pastry roll it out on a pastry board well sprinkled with tapioca flour. This is a pure grain-free starch (from a tuber) and is very fine. Roll out the pastry to a size appropriate for at least two pastry cutter rings to fit. If using a typical set of three rings, use the largest and middle sized rings for the base and the lid respectively. 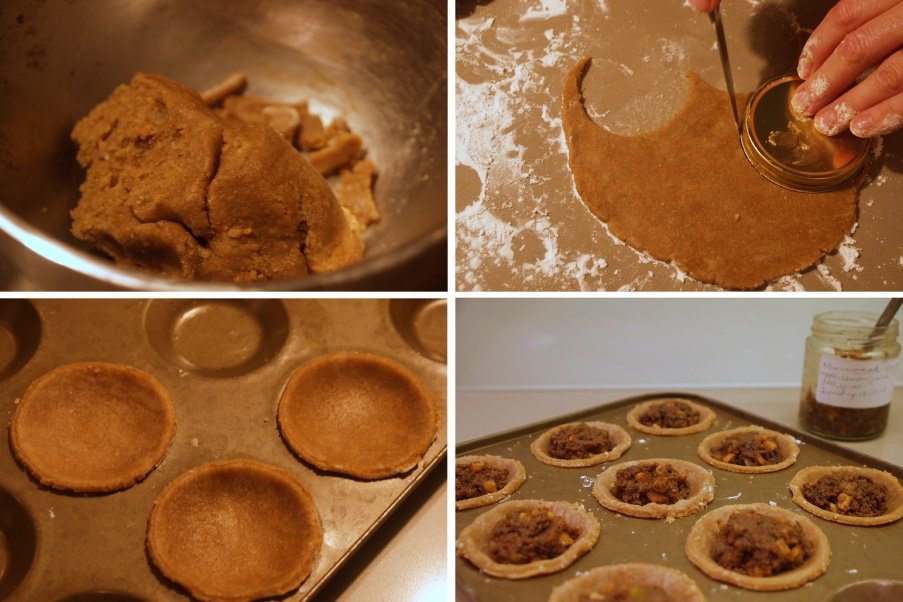 Lay the larger disc in your greased patty pan moulds, place a heaped teaspoon of cold mincemeat in the middle, place a slightly smaller round of pastry on the top after moistening the edge to enable it to stick to the base, and, with little finger tips, gently press the edges together.

Repeat with all the others, then prick the top of each mince pie lid with a sharp knife to make a slit to allow steam to escape during cooking.

Using the remains of the beaten egg, apply it to the lid of each pie thus making a glaze.

Place the full tray of pies in the pre-heated oven and time them for 12 minutes. Look at them and if they need to be a tad more golden give them another 3 minutes then remove them and allow to cool in the tin for 20 minutes before gently lifting them out with a round bladed knife and onto a cooling rack. 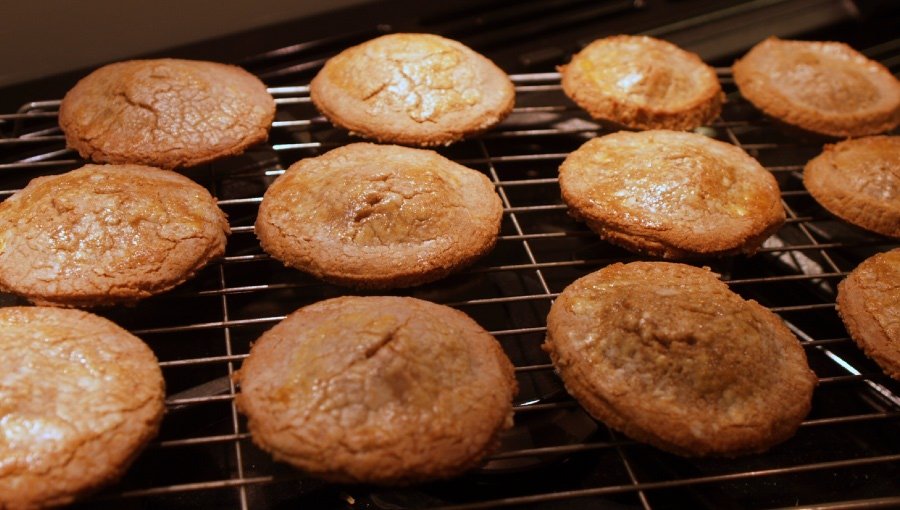 Once cold store in the fridge, in an air tight container for no more than 5 days. When guests come pop the requisite number in a baking tray and warm at 140°C for 10 minutes. Serve with the accompaniment of your choice: goat’s cream, clotted cream, egg custard, ice cream or brandy butter are all good options, depending on your dietary limitations. An egg custard can be made with whole goat’s milk or almond or coconut milk by the way for those who cannot eat any dairy products. Also, they can substitute the butter in the recipe for coconut oil. I have not tried this myself, but it should work fine. 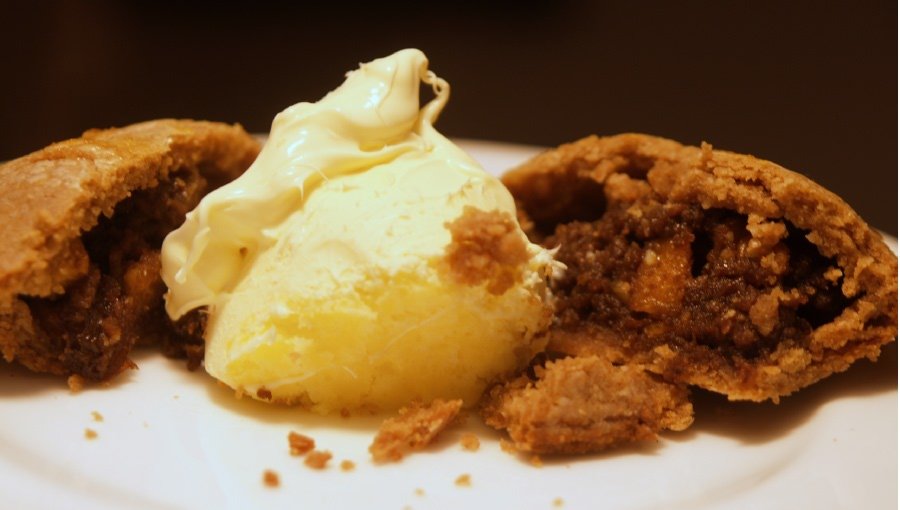 Here are my results, and I can tell you that my guests and I enjoyed them immensely this weekend.

One final thought. If the above sounds too laborious, take a leaf out of Pepys’ diaries and have your mayds prepare them for you.

“Lay pretty long in bed, and then rose, leaving my wife desirous of sleep, having sat up till four this morning seeing her mayds make mince pies.”