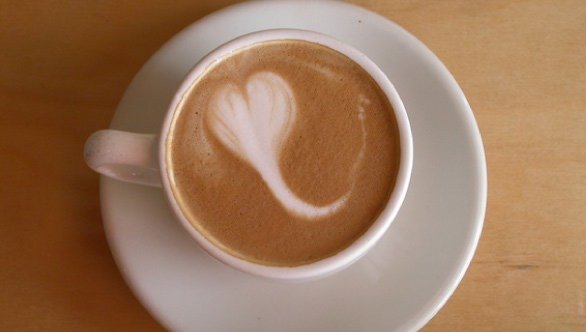 First, the good news about coffee consumption, then a warning for ‘slow caffeine metabolisers’.

Many people really enjoy a good cup of freshly brewed coffee, but there are lingering doubts in some peoples mind about its health-promoting credentials. A decade ago there were scare stories about possible links to heart disease and the caffeine content was considered harmful.

In contrast, it is now widely recognised that coffee contains many antioxidants and bioactive substances, and research in recent years has documented many health benefits to health. Even caffeine is seen as having positive effects on brain function for most people.

So, I wanted to share this beautifully concise abstract from a recently published paper entitled “Effects of coffee/caffeine on brain health and disease: What should I tell my patients?” written by Astrid Nehlig, research director at the INSERM facility in Strasbourg, France:

Over the last decade, Food Regulation Authorities have concluded that coffee/caffeine consumption is not harmful if consumed at levels of 200 mg in one sitting (around 2½ cups of coffee) or 400 mg daily (around 5 cups of coffee). In addition, caffeine has many positive actions on the brain. It can increase alertness and well-being, help concentration, improve mood and limit depression.

Caffeine may disturb sleep, but only in sensitive individuals. It may raise anxiety in a small subset of particularly sensitive people. Caffeine does not seem to lead to dependence, although a minority of people experience withdrawal symptoms. Caffeine can potentiate the effect of regular analgesic drugs in headache and migraine.

Lifelong coffee/caffeine consumption has been associated with prevention of cognitive decline, and reduced risk of developing stroke, Parkinson’s disease and Alzheimer’s disease. Its consumption does not seem to influence seizure occurrence. Thus, daily coffee and caffeine intake can be part of a healthy balanced diet; its consumption does not need to be stopped in elderly people.

Lifelong coffee drinking is also associated with reduced all-cause mortality, as a 2012 study published in The New England Journal of Medicine demonstrated. They tracked 400,000 participants from 1995 to 2008 producing over 5 million person-years of follow up data. During this time a total of 33,731 men and 18,784 women died.

The researchers found that the more cups of coffee individuals drank each day, the lower their risk of death due to heart disease, respiratory disease, stroke, injuries and accidents, diabetes, and infections. The association with all causes of death was also clear and dose-dependent with the maximum benefit seen at between 4 and 6 cups per day. Decaffeinated coffee drinkers had virtually identical benefits, so this confirms that there is more to coffee than just the caffeine. 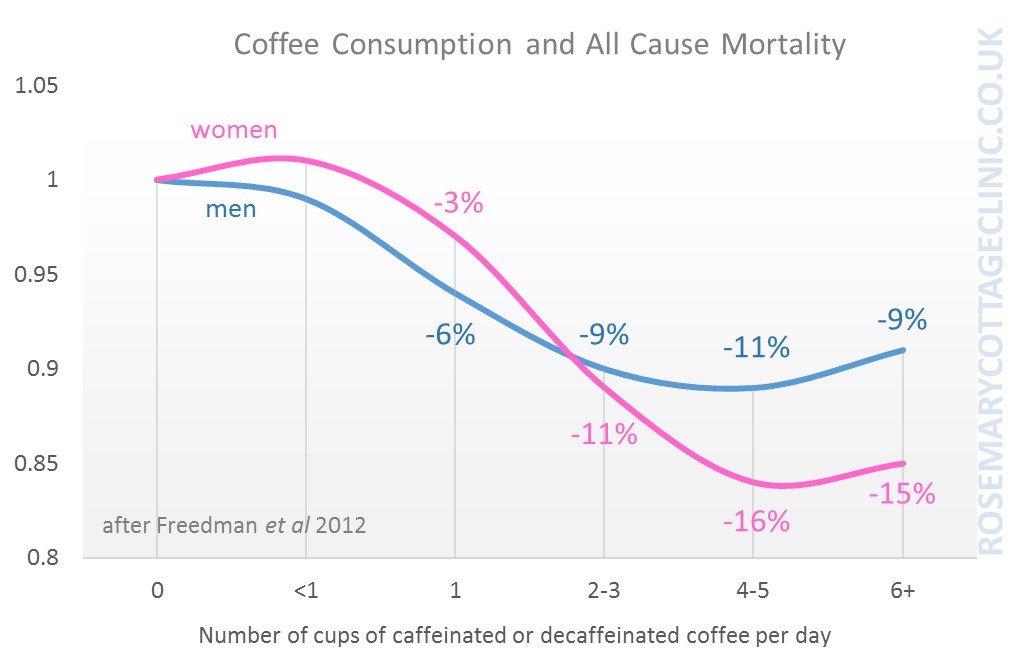 The benefits of coffee drinking are now so clear that I freely recommend up to six cups per day for most of my patients, but there are a couple of caveats, particularly important for certain individuals.

As I have explained in a previous post, caffeine has the potential to disrupt sleep (Sleep & Health: part 1 – Sleep’s central role). Sleep is so important for long-term health that any disruption to it should be minimised, even for people that appear otherwise healthy and report sleeping well. According to a recent study, the caffeine in one cup of strong coffee taken as long as 6 hours before bed adversely affects sleep, reducing sleep duration by an average of 1 hour [ref].

Because of this, I would not recommend drinking caffeinated coffee after 4pm, even if you think it doesn’t affect your sleep, the evidence is that it probably does but you are not aware of it. As decaff coffee provides the majority of coffee’s health benefits but with far less effect on sleep, it can be enjoyed liberally in the afternoon and evening. It’s a rule I stick to myself. I will have two or three cups of caff’ coff’ in the morning, and a couple of decaf cups in the evening. In the afternoon it’s got to be tea – but what would you expect from a born and bred English woman!

A large minority of people, unfortunately, have a genetic inability to break down caffeine. These ‘slow caffeine metabolisers’ have the CYP1A2 single nucleotide polymorphism (SNP) and cannot clear caffeine at the normal rate. For them, high caffeine intake increases the risk of myocardial infarction (i.e. ‘heart attack’). CYP1A2 gene activity is the ‘major determinant of caffeine clearance’ [ref]. A paper in the JAMA in 2012 compared rates of MI in people with the normal CYP1A2 gene (variant AA) with people that carried at least one of the defective genes (variant AC or CC). Those with the C version showed a significantly increased risk of MI with increasing cups of coffee per day, and the increase is large – being around 300% (triple the risk) with 3 cups of regular coffee per day.

As you can see for the bars on the left of the graph, people with the AA (normal) CYP1A2 genotype had a reduced risk of myocardial infarction, in line with the Freedman study above. Remember, in that study, these benefits were seen in caffeinated and decaffeinated coffee drinkers, with the implication that it is the antioxidant and other bioactive compounds in coffee providing most of these benefits.

Studies have shown that decaffeinated coffee often contains significant residual caffeine, at about 15% the level of regular coffee. With tea, chocolate and some soft drinks also containing caffeine it all adds up, and individuals with the CYP1A2 SNP should aim to keep their total caffeine intake in check. Avoid tea and chocolate and they might get away with an extra cup of coffee in the morning.

How do you know if you have the slow caffeine gene? It is difficult without testing, as carriers may or may not have symptoms. For example, many people who are ‘caffeine intolerant’ have identified for themselves that caffeine does not suit them. When they have coffee they might get a racing heart, sweating or become hyperactive, fidgety, anxious or unable to sleep. Many of them already limit their coffee intake. For others, they might not have made the link and their health may be suffering. The only way to know who has the CYP1A2 slow metaboliser gene variant is to have a genetic test.

For my patients, I offer genetic testing for a whole suite of genes, which like CYP1A2 allow personalised dietary and lifestyle recommendations that greatly enhance the effectiveness of nutritional interventions in a simple yet practical way. The sample is taken via a cheek swab, so the needle-phobic are not disturbed by this, and the swab is sent to the laboratory in Denmark for analysis. Results are sent back by email in a few weeks and reveal information that one can act on straight away. Such personalised medicine is surely the future of health care allowing us to go beyond the otherwise broad-brush dietary recommendations that inevitably result, even from the best observational and intervention studies.

If you wish to pursue genetic testing in this way call me to discuss it first, and I can explain the appropriateness, limits and uses in your case. I still offer a 15-minute free consultation to anyone who prefers to speak to the practitioner before booking an appointment, to get a feel for who they will be working with. If genetic testing is opted for I strongly recommend a one to one follow up session to discuss their particular results properly and in context.

The decaf ground coffee that I tend to drink is readily available and made by Taylors, using a water-based technique to extract the caffeine, rather than the solvents that can also be used. The Wikipedia page on ‘decaffeination‘ is quite informative.

2 thoughts on “Coffee – its light and dark side”