We were treated to a pair of lectures about the First World War since this meeting was so close to Remembrance Day, and what lectures they were!

Who better than Professor Christine Hallett who holds not only a PhD in nursing but another PhD in history RGN FRSM FRSA to be given the opportunity to take the podium and present the subject “Veiled Warriors: Allied Nurses of the First World War”. The description which followed of the work these women performed was riveting, and delivered at break neck speed, leaving me scribbling in darkness, trying to take notes in order write for you, dear reader, such that you get a feel for the event. Professor Hallett described the various ranks and requirements of the many nurses that served in this new type of war, previously unseen in the history of mankind.

There was a 2-3 year training course which produced the professional and highly proficient nurses, often drawn from the higher social classes and they wore the gorgeous and readily recognised uniform you see here in an original black and white photo, but you can see a museum mock up of it to the right.

These Professional Nurses worked closely with the VAD (Volunteer Aid Detachment) nurses, who’s uniform became the icon of the ‘nurse’, with the pale blue dress, white full apron, short white veil worn quite far back on the head, and the large red cross on the front of the apron. I even found this child’s nurses costume available on Amazon, which demonstrates just how clearly we all know this uniform for what it represents and alongside it is a photo of one of these brave and dedicated young women from WW1. 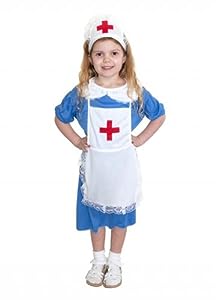 The nurses of Australia, New Zealand and the Allies of Belgium and France were organised in their own manner, in similar ways to our own, but in some countries, nursing was primarily done by nuns,
or simply volunteer women. It was probably this war, more than any other, that established the importance of the role of the nurse in every country in the world.

The circumstances and conditions that these women were plunged into could not have been anticipated and many became casualties along with the soldiers they tended as field hospitals were hit by shells, hospital ships torpedoed or trucks ferrying soldiers away from the front line were attacked. It was due to the experiences of this war that the need for medical care far closer to the front line was recognised, and became a priority. This continues today, with mobile helicopter medical teams that fly in, collect casualties, treat them sufficiently for maintenance of life and deliver them to better-equipped land-based hospitals further away from the action. In this way, we now have a vastly improved survival rate following what would otherwise have been fatal injuries. In WW1 these were called Casualty Clearing Stations (CCSs) and as these were developed, with immense input from the nurses, the terrible rate of fatalities that shocked Whitehall in the earliest months of the war did reduce significantly.

Below is a photo of Miss Kate Evelyn Luard who was a supervisor of an advanced abdominal surgery ward. She was one of the most responsible and also most at risk nurses at a CCS during the Battle of Passchendaele. Below is a book of her letters written from the front.

This is one of the beautifully ordered wards, with soldier patients, doctors and nurses posing for the photo. Trench warfare conditions presented appalling challenges to survival. Even without the shelling, gas attacks, shooting, dysentery, typhus and frost bite, there was the dreaded ‘trench foot’ to contend with! Oh, and shell shock, of course. Nurses had to handle all this and the actual war itself, and they too fell ill with the same contagious diseases as the men, or just from utter exhaustion.

The horrors of WW1 can be seen from many different standpoints, and the experiences of nurses is a very close perspective indeed. Their care made a very significant contribution to the outcome for countless people.

The second lecture “Wounded – The Long Journey Home from The Great War” was by Dr Emily Mayhew MSc PhD.

The subject Dr Mayhew brought to our attention is illustrated in the book cover, left; the Unknown Warriors  were the Stretcher Bearers.

Dr Mayhew is a Military Historian and Historian in Residence at the Royal British Legion Centre for Blast Injury Studies at Imperial College London and in recent years has focused on this thoroughly overlooked aspect of the Great War. Stretcher bearers were absolutely vital to the survival of our troops on the front line. Frequently recruited from the conscientious objector community, including Quakers, these men were put through a six-week training to ensure physical capability and strength, which involved carrying 10 stone (63.5 kg) weights, on stretchers, up and down Box Hill in Surrey (the very same has more recently been used by Sir Bradley Wiggins in his training for the Tour de France and Olympics).

They were also taught life saving skills that could be employed right there in the field or in the trenches, and the number saved through their ministrations cannot be known. Another aspect of their work was that of kindness, reassurance and compassion in hand holding, gentle words and deep understanding, which is truly immeasurable in its impact to a wounded or dying young man.

It is very easy to overlook certain vital factors in how things actually work. For example, to a great extent we overlook and ignore the connective tissue in our bodies, even though nothing could function without it, as it connects all the other more identifiable tissues, organs and structures. In the same way we, en masse, have somehow overlooked the essential role that the stretcher bearers played. And not only have we overlooked their active work but also some of the vitally important innovations they brought to medicine.

Dr Mayhew used no images, but none were needed as her verbal illustration, knowledge, and passion conveyed all one needed. Having said that, stretcher bearers are not really invisible, it is just that it has not been discussed before. Many, many images of the Great War actually do show these heroes, who not only saved others but were frequently casualties themselves, being easy slow moving targets once they had their charges in their stretchers. They simply have not hitherto been focused on even though theirs was a pivotal role.

Here then are classic First World War photographs, but this time I want you to focus on these men and note how you, as I, recognise that their role has been overlooked and their images interpreted as impersonal images of that war. I need write no more, as the pictures tell the tale far better.

Thank you Dr Mayhew for opening my eyes to the labour, goodness and sacrifice of these unsung heroes.