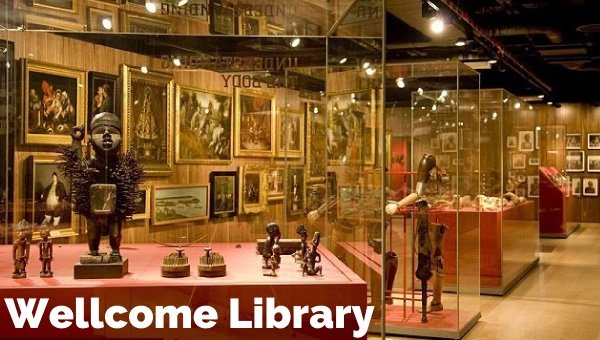 Nicholas Cambridge MD MRCS FSA FLS FRSA gave us a very interesting presentation about a chap I had never even heard of, a certain Dr Alfred Carpenter: ‘Archbishops, East India Company & Public Health: Life as a Busy Victorian GP’. Here is my precis of the event:

The first slide in the lecture showed an effigy of Dr Carpenter being burned during an outpouring of public anger in 1884. The cause of this outrage was due to this Victorian public health advocate’s vociferous support for the temperance movement and particularly the calling for pubs and taverns to be closed on Sundays. Brits, it seems, just don’t like being finger-wagged when it comes to traditions they hold so close to their hearts. 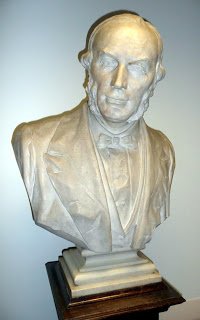 It was not always that way though. Dr Alfred Carpenter (1825 – 1892) started out as a humble son of a country apothecary who stood in for dad when he was ill and found he rather liked doing the doctorly thing. This led to him studying at a number of institutions where he gained many prizes for academic excellence, leading finally to his occupation as a general practitioner in Croydon, which, in the 1850s, was a small town outside London boasting eighteen doctors, one for every 1000 townspeople.

It was here that he made his home and his reputation in the subsequent four decades. During this period he cared for the physical wellbeing of no less than four archbishops, which must surely be a record. They were John Bird Sumner, Charles Thomas Longley, Campbell Tait (whose whole family suffered rather disastrous health outcomes) and lastly Archbishop Benson, after whom a school in Truro is currently named.

Probably the most important and lasting effect of Carpenter’s work in Croydon was due to his abiding interest in public health. Indeed he had written a book ‘The Principle and Practice of Public Hygiene’ in 1848, before arriving Surrey, so was able to work to bring about things like sewers in Croydon which had hitherto had none and, as a rapidly growing town, suffered waves of epidemics of cholera, typhoid and smallpox. We were shown a remarkable picture of the newly built domed reservoir for the town (see below) which was opened by the Archbishop of Canterbury. Although everyone was very hopeful that such population threatening diseases would now be a thing of the past, Croydon went on to lose 10% of its inhabitants to typhoid fever in 1852, leading to repairs and further improvements to the infrastructure. Even so, another outbreak of 1200 cases of typhoid, in 1875, lead to a lot of head scratching.

Public baths were set up, which must have given a boost to to personal hygiene, but smallpox struck in 1879 leading to a lot of controversy about smallpox inoculations, with Dr Carpenter fining parents 5 or 10 shillings if they declined to have their children vaccinated, so certain was he of their efficacy. Interestingly, the term ‘conscientious objector’ was coined in describing those people (many of whom were doctors) who did not acquiesce to the pressure to vaccinate their children.

Following his exposure to the progressive work of John B Lawes FRS in a talk titled ‘The Sewerage of London’ Dr Carpenter worked on the concept of sending Croydon’s sewage to the fields of ryegrass nearby, to grow grass good enough feed local dairy cows. This process was a complete success, and no taint of microbes from the human sewage was found in the milk when tested independently. Everyone was mightily impressed with this.

Alfred Carpenter, who died a wealthy man at the age of just 66 of ‘cerebral exhaustion’, had a hand in many good works, including an involvement in ‘schools for ragged children’, on hospital boards, with the temperance movement, as president of the local cricket club (though a non player), the church choir (though a non singer) and with charities of all sorts, but to me his involvement in sewers and fresh piped water places him in a genuinely important historical position.

Here in Chichester we were twenty years behind Croydon, building our sewers only in the 1870s and it took us until the 1890s for water pipes to reach this little town. Well done Dr Alfred Carpenter for getting this process up and running so much sooner in Croydon.

Henry Wellcome almost needs no introduction as we all know the importance and influence of this handsome and extraordinary man, but hearing about his origins, personal journey, obsessions and achievements was really wonderful.
I had not realized that he was born in the era of covered wagons and efforts to claim the land from the natives in northern USA (Wisconsin, 1853). The son of an itinerant missionary his family and others literally arranged the wagons in a circle round a fire in the evening and set a watch in case of attack by the local Sioux Indians who were trying to drive out these imigrants from their lands! To go from that unprepossessing start to the status of a man of immense wealth, head of his own super successful pharmaceutical company and outstanding world renowned museum is quite something! I am afraid the Sioux did not do so well from this clash of cultures.

Starting with selling invisible ink at the age of 16 (yes, it was just lemon juice, as you and I have used) to becoming the most brilliant salesman possibly of the century, this chap really recognised gaps in the market to exploit like no one else. His ability to present his drugs was striking, and he introduced the concept of drug reps, and customer feedback, all totally innovative and game changing.

Henry’s life was about collecting, as well as marketing. He loved medical equipment from all corners and cultures of the globe; he was fascinated with collecting herbal medicines, statues, mummies, and archeological artifacts of every sort. Travelling must have taken decades of his life, as he went all over South America, many parts of Africa, including setting up a large archeological excavation in the Sudan, and all over the globe, collecting and collecting as he went. They say that when he died in 1936 at the age of 82 there were warehouses filled with crates of items he had caused to be brought to England. Indeed it is reckoned that every museum in the UK, and probably many abroad too, house artifacts directly from his sources.

Henry Wellcome and his wife Syrie, daughter of Dr Barnardo, are shown here in an awkward pose, representing their awkward and unsuccessful marriage which lasted from 1901, when she was just eighteen, to 1910 when she left him though the divorce was not finalized until 1916, amidst great media interest. She had been having an affair with the writer W Somerset Maugham, and became his wife, producing a daughter with him. The son she had with Henry, called Mounteney, was something of a disappointment to him as he did not have a head for business or running the extraordinary emporium that his father had created. However he did enjoy the life of a farmer which he settled to in one of the Home Counties.

↑Henry Wellcome with some of the Sudanese workers at the archaeological site there. 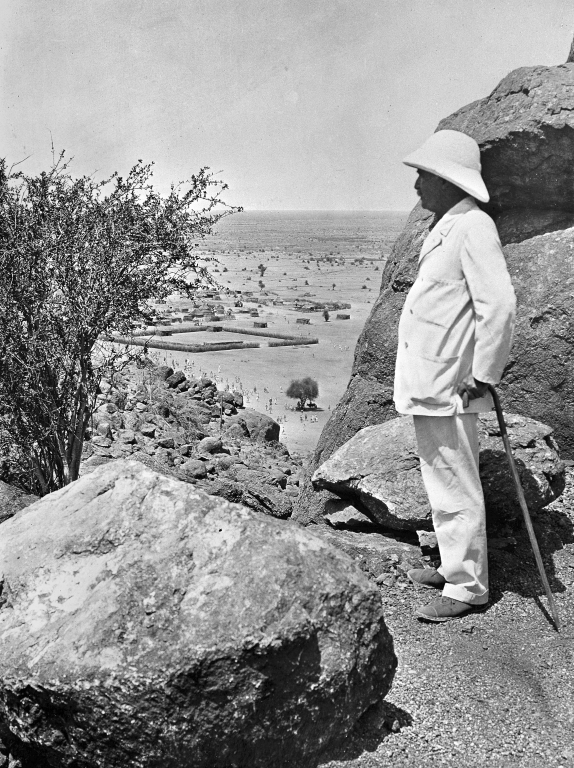 The museum built and paid for my Henry Wellcome to house his astounding collection is as grand and wonderful now as it was when it was opened in 1931, situated as it is at 183 Euston Road, London. Here it is lit up for Christmas, looking utterly inviting.

A trip to this exciting and fantastical place is highly recommended.

Here is a glimpse of part of the interior:

Thank you Professor Tansey for your enlightening presentation.