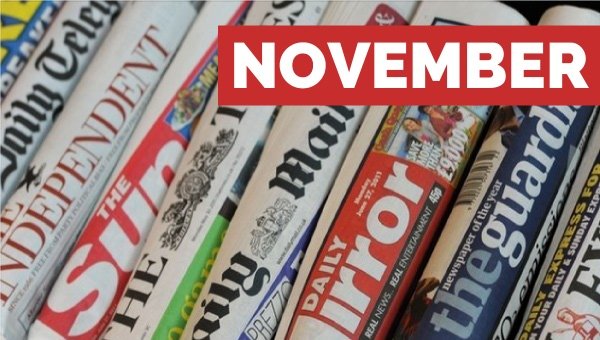 Just creeping into this month’s round up – The Daily Mail (30th November) reports on the ‘Going Gluten Free’ study organised by Aberdeen University’s Rowett Institute of Nutrition and Health.

It found that 3 weeks on a gluten free diet reduced bloating, flatulence and fatigue in otherwise healthy participants. Dr Alexandra Johnstone, of the Rowett Institute of Nutrition and Health, said: ‘It was interesting to discover that a gluten-free diet improves feelings of fatigue, with participants reporting much higher energy levels during the gluten-free period of the study.

‘The fact that they were able to start tasks quicker, concentrate better and think clearer during this time, and felt the need to rest less, all point towards the idea that sensitivity to gluten does exist for some individuals who don’t have coeliac disease.

Gluten free diets have been linked with poor dietary habits as individuals head for the gluten-free aisles, but the recent promotion of real foods may have paid off: in this study participants overall dietary quality improved with consumption of more fruit and vegetables and an increased fibre consumption! I’ve highlighted that as we have been arguing on this blog that a proper gluten-free diet should improve the overall diet and lead to increased fibre intake.

Just a pity it was part-funded by a gluten-free food manufacturer.

The role of large herbivores in the landscape is increasingly being recognised for their environmental benefits. The meat from such animals is also considered healthier – higher in omega-3 fats, vitamin A and E. So it was pleasing to read in The West Sussex Gazette (31st October) of the recent introduction of Dexter cattle – a short stocky breed – to maintain endangered South Downs grassland at Steyning, West Sussex. What is more, the meat from these animals is available from Garlic Wood Farm butchers.

“My aim was to establish an efficient and sustainable farming system, producing a quality product raised solely on pasture that would benefit both the environment and human health.” – Frances Sedgwick, Cattle Breeder 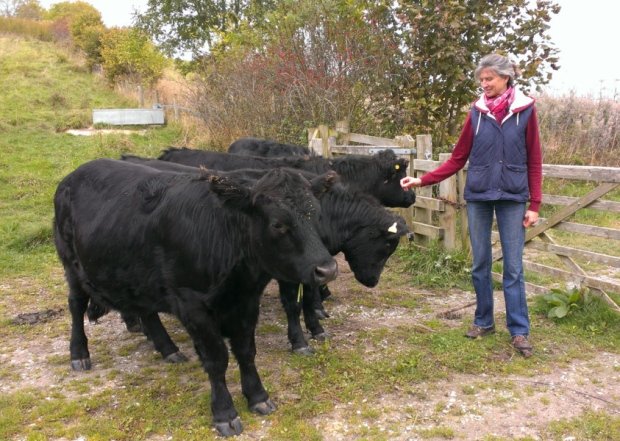 Also looking at the intersection of conservation and food was Radio 4’s Hardeep’s Sunday Lunch (29th November) which addressed a controversial topic: the proposal that we should encourage the use of Dartmoor hill ponies for meat.

Dartmoor and Exmoor have semi-wild pony populations that helped create those iconic landscapes, but economics mean that their numbers are dwindling. One proposal to keep this ancient form of land management viable is to encourage the eating of pony meat. You can listen again until 28th December to this thoughtful and heartfelt radio documentary.

Closer to home, the Knepp rewilding project also has herds of Exmoor ponies that look for all the world like the 17,000-year-old cave paintings from Lascaux in France. Knepp too is facing the thorny question of whether it is right that these magnificent animals should go to waste when their population needs culling, rather than sold as prime pasture-fed meat. I’m sure the cave painters wouldn’t have any doubts.

New Scientist (25th November – you need to register to read it) has an article on the ketogenic diet for epilepsy but also touches on its uses in other brain disorders and cancer. It’s worth a look as it provides a reasonable overview of some of the basics of the diet. However, the news bit is that researchers recently found (in rats at least) that the saturated fatty acid is known as decanoic or caproic acid suppressed epileptic brain activity rather than the ketones.

Caproic acid is present in coconut oil (10%) and butter (2%), both of which can be used in the ketogenic diet. Unfortunately, neither the paper nor New Scientist points out that in humans seizure control has been achieved without the use of this medium chain triglyceride, indicating that there is more to the ketogenic diet than caproic acid. Both ketones and low-glucose/insulin levels induced by the diet have been shown to have multiple protective effects on the brain.

Meanwhile the ketogenic diet for weight loss featured in The Express (23rd November) with typically tabloid panache: ‘Woman shed a THIRD of her bodyweight eating MORE bacon and butter’.

The ketogenic diet is increasingly being used in endurance sport as reported in Men’s Fitness (17th November), based on a study by world expert Jeff Volek, in which the fat burning levels of athletes on the ketogenic diet was found to be twice that of carb loading athletes.

It’s been a big month for vitamin D research with a host of stories making the newspapers:

In previous posts we have advocated maximising vitamin D levels from midday sun exposure short of burning (Why April 15th is D-Day in the south of England) so as to gain the highest UVB:UVA ratio. So it is gratifying to see researchers from the University of Oslo come to the same conclusion in a paper published this month:

The best way to obtain a given dose of vitamin D with minimal carcinogenic risk is through a non-burning exposure in the middle of the day, rather than in the afternoon or morning. Grigalavicius et al, International journal of dermatology (Nov, 2015)

Here at Rosemary Cottage Clinic patients avail themselves of the wall mounted UVB 311nm narrowband lightbox on a weekly basis throughout the autumn and winter months to ensure they retain healthy levels of vitamin D to keep them well.

For those who wish to check their vitamin D levels, I now have sealed test kits in stock at just £28 each, supplied by a specialist vitamin D test centre. So if you want to do a ‘before and after’ test get in contact to arrange it.

A false alarm on red meat and cancer

Following last month’s panic when the WHO classified red meat as a possible carcinogen the UK saw double-digit falls in sales for three weeks. So it’s nice to see The Financial Times (24th November) taking a critical look at the quality of the data, like we did, and concluding that it was a ‘false alarm’.

Gordon Guyatt, an epidemiologist and professor of medicine at Hamilton’s McMaster University said: “Two large trials have tested for evidence and the WHO ignored both of them.” He claims the WHO evidence is “very modest” and might easily be attributable to other confounding factors observational studies can’t fully adjust for (The National Post, 29th October).

It has also come to light that one of the leading advisors to the WHO is a lifelong vegetarian who has voiced moral and environmental objections to meat eating – how objective is that?

As if to make up for damage done, The Daily Mail (2nd November) had a pretty good article reviewing many of the health benefits associated with meat.

Sorry to end on a bad note but forecasters are predicting chocolate prices will rise next year thanks to poor harvests in West Africa and strong winds caused by the El Nino weather system. If you can bear to read more, The Telegraph (30th November) give the full gory details.