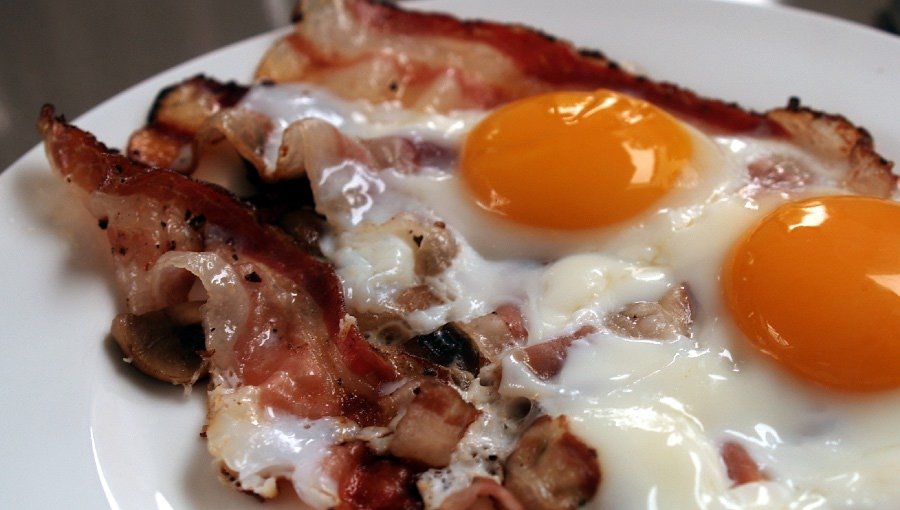 Bacon is part of traditional English cooked breakfasts but is also a versatile ingredient that imparts an unmistakable flavour and texture to other dishes. Its famous irresistibility has been the downfall of many a vegan wannabe. Bacon has developed something of a bad-boy reputation with a raft of (unwarranted) nutritional concerns that get between you and it:

But its too high in salt! – See our post ‘Salt of the Earth’ here. But it contains nitrates and nitrates! –  we previously reviewed the research on pork and bacon, and found trials demonstrating positive outcomes suggesting that concern over nitrates and nitrites may be misplaced – indeed some studies show bacon may have protective effects on the intestines! But red meat causes cancer! Maybe, maybe not, but did you know that dietary calcium (from cheese and milk) completely prevents the formation of the putative carcinogens produced by red meat in the gut. So we’ve added some halloumi to our fry-up in the cooking comparison at the end.

Our conclusion: If you are eating a high quality varied diet you don’t need to worry about bacon. So, lets tuck in to some of the best bacon around…

This pancetta is delicious having a herby crust that gives it a distinct flavour. We ask for it to be cut very thinly and the ensuing strips are almost transparent. Being more than 50% fat these need just the briefest time in a medium pan to become crinkly and cooked – in fact they don’t even need additional fat in the pan as they will cook in their own lard. Leave them in for longer and they crisp up nicely, making a great snack once cooled.

In the end I gave it four stars as its not organic nor do we know the welfare standards, and it’s expensive at £25 per kilo – but still brilliant, even in small amounts.

This is a mainstay in our house and we reckon it’s the best supermarket bacon you can buy. Being dry-cured and with no added water there is none of that white foam that inferior bacon produces, nor do these rashers immediately shrink in the pan.

The process of air curing – which takes fourteen days – actually reduces the water content compared to the raw meat, making these very good value for money. In fact with a protein content to 28g/100g these are likely to have a higher nutrient content – think zinc, iron, b-vitamins – than many lean cuts of prime pork! This increased density gives tham a good meaty flavour and the dry curing means they are not too salty either. They are available smoked, if you prefer, but we buy the unsmoked version.

Whilst each rashers is narrow, you get fourteen in a pack; This is great if you are cutting them into pieces for liver and bacon, and being a uniform width they work well laid over a roast chicken or wrapped around grain-free sausages. For a good old English fry up they are superb.

Although they are not organic, they are made using British pork adhering to the RSPCA’s strict Freedom Foods farm assurance scheme. The production in Yorkshire, is overseen by the butcher whose traditional bacon was so good that it was sought out by Jamie Oliver, Anthony Worrall Thompson and Rick Stein. You can read the interesting back story here:

These are a good runner up in the British streaky bacon, dry-cured category and come a close second to the Sainsbury’s ones above. Although more expensive, you do get an extra 30g per pack, but they are lower in protein 18g/100g.

We wanted to include one organic bacon and we have bought this one in the past. Whilst its nice that it is organic, it is disappointing that the pork is Dutch rather than English.

Although each rasher is more traditional in shape than the Sainsbury ones above, you only get 6 in the pack, and because they are wet rather than dry cured they only have about half the protein and fat content.

In our cooking test these rashers shrunk considerably, and oozed some white foam as wet-cured bacon is want to do. The taste, however, was very good, but pound (£) for pound (lb) you are only getting half the protein and associated nutrients compared to Sainsbury’s air dried rashers. This limited the Tesco rashers to only three stars.

Which is your favourite bacon? Let us know in the comment section.