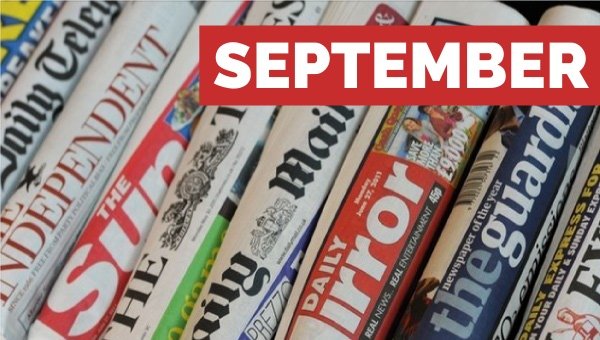 A new analysis links higher levels of fish consumption with reduced rates of depression. This was reported by the BBC (September 11th).

Researchers suggest it is the omega 3 oils that are responsible for the observed benefits.

Probiotics in pregnancy and childhood

One I missed last month: probiotics may cut chances of an early birth, reported in the Daily Mail (August 18th). Screening identified low levels of friendly lactobacillus bacteria in the reproductive tracts of women who had premature births.

Beyond the age of 35 most men and women gradually begin to lose muscle mass – a process that eventually leads to an increased risk of falls in old age.

This has led researchers to recommend increased protein consumption from middle age. Interestingly, new research has suggested that ursolic acid, found in apple skins, can reverse some of this age-related decline.

The Daily Mail (September 10th) gives a brief overview, whilst a more in-depth report from the University that published the study can be found here.

Good news – according to SeeMallorca (October 1st) this year’s harvest of our favourite nut – almonds – is set to break all records. Bad news – prices are expected to rise. This is in line with the excellent Spanish organic ground almonds I stock, which have risen in price every year for 5 years! Ground almonds are used in my recipe for the best grain-free-pancakes around and in a good few other recipes by yours truly on this blog (see under recipes). Meanwhile, Bloomberg (September 23rd) reports that Australian almond growers are suffering a spate of bee-hive thefts – bees being essential in the pollination of large almond groves.

Gluten-free recipes with almonds in the news:

The Guardian (August 30th) had an interesting article suggesting that commercial baby foods contain too narrow a range of flavours to encourage the development of a broad palate, with consequences for children’s future health. This chimes nicely with a couple of books I have recently read and would recommend: French Children Don’t Throw Food and The Dorito Effect: The Surprising New Truth about Food and Flavor (click to see on Amazon)

The War on Sugar

MedPage Today (September 29th) reports on a study that claims fructose from sugar-sweetened drinks is the primary driver of the obesity epidemic. Meanwhile, the politics of the sugar war is found in that esteemed journal of scientific balance, Nature (September 30th) – in the form of a book review, Soda Politics: Taking on Big Soda (and Winning).

Meanwhile, The Wall Street Journal (September 28th) reports on one of the casualties of the sugar war – Coca-Cola is withdrawing from nutritional funding “after critics accused the beverage giant of trying to downplay the role of sugary drinks in obesity.”

Sugar industry tactics are revealed in the Daily Mail (October 1st) who report that the quantity of sugar in major brand fizzy drinks varies enormously in different parts of the world.

After many reports claiming that saturated fat isn’t as bad as once thought, Harvard University comes out with a study claiming that margarine (vegetable oil) is better for heart health than butter. Most newspapers went with the obvious “Saturated fat is bad for you after all” line. However, The Telegraph manages a much more nuanced approach – so read their article first!

A recent consumer report in the USA found that Grass-fed beef contains fewer harmful bacteria (September 29th – includes video report). Experts blame the explosion of drug-resistant bacteria on the overuse of antibiotics on cattle farms. We previously posted that MRSA is linked to antibiotic use in farm animals. The bottom line: go for organic meat, or better still…

The Telegraph (September 26th) has a great article on our favourite rewilding project, at Knepp. (See our article Rewilding our Food)

Now is the time of year to get some Knepp re-wilded longhorn beef or venison. You can order a box from Garlic Wood Farm, or visit their butchers to select your cut. This is grass-fed meat of the highest order, having lived wild, eating naturally in the Sussex landscape. I recommend contacting them to ensure you are getting Knepp meat.

I have just visited them to collect several cuts of Knepp beef. The rump steak was absolutely delicious. I’ll finish with a gallery from my kitchen to whet your appetite!