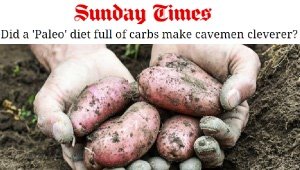 Did you see these recent headlines? If not take a moment to scan them now.

Whilst The Telegraph managed a restrained “Paleo diet should include carbohydrates to be authentic, say scientists“, many journalists took the opportunity to really put the boot in with “What Paleo diet experts think – and why they’re wrong” (The Guardian), and “Scientists confirm that the Paleo diet is nonsense” (Quartz). Whilst Delish reached fever pitch with “A New Study Proves That “Paleo Diet” Is Total Bullsh*t (Hooray, carbs!)“.

The scientific paper that stimulated this latest round of paleo-bashing hysteria was “The Importance of Dietary Carbohydrate in Human Evolution.” by Karen Hardy et al, published in The Quarterly Review of Biology (the full text is free, so you can read it if you want). In this paper Hardy et al argue that consumption of cooked starchy tubers played a key role in the expansion of the human brain over the last 800,000 years of human evolution. I’ve made a little graphic so you can orientate yourself on the human brain expansion timeline. Hmm. Seems it did a lot of growing prior to that date, but I’ll address the points raised in this paper in future posts, as it provides many good points for discussion, but for now I’d want to examine the may the media dealt with the issue.

Anyone reading headlines stating that “Scientists confirm…” or “A new study proves…” would be forgiven for thinking that some new experiment or trial had taken place. Unfortunately, Hardy’s paper does not contain any new data at all – so it’s not actually a ‘study’ in any sense. Rather, it presents a new (ish) hypothesis that argues for a particular interpretation of existing data. This isn’t to diminish it in any way – it is a totally valid academic piece which contributes to a large body of thought on this fascinating subject, but as one of the co-authors, Mark Thomas, Professor of Evolutionary Genetics at University College London, says “Our understanding of what paleolithic people ate is hypothesis-rich and data-poor”. As such, Hardy’s paper will be the subject of sober academic reflection and debate for some time to come and will no doubt provide a stimulus for future studies that aim to test the hypothesis through trials or data gathering.

What Hardy’s paper does not do, and cannot do, however, is “prove that the paleo diet is nonsense”. A hypothesis does not prove anything, and as we will see below the idea that humans ate starchy roots is not even a new idea in paleolithic nutrition, despite what the newspapers’ headlines would like you to believe.

What the papers say a paleo diet includes

This is basically correct. Yet that didn’t stop them illustrating these articles with the good old potato – a vegetable that did not exist pre-agriculture!

Humans must have evolved on diets based on wild foods that could be hunted and gathered so Paleolithic foods clearly included wild roots, bulbs and tubers. So how can Harvy’s suggestion that wild tubers may have played an important part in human evolution in any way prove that the “Paleo diet should include carbohydrates to be authentic”? The paleolithic diet has always included carbs as and when they were available. Such newspaper headlines are a non-story.

When Afifah and I gave our first public talk “Ancestral Nutrition” to a packed auditorium in 2012, before the term ‘paleo diet’ was commonly seen in the media, we used the following slide to illustrate what a paleolithic diet looked like: 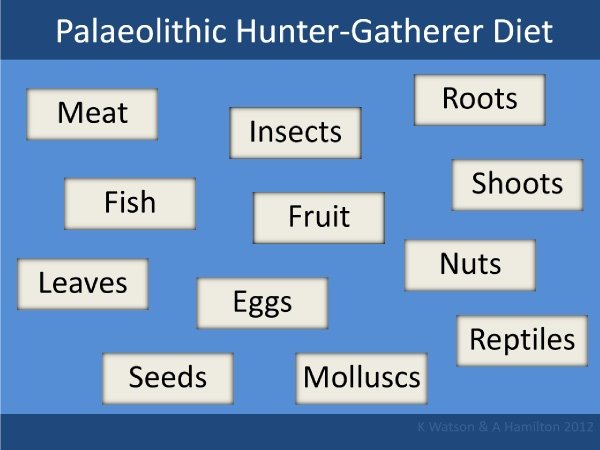 The point of this slide is that these foods are available virtually everywhere on the planet to hunter-gatherer populations. These are the foods humans eat. Being omnivores, humans will always exploit the available plant and animal resources in their environment, and this has always included ‘roots’ i.e. tubers, i.e. carbs, where they were available. Hardy’s paper is not controversial for arguing that a paleo diet included tubers. Yet the news papers seem to think it is. Of course the foods missing from the slide above are the real culprits – foods that do not belong in the paleolithic diet – and they are cereal grains, vegetable oils, refined sugar, dairy products, pulses and the huge range of chemical additives now found routinely in processed foods. These industrialised foods have only been in the diet for a vanishingly small fraction of human evolution – about the same short time that the so called diseases of civilisation – obesity, diabetes, cancer, heart disease, acne and dementia – have become leading causes of death and disability. Eschewing these industrial foods, not tubers per-se, is the basis of the paleo diet.

The idea that a paleolithic diet must be low carb is an inaccurate representation of the background science. It is well recognised that evidence for early man’s reliance on meat is well represented in the fossil record – because bones preserve well – whilst evidence for the use of plant foods (and marine resources) is harder to come by. One way that researchers get round this limitation is by studying contemporary hunter gatherers who act as surrogates for possible dietary strategies from earlier periods of history. 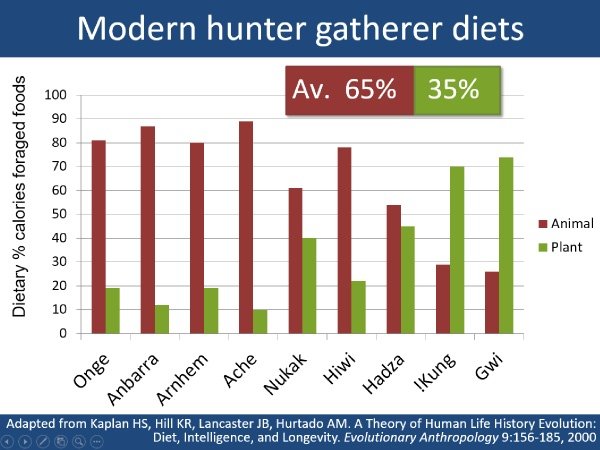 This graph was compiled from data on the utilisation of plant and animal resources by a number of contemporary hunter gatherer tribes. The green bars show the percentage of calories obtained from plants. These plant calories would largely be derived from carbohydrates and small amounts of protein, although in some cases they may include substantial amounts of plant fats. For example the !Kung eat large amounts of Mongongo nuts which are high in fat. The animal sources, by comparison, contain practically zero carbohydrates. The average carbohydrate intake was, therefore, somewhat less than 35% of calories, and more than half the tribes thrived on less than 20% carbs. Compare that to the percentage of carbohydrates in the modern Americans diet, which from 1970 and 2005 rose from 44% to nearly 50% [Austin et al, American Journal of Clinical Nutrition, 2011] This increase in carbohydrates went from very-high to extremely-high, coincided, unsurprisingly, with an explosion in obesity and related diseases.

Dr Loren Cordain, who The Guardian acknowledges as “the founder of the Paleo movement”, stated in his 2000 paper in the American Journal of Clinical Nutrition, that compared to typical western dietary patterns, hunter gatherers have “universally characteristic macronutrient consumption ratios in which protein is elevated at the expense of carbohydrates.” He’s not saying zero carbs. Not even low-carbohydrate like Atkins. Just lower carbs and higher animal protein than a typical western diet.

Perhaps more important than quantity is the source of dietary carbs. Paleolithic carbohydrates came from nuts, tubers, fruit and vegetables, rather than from grains that now dominate western diets. Furthermore, Cordain’s rather modest conclusion, that we might be better off eating this way, has been successfully tested in multiple dietary intervention studies, including randomised controlled trials which I will list below.

Quotations from these studies

Yet despite these findings The Guardian chooses to slate Dr Cordain under the headline “What Paleo diet experts think – and why they’re wrong”. How journalists are happy to state that “scientists prove ‘Paleo Diet’ Is Total Bullsh*t” (Delish) when every trial so far conducted has demonstrated positive effects beggars belief!

In their 2011 paper, Diets of modern hunter-gatherers vary substantially in their carbohydrate content depending on ecoenvironments: results from an ethnographic analysis, Ströhle and Hahn found that hunter-gatherers living within 40 degrees latitude of the equator, primarily in desert and tropical grassland, consistently have carbohydrate intakes of 30%-35% of calories, confirming estimates from the Cordain paper mentioned above. However, beyond 40 degrees latitude, the percentage of carbohydrates consumed falls dramatically, reaching less than 15% for hunter gatherers living in tundra and northern coniferous forests. For 50,000 years homo sapiens has survived in regions where routine carbohydrate intake was close to 15% of calories. That’s much closer to Atkins. And many people of European, Native American and Asian descent have inherited a good percentage of DNA from those hunter gatherers.

Typical Western diets, then, are way above the upper range of normal human consumption. Interestingly, the realisation is growing among policy makers that the last 30 years advice to restrict fat consumption may have been counter productive as it led ‘inadvertently’ to increased carbohydrate consumption, which “may have fueled the obesity epidemic” [Do the dietary guidelines have it wrong?, BMJ, 2014]

The newspapers, of course, always look for an attention grabbing headline and have spun the story so they can knock down their own straw man. They can’t help it. It’s in their blood. Unfortunately the public are left with a distorted impression of the science, which does them a disservice.

So were our ancestors “potato heads”?

Finally, almost all of the newspapers illustrated this story with images of potatoes, and to some extent Hardy’s paper encouraged this by referring to the fact that cooking potatoes makes the starch up to twenty times more available for digestion. Indeed, potatoes are very rapidly digested, and produce a rapid spike in blood glucose. But rather than being associated with improved brain function, such high glycaemic index (high GI) meals have been shown to dis-regulate regions of the brain linked to obesity. One example, a 2013 study in the American Journal of Clinical Nutrition, found that compared to a low GI meal, a high GI meal increased hunger, and “selectively stimulated brain regions associated with reward and craving in the late postprandial period”. i.e. made participants feel hungrier sooner and eat more as a result.

Hardy’s paper argues that humans “needed a rich source of glucose (from starch) to fuel the growing brain”. If that were true, then how come we didn’t evolve the ability to avoid the hypoglycaemic crash that follows a high GI meal 4 hours later?

So are potatoes representative of the kinds of tubers that our ancestors ate? And was cooking effective at releasing starch for digestion? Were such tubers anything like the high GI potato the newspapers were promoting?

Fortunately, some very recent research sheds light on this. I’ll look at it in the next post.