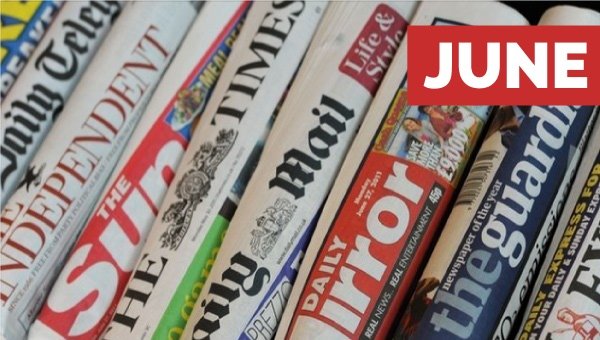 Body fat is more than just for calorie storage: it is a highly active metabolic tissue. This is highlighted in a Daily Mail (June 8th) article reporting that during a heart attack excess body fat can actually protect the heart by releasing antioxidant and anti-inflammatory compounds.

MedPage Today (June 17th) reports on the US FDA’s decision to ban trans-fats from foods (Hurrah! The UK should follow suit) Then on June 24th they told us that the dietary guidelines for Americans would also lift the cap on Guideline Daily Amounts for total fat consumption. (Double hurrah!) – we were so excited about this news that we made a video about it here.

Giving mice a hard time in the name of nutrition science…

Carrying on the fat theme, the Daily Mail (June 21st) reported that mice on an obesogenic diet gained less weight if fed the equivalent of two to three portions of berries a day. Apparently, the berries turned some of their normal fat tissue turned into calorie-burning healthy beige fat. However, the quantities of fruit needed would mean ingesting a lot of fruit sugars – which in another study wasn’t so good for our whiskered friends…

Oh, yes we have… Scicasts (June 10th): “New research in a mouse model of autism showed that low glycemic index diets, similar to the plans that people with diabetes follow to keep their blood sugar in check, reduced symptoms of the disorder in mice.”

Seriously, these are all interesting but should be taken with a pinch of salt. (Hmmm. Interesting idea… what happens if we give the mice extra salt and…). The real question is, how all this relates to humans. Which brings me to…

Quote of the month

Sugary drinks are killing 184,000 adults around the world every year, and should be eliminated from people’s diets, medical experts have warned. The Independent (June 29th)

(Well there’s a coincidence – this article was based on a paper by Dr Dariush Mozaffarian who is the guy narrating our latest video post!)

Knepp gets a nice little write up in The Times (June 20th) this month.

Mother, baby, and childhood: epigenetics, diet, antibiotics and the microbiome

The Guardian (June 11th) reports on a study by Britain’s Medical Research Council, which found that a mother’s diet before conception ‘can affect a child’s lifelong risk of disease’. The research paper (full text here) identified significant epigenetic changes which were dependent on the mothers nutritional status during just a few days close to conception. (In the 1930s Weston A Price reported that traditional peoples frequently had special foods reserved for conceiving couples, pregnant and lactating women – something, it seems, we are only just rediscovering the need for!)

The Telegraph (June 30th) reports that antibiotic use in childhood ‘may cause obesity and diabetes’. They explain that the researchers found that “antibiotic exposure during a critical window of early development disrupts the bacterial landscape of the gut and permanently reprogrammes the body’s metabolism, setting up a predisposition for obesity”

These two reports are, in my opinion, highly significant and should be taken seriously by health professionals and parents alike. When Price wrote about ‘Nutrition and Physical Degeneration’ in the 1930’s he was not using words loosely.

Daily Mail (June 21st): why exercise often doesn’t help with weight loss. This is an important concept and one that I need to write about in far more detail at some point.

The Mirror (June 9th) encourages us to add eggs to our salads after researchers found that they help increase fat-soluble nutrient absorption.

But if you don’t fancy salad The Telegraph (May 27th) helpfully suggests 10 easy paleo recipes for summer. Lots of good ideas for grain-free, dairy-free meals here. Meanwhile, Time (June 16th) reports on 11 foods that people think are healthy, but aren’t.

Straw-man paleo-bashing finds its way into the headline in Forbes (June 17th): “The Real Paleo Diet Included Plants And Not Just Meat”. You don’t say! It’s a fascinating article about superb archaeological detective work that led to the identification of plant food remains on 200,000-year-old teeth, indicating that our ancestors ate a diet similar to modern hunter-gatherers. i.e. a paleo diet. Of course, these cave dwellers came from a sub-tropical location. Arctic hominids ate a diet much higher in meat. Which leads nicely to this…

In last month’s news roundup I included a piece about a family eating a beef-only diet. It’s one of those rather extreme examples of a paleo diet I wouldn’t generally recommend – although I have had patients that only turned the corner with the serious autoimmune disease after reducing their diet to just bone broth, sans vegetables, for a few days. However, a meat-only diet poses some interesting questions about human dietary adaptations. Certainly, many arctic hunters (such as the Chukchi) traditionally eat a diet very high in meat and fish for most of the year yet are considered some of the healthiest people on the planet. So I was amazed to find in The Mirror (June 15th) a report of a woman with PCOS who lost weight and regained her fertility by eating a zero-carb, 98% beef diet! Despite eating 2500 Cal per day she went from 18 stone to 9 stone in less than two years:

“Even the specialist fertility doctor I was referred to, said that my menstrual cycle would probably never return and I would need help conceiving all future children. However, my periods returned and I was able to immediately get pregnant. My menstrual cycles have been regular ever since without any assistance. Finding out I was pregnant were the greatest moments of my life. I have always wanted to be a mother. It was amazing.”

The Mirror article includes a link to her blog if you want to read her story in full.

So that winds up this month’s news. Interesting wasn’t it? Here on the south coast of England, we are basking in a heat wave, so next month we might have some stories on the necessity to drink plenty of water and not avoid salt…(hint hint).