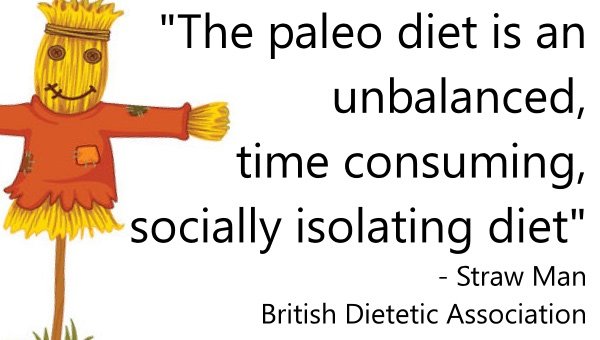 I was reading an article in the Wall Street Journal, entitled “Is a Paleo Diet Healthy?” which is based around two opinion pieces: on the “Yes” side is naturopathic physician Kellyann Petrucci, whose argument is supported by recent studies and scientific evidence. The counter argument, in the “No” camp comes from Professor Marion Nestle, who relies almost entirely on unsupported assertions such as:

What we know for sure is that the fundamental tenets of nutrition are variety, balance and moderation. The fewer kinds of foods consumed, the greater the chance of nutrient deficiencies. So while it is certainly possible to eat healthfully on a paleo diet, restricting whole groups of relatively unprocessed foods can make this more challenging.

Nestle’s ‘argument’ contains no studies, evidence or data, just appeals to fitting in with cultural norms, and eating what you like. Take a look: it’s quite an eye opener.

Although she doesn’t say it outright, Nestle implicitly sides with the idea that by eliminating ‘entire food groups’ like grains or dairy, the paleo diet is somehow ‘unbalanced’. A similar attack was made by the British Dietetic Association (BDA), who classed the paleo diet among the “Top 5 Worst Celebrity Diets to Avoid in 2015”:

An unbalanced, time consuming, socially isolating diet, which this could easily be, is a sure-fire way to develop nutrient deficiencies, which can compromise health and your relationship with food.

The weird thing is both Professor Nestle and the BDA agree that eliminating processed foods is good, as is eating more fruit and vegetables – yet these beneficial dietary changes are almost guaranteed on any paleo, primal or ancestral type diet.

So, the paleo diet is “unbalanced” is it?

Unbalanced? What does that even mean? The way it gets bandied about by dietitians, nutritionists (like Nestle) and regulatory bodies you would assume it was a well defined term in nutritional science. But, it’s not. And you don’t need a degree to realise it, just listen to how the UK Food Standards Agency puts it:

What is a healthy balanced diet?
Healthy eating is about getting the balance right. In practice this means having a variety of foods, basing meals on starchy foods and eating at least five portions of fruit and veg a day. [UK Food Standards Agency]

“Getting the balance right” is a vacuous and weasly statement – designed to give the impression that their advice is sound whilst avoiding the need to provide any definition or evidence for their implied position. It’s like the parent in a child-custody case who says “I’ve only got the best interests of the child in mind!” – implying that the other parent does not, or a politician saying “its the right thing to do” as an argument for their latest policy as if the opposition is only interested in doing the ‘wrong’ thing.

The FSA starts by referring to ‘variety’ then immediately skews the “balance” towards starchy foods and vegetables, as if it is obvious that this is the “right balance”.

In what way is basing meals on starchy foods ‘balanced’? Surely that will mean you have a very high carbohydrate intake which by any normal use of the term, surely, makes the diet unbalanced?

Why is a high starch diet more balanced than a low starch diet? Who gets to say where the ‘balance’ lies? Surely only a dead equal split 33% carbs 33% protein and 33% fats could ipso facto be called balanced? But that isn’t what they mean. What they mean is “A balanced diet is what I say it is, and I don’t have to give any justification for that, because I said it before you did – so there – you’re it and no returns”.

Whenever the term ‘unbalanced’ is used as an argument against any diet – be it paleo, Atkins, ketogenic or gluten-free – you should immediately see a straw man approaching, and behind it a charlatan, troll or ignoramus. What makes it a straw-man argument? The term ‘balanced diet’, having no intrinsic meaning, is being used to undermine the logical and reasoned basis of the diet it is challenging, instead of actually addressing any weakness in that diet’s rationale.

It is apposite to point out here that straw, or course, is a byproduct of wheat production – the hollow stems that remain after harvesting the corn. It was once used to thatch houses – that is before intensive breeding created the dwarf varieties grown today: Modern straw is now too short for good thatch, and too antigenic to recommend as a staple food – but that’s another story.

Is the British diet balanced?

So lets look at the ‘balanced’ British diet. Courtesy of National Geographic’s natty little interactive ‘What the World Eats‘ app: 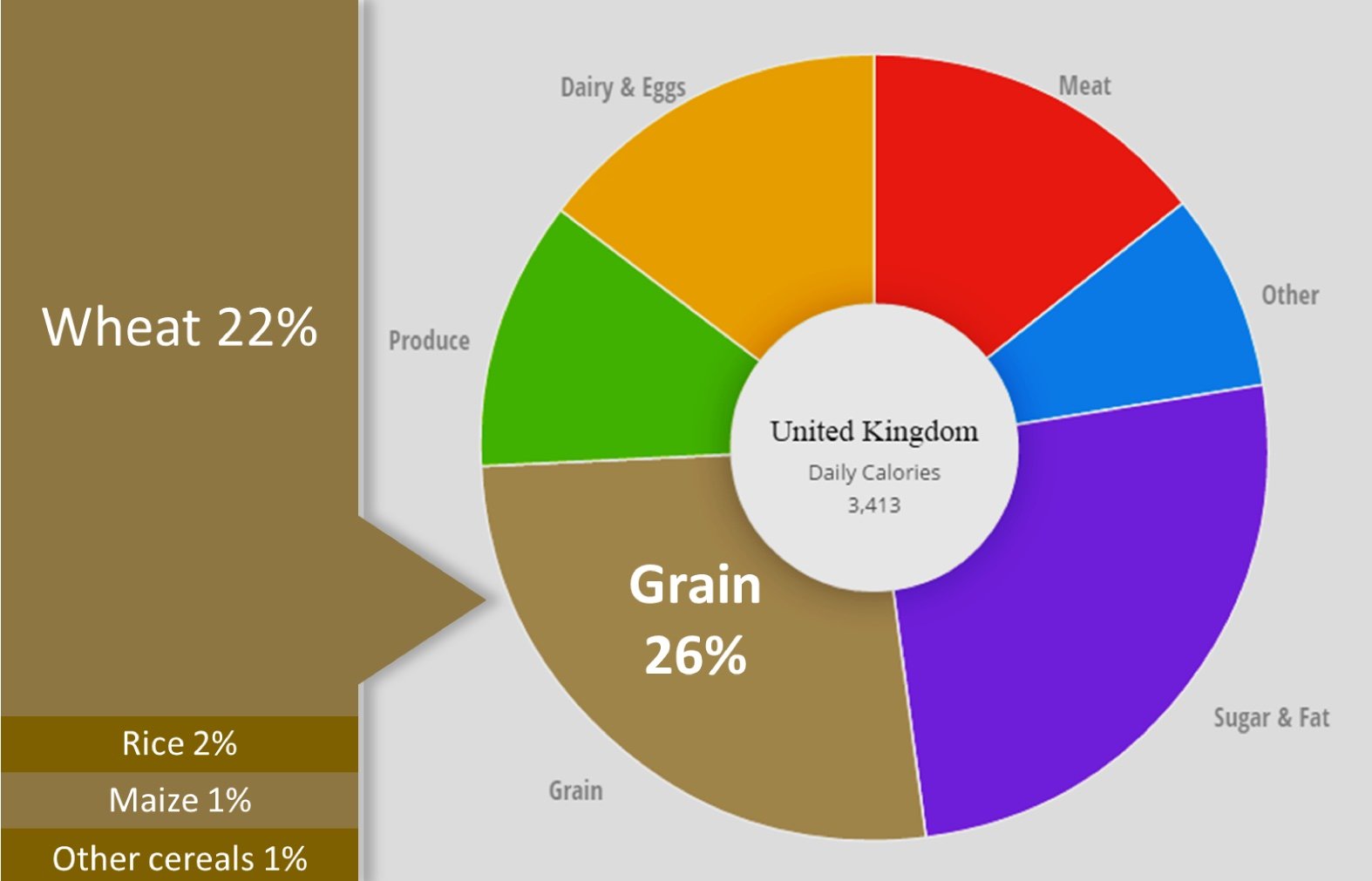 As you can see a staggering 26% of our national calories come from cereal grains, and by far the biggest proportion of that is wheat. Yet we are told by the ‘experts’ that we shouldn’t cut it out because it will reduce the variety in our diet and make it unbalanced? Really? How can these food authorities and dietitians expect to be taken seriously when they spout such drivel?

Sure, wheat provides variety in the diet in as much as it can be crafted into many different products – sandwiches, pies, pasta, breakfast cereals, cake and biscuits to name but a few – but it’s still just wheat. In fact wheat’s great flexibility has, I would argue, lead to a dilution of the nutrient density of the standard British diet: People can go through the day eating three meals and snacks all based around wheat and assume they are getting a varied and balanced diet yet eating almost nothing but one highly hybridized grass seed at every sitting.

Gluten-free diets also get accused of being unbalanced, due to studies showing that coeliacs suffer from nutrient deficiencies. But that’s partly because they are mal-absorbing due to gut damage, and also because they inevitably head for the gluten-free aisle, to fill up on bread and biscuit alternatives made from other highly refined grains and pseudo grains, which are just another form of junk food. A proper gluten-free diet should eliminate all grains, and replace them with more vegetables, dairy, nuts, fish and meats – real foods. Done properly, gluten-free diets increase nutritional completeness, not reduce it. Ironically, it is the Health Service, along with it’s dietitians, that promote gluten-free bread, cake and biscuit substitutes – heck, if you are coeliac you can even get gluten-free bread on prescription from the NHS. (Don’t do it!)

The second most monotonous (unvaried) part of the British diet is the purple section of the graph above – Sugar & Fat at 25% – which is made predominantly of sugars (11%) and  vegetable oils (13%). The FSA and BDA recommend reducing sugar consumption – which we can imagine fits their ‘balance’ argument as doing so would presumably increase consumption of the more varied segments: produce, dairy, meat and fish. However, on that basis they should also recommend reducing wheat consumption as it is preventing variety and unbalancing the diet by twice as much as sugar.

Furthermore, these agencies recommend reducing saturated fat (or ‘hard fat’) but not vegetable oil. Yet according to the National Geographic free animal fats only makes up 3% of the diet (of course there are fats in the eggs, cheese, and meat sections too), whereas the vegetable oil makes up a massive 13%. Where is the balance in that?

Just three foods: wheat, sugar and refined vegetable oils, account for close to one half of the UK’s calories

The shocking fact is that just three foods: wheat, sugar and refined vegetable (seed) oils, account for close to one half of the UK calories consumed. They are the real culprits that ‘unbalance’ the diet. They are the monotonous foods. Sugar and refined heat-extracted oils are empty calories devoid of nutrients whilst wheat has a limited mineral and vitamin profile, along with a raft of anti-nutrients, and provides only incomplete protein – and that is before we even start to think about gluten! These three, sugar, flour and vegetable oils, are Weston A Price’s ‘displacing foods of commerce’ that dilute the nutrient density of the diet and displace true nutritional variety that were the norm before the industrialisation of food. The fact is they contain no essential nutrients that are not found in greater quantities and in superior quality in other foods.

Adding to the list of charges against them: wheat, oils and sugar are all highly processed, industrial money spinners that require acres of arable mono-culture to produce. The inevitable environmental monotony and ecological imbalance that goes along with this are what the ‘balanced diet’ authorities are indirectly advocating. Shame on them.

So when next you hear the straw-man argument that Paleo, primal, gluten-free or other ancestral-type diets are “unbalanced” and “eliminate whole food groups”, remind yourself that it is the monotonous, industrial food groups that are reduced or eliminated, and that they in fact promote an increased consumption of fruit, vegetables, fish, meat, eggs, nuts and seafood. Compared to industrial wheat, vegetable oils and sugar these food groups are far more nutrient dense and varied. Consequently, it is these ancestral diets that deserve to be called balanced, or perhaps re-balanced, as they attempt to get us back to eating real, unprocessed foods: not as celebrity endorsed fads, but as long-term ways of life. Something dietitians and the FSA seem to think is beyond the public understanding.