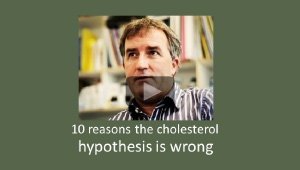 Here, at last, is the video of Malcolm Kendrick’s first presentation: ten key contradictions that show why the cholesterol hypothesis is wrong.

This talk was originally recorded on 27th September 2014, 7:40pm at the Assembly Rooms Chichester, West Sussex, England in front of an audience of over 100 people. It was organised, hosted and promoted by Rosemary Cottage Clinic Education Trust. The video was recorded and edited by Keir Watson.