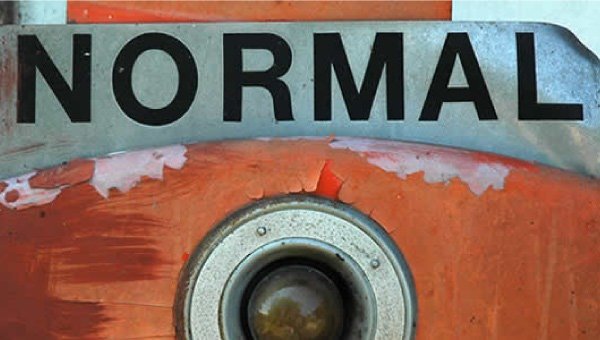 Read Time: 6 minWe call any diet that aims to restrict carbohydrates a ‘low-carb’ diet. But it is only low compared to current societal norms, where daily scoffing of chips, cake, coke, bread, crisps and chocolates barely raises an eyebrow. But is this a good benchmark? The UK dietary guidelines appear to support this position with the recommend daily intake of carbohydrates standing at 300g per day for men and women. By these standards restricting carbohydrates to under, say, 100g per day would be considered ‘low-carb’, but I want to make the case for suggesting that such a level is a more appropriate standard for ‘normal’, and the our current society norms and guidelines are actually the extreme diet.

I could make an argument for such a recalibration purely on evolutionary grounds – based on the high amounts of animal food evident in paleolithic, pre-agricultural diets we should lower our carbs to eat more in line with our genetic programming. Or I could base an argument on anthropological grounds – hunter gatherers such as the Ache, Inuit, Great Plains indians and Chukotka, famed for their health, thrived on diets consisting of 90% animal protein and fats, and very little carbohydrate. But today, I want to discuss some of the basic biochemistry that pretty much speaks for itself…

[I know some of you seasoned low-carbers are pretty clued up about insulin and glucose, so you might find part 1, below, a bit of a yawn, but stick with me please as part 2 and 3 look at free-fatty acids on high and low carb diets and fill in the other half of this story!]

The graphs above show how plasma (blood) insulin and glucose vary across the day for a normal healthy adult following a standard western diet. Around 8 am they have breakfast – cereal, toast or porridge probably, and the starches are rapidly digested to glucose sending plasma glucose levels soaring (orange line). Their pancreatic beta cells go into alarm mode and start pumping out insulin (green line). All over the body muscle, adipose (fat) and liver cells respond to the insulin and start absorbing glucose, removing it from the blood. The muscle and liver convert as much as they can to glycogen and store it. Once their glycogen stores are full any remaining glucose has to be dealt with by the liver, which converts it into triglycerides (transported by LDL cholesterol) which the adipocytes (fat cells) then take up and store. By 9:00 the glucose has spiked, and insulin succeeds in bringing it back down to normal soon after 9:30 am.

The same thing happens with each succeeding high-carb meal. We can clearly see the spikes for lunch and dinner in the graphs above. This roller-coaster glucose-insulin ride goes on all day, with only the over-night fast providing some rest.

This is considered a normal, healthy state of affairs by most orthodox medics and their text books. The pattern is assumed to be a necessary, or at least a normal way for the body to get energy (glucose) delivered to tissue. But is that what we are seeing? Is this really normal and healthy?

Why does insulin react so promptly to bring glucose down?
If glucose is simply fuel for the cells, why doesn’t it just float around in the blood at the high level, providing energy for the cells as they need it? Because excess plasma glucose is toxic – it damages endothelia (blood vessel linings), glycates proteins so that they don’t function properly and increases inflammation and oxidative stress.

The evidence: diabetes. When sugar remains high diabetic retinopathy, kidney disease, neuropathy and vasculitis inevitably follow. The damage in diabetes is not the lack of insulin, but the excess of glucose in the blood. Insulin, then, should be seen as a defense mechanism, kicking in to protect the body from the harm glucose causes.

Norm-glycaemia
Notice, that in the graphs above, although glucose can shoot up to different levels depending on the carbohydrate load in the meal, it always returns to a baseline of roughly 4.0 mmol/L (70 mg/dL), and in metabolically healthy individuals at least, never falls below. Which ever way you look at it, your body always aims to maintain plasma glucose levels at this baseline level, which, amazingly, is equivalent to a just one teaspoon of glucose throughout your entire blood supply.

When you eat, for example, a large baked potato you ingest 63 g of starch. Starch molecules are simply long chains of glucose, and are rapidly broken down in the small intestines and absorbed. Consequently, within a short time, 12 teaspoons of glucose enters your blood stream forcing your system to deal with it before it does too much harm.

At the other extreme, if you stop ingesting carbohydrates or fast – like you do every night – the body quietly and effortlessly maintains glucose levels of about 4.0 mmol/L (7.0 mg/dL, one teaspoon) perfectly. To do this, in the absence of in-coming carbohydrate digestion it initially gets the glucose it needs from liver glycogen stores. If you continue to avoid carbs by fasting or eating very low-carb the glycogen will be depleted in a day or so, after which the liver and kidneys manufacture the glucose they need by gluconeogenesis.

Which ever way you look at it, the body knows what it wants. Round about 4.0 mmol/L of blood glucose is where it likes it to be. That’s where the pancreas and insulin will put it if they can. That’s where glycogen and gluconeogenesis keep it. So why do we think it is clever, healthy, or normal to keep pushing it out of whack?

BTW When medics want to check your insulin response they get you to swig 75g of glucose solution and then they monitor how quickly your system clears it. The name of this procedure is a dead giveaway – it’s called an oral glucose challenge.

So, if the body is happy with only low levels of glucose between meals, overnight and when fasting, then where are cells getting the bulk of their energy from at these times? Fats. Fats in the form of free fatty acids (FFAs) – these are fats in their blood-soluble form, which can easily enter cells and be used for fuels. Unlike triglycerides they don’t need lipoproteins (LDL ‘cholesterol’) to be transport them around the body. FFAs are released from adipose tissue when insulin is low. Remember how, when carbs raised insulin that those same fat cells were forced to take in triglycerides (fats) produced by the liver from excess glucose? Only when insulin drops can those same fat cells release stored fats as FFAs into the blood so that cells can burn them as fuels. Despite the almost ubiquitous dogma that cells need glucose for fuel, most cells actually prefer free fatty acids as their primary source and only utilise significant glucose when forced to by insulin.

What we can see is that every time he eats a high carb meal, glucose rises (not shown), then insulin rises and free fatty acids fall. Between meals, insulin goes down (and glucose returns to baseline), FFAs go up again. A perfect system of balances and checks, maintaining sufficient energy supplies to the cells as the high carb diet makes glucose swing around wildly.

Part 3: NOT LOW-CARB BUT NORMO-CARB

So what happens if we stop spiking our blood sugar with high-carb meals three times per day? What happens if a healthy person reduces their carbohydrate consumption, and eats more fats in their place?

This person is still eating three meals per day, but the meals are no longer high-carb. Insulin hardly has to respond, so the insulin ‘spikes’ are reduced to nice little hills. Free fatty acids remain raised, providing the cells with all the energy they need. Glucose levels (not shown) tick over close to the one teaspoon level, and all is right with the world.

So, which is normal?
Well, this is decision time. Which of the graphs best describes a happy metabolism? Is the high-carb diet, with its insulin and glucose spikes, going through a repeated fire-drill three times a day normal? or is the gentle, strolling walk-in-the-park on the so-called low carb diet the normal one?

Understanding these graphs is a real help in answering this question, but theory alone would leave room for an academic debate. The proof of the (low-carb) pudding is in the eating as they say, and what the vast majority of people who adopt a low-carb lifestyle discover is that their energy and hunger levels settle down, so they begin to ‘feel’ like the third graph: steady. Gone are the mid morning munchies. Gone too the cravings for quick sugar fixes. Eating, without overeating, becomes effortless. Appetite regulation is restored.

Now tell me that’s not how we’re supposed to be!

3 thoughts on “Is Low-Carb really Normo-Carb?”

The chemical warfare on your plate