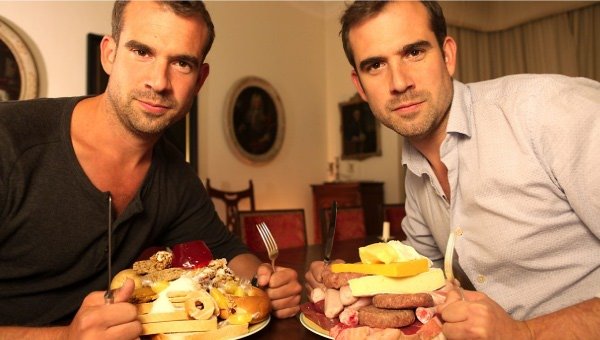 If you saw the Horizon programme, you may want to read the New Scientist article to remind yourself of what proper scientific journalism looks like. If you didn’t then don’t worry. You didn’t miss anything important.

The New Scientist article is clearly focused and well-informed. I know this, because I have read a lot of the research literature on which it was based. At the other end of the spectrum, the BBC programme was at odds with much of the research and suffered from serious inconsistencies, starting with the diets they were clamiing to test. Billed as Fat vs Sugar, what they really had was one brother (Dr Fat )on a high fat and high protein diet (‘low carb’) whilst his identical twin (Dr Sugar) was on a high starch and sugar diet (‘low fat’). Straight away this makes it impossible to actually draw any conclusion about fat vs sugar!

For example, in one of the ‘experiments’ the twin brothers ate breakfasts of their respective diets, which were carefully served to have equal calories. At lunch they were allowed to eat freely and the calories they consumed were calculated. Dr Fat ate only about half the calories of Dr Sugar, as his diet was more satiating. They pinned this on the increased protein Dr Fat was eating. It is well recognised that protein is more satiating, but what does that have to do with fat vs sugar?Every school-kid knows you can’t change several variables at once if you want to get a valid conclusion. So how can you tell what was causing what? Was it the fat or the protein? The starch or the sugar?

To make matters worse they introduced an animal experiment where rats were given either a high sugar or a high fat diet. In both cases the rats maintained calorie control spontaneously. It was only when they were fed fat and sugar together that they lost control and over ate. This seems to be at odds with Dr Sugar who over-ate on his high sugar lunch, whilst Dr Fat’s appetite was controlled on his high fat version.

At the end of the two weeks, both doctors had lost weight. The experts advised that extreme diets don’t work, and recommended the doctors go back to a more ‘balanced’ diet. Presumably this meant Dr Fat eating more sugar and Dr sugar eating more fat? The very thing that in the rat experiment caused overeating? So, I guess, predictably, they have both put back on the weight they had lost in this experiment?

So, was there anything I liked about this programme? Yes:

the best experiment was the one when they tried to find out the effects on mental performance of flying half way across the world. This was a very well designed study. They used two twins. One was given a battery of mental tests in the uk, whilst the other had to fly to the USA, and take the tests there. As you would expect, the one suffering from jet-lag did poorly. This was a great trial, but, unfortunately, completely spoilt by confounding variables – it turns out one of the twins was on a low carb diet, and the other on a high carb diet, so the trial has had to be binned.

You get my point. Nothing in this programme was science. It was ‘edutainment’ dressed up to appear ‘scientific’. Don’t worry. It won’t have the slightest effect on the real science nutritional researchers beaver away at every day. They only publish in peer-reviewed journals, and most of them are sensible enough to steer away from TV’s pop-science.

In the same way that the obesogenic 50:50 mix of fat and sugar seems to overpower our dietary sensibilities and make us stuff our faces, so TV manages to overwhelm our critical faculties and stuffs our heads full of nonsense. With its irresistible blend of dramatic theatre and important soundbites it creates a highly digestible pastiche that manages to deliver its message to our conscious mind, whilst cleverly slipping its contradictions and half-baked ideas under the radar of our logic. Unfortunately, for many people, TV is our cultural reference point, and no ideas can truly be valid until they have been on TV or in the newspaper. God help us.

So, ditch the TV, and start reading proper scientific journals, books and information. Such an extreme diet might lead you to regain a little lean logic

BTW The Doctors, have a series that has been running on Channel 4, Medicine Men Go Wild. In episode 3 they visit the Chukotka people in the far north or Russia, who still live mainly on walrus and whale. Their diet is dominated by meat and fat and almost devoid of fruit, vegetables and carbohydrates, yet they have no heart disease. One of the Chukotka people, however, has poorer blood lipids than the others, and the Doctors are very ready to ascribe this to the shop bought refined carbs he is eating. Who says there is no integrity in showbiz?