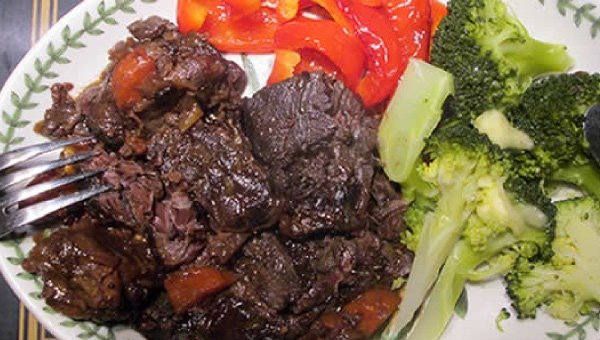 It was once suggested to me that the quintessential English dish known simply as meat and two veg, which has often attracted the ire of the French, was in fact a thing of great pride in the days when our beef was the envy of Europe. Such was its quality that it needed only the simplest cooking to create a dish fit for a king. This weekend we proved to our own satisfaction that this is indeed true when we cooked some of the best beef produced in the south of merry England

At our “Grass-Fed Meat Revolution” seminar last October we were amazed and delighted to hear about the re-wilding project at Knepp castle. The horses, cattle, deer and pigs live on the estate in naturally associating free-roaming foraging groups – about as close to wild as can be. To control numbers and reap the greatest environmental benefits, humans take the place of top predators, harvesting a proportion of the populations annually. Consequently the estate produces several thousand tonnes of meat each year.

This weekend we finally got round to tracking down a farm shop that sells their produce: Crossbush Farm Shop (near Arundel, West Sussex). We purchased about 2 kg of beef shin (at £8 per kilo) and 2 kg of beef brisket (at £10 per kilo). For better-than-organic-quality this was very good value. You can pay more than that for bog-standard supermarket fare!

We have frozen the brisket which awaits a family dinner, but the shin was cooked on the day of purchase, all of it, in a large casserole pot, long and slow (that’s the key). The result: meat-and-two-veg that is truly fit for a king!

There was plenty for the next day too…

…and lots left over for lunches. In fact that 2ish kilos (£15) has made 8 generous meals. Not only generous but utterly delicious.

As you can see from the images above this Knepp beef is an extraordinarily rich dark purple-red meat, (even before I doused it with red wine!), and it fell apart at the touch of a fork. The cartilaginous parts – which makes shin a cheaper cut and gristly if undercooked – have become soft and succulent from the hours of slow cooking – significantly enhancing the nutritional value of this dish (very high in glycosaminoglycans, which are then available to our bodies for the rebuilding of joints and cartilage) and, it seems, without destroying the n3 fatty acids .

Knepp Beef shin – 2kg approx
Onions – 4 – 5 large, chopped into large pieces
Carrots – 3 large, chopped into largish pieces
Celery – 1/2 a head, chopped roughly (I only had half, but would recommend a whole head of celery)
Red wine – 3/4 bottle organic red wine (or stock/bone broth if you have it or a combination of the two!)
5-6 tbs Duck fat
Sea salt & freshly ground black pepper

Cut the beef shin into large chunks and put aside. Heat duck fat in a large cast iron casserole pan. Add the roughly cut vegetables and gently fry them for 15 minutes. Remove the vegetables, and fry the chunks of beef, on a low heat, turning occasionally until browned all over – about 15 minutes again. Add the vegetables back in, plus 1/2 a bottle of red wine, salt and pepper. Put the lid on the casserole, and place in the oven at 140° for 4-5 hours. Check occasionally and turn the meat into the juice to ensure it remains moist. Top up wine/stock. Turn down to 120° for the last 2 hours.