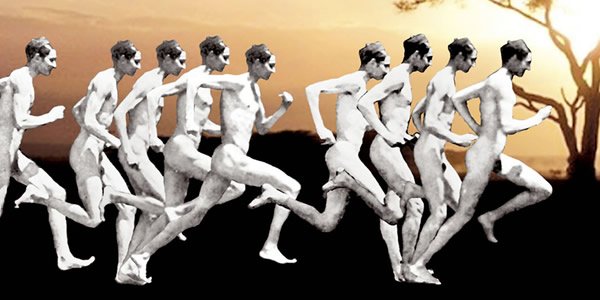 There is a perennial debate about the kind of diet humans are best adapted to, what you might call our genetic or paleolithic diet. Unfortunately, this debate sometimes gets distracted by the false dichotomy of whether we are carnivores or herbivores. The answer is neither, or rather both, because humans, being part of the genus Homo, and thus part of the family of great apes, are biologically omnivores. The real question then is where on the spectrum of omnivory does our genetic programming lie? Our anatomy and physiology provide some answers, especially when considered in an evolutionary light. Two key observations that have come to light in the last decade or so revolve around the observations that humans are the best long distance runners and best throwers in the animal kingdom.

The first humans were endurance runners

Humans have a huge array of adaptations that enables him to out-run any land mammal. Whilst he can’t beat them all on speed, he can, through persistence, run any of them to ground. Even great ‘runners’ like the kangaroo, apparently, could be run to exhaustion by aboriginal hunters (ref). In the Nov 2004 edition of Nature, University of Utah biologist Dennis Bramble and Harvard University anthropologist Daniel Lieberman examined 26 traits that enhance our ability to run. Only a few of these are required for bipedal walking, and most are entirely absent from other apes, indicating the great evolutionary significance of running. What is more, our early ancestors were walking for millions of years before the sudden emergence of all these traits together in the fossil record some 1.5 million years ago, when Australopithecus was replaced with the first of the human lineage Homo habilis. Bramble and Lieberman argue that running gave enormous evolutionary advantage to early humans, determining our unique form and making way for an increase in hunting efficiency that would fuel the subsequent exponential increase in brain capacity leading to Homo sapiens, us.

Our running adaptations include leg and foot tendons and ligaments that act like springs, foot and toe structure that allows efficient use of the feet to push off, shoulders that rotate independently of the head and neck to allow better balance, and skeletal and

more efficiently without overheating. Amazingly, humans have a longer running stride than any four-footed animal. quadrupeds can only take one breath per stride,  a restriction circumvented by bipedal locomotion. There are many other fascinating details to this anatomical optimisation, which you can read about here.

As you may have noticed people sweat. Sweating provides us with a very efficient cooling system. Very few other mammals can do this and most rely on panting. Unlike sweating, panting is not possible whilst running. (Interestingly, horses are one of the few mammals that use sweating as a primary cooling mechanism, and consequently represent our nearest competitor in the long distance running stakes). Sweating offers a specific hunting advantage for humans making it possible for us to chase prey to exhaustion. Our bare skin and large surface area allow us to stay sufficiently cool whilst running long enough even in equatorial africa where running evolved. This strategy is known as persistence hunting, and is still practised by the at least one tribe of hunter-gatherers in the central Kalahari Desert in Southern Africa, and is documented in David Attenborough’s The Life of Mammals (below) which shows a Bushman hunting a kudu antelope until it collapsed.

In the video above, we see the hunters using sophisticated tracking skills which are essential to a successful hunt. Tracking skills like these are understood to involve very high level mental functioning – the ability to formulate multiple hypothesis based on limited observational data, and sort and select among these throughout the tracking activity. Some scientists believe that the brain of modern man, Homo sapiens, evolved some 200 – 400 thousand years ago, with the climatic changes that reduced the availability of large game like elephants in North Africa and forced man to hunt fleeter migratory animals, especially deer, which required higher level mental processing to  tracking and catch. (ref)

One observation that appears to run counter to the idea that humans are designed to be long distance runners is the fact that at least 30% or runners get injured every year (ref), usually sustaining lower leg injuries. This is thought to be due to the modern practice of wearing shoes, leading to the use of the heel for landing the weight of each stride. Our ancestors ran barefoot landing on the ball or middle of the foot, significantly reducing impact shock.

Bramble and Lieberman suggest that as well as making us good at persistence hunting, running allowed Homo habilis to become effective scavengers, reaching a kill before competition such as hyenas. So running was a key feature that promoted human evolution by increasing our success as meat eaters. Part of that physiological adaptation includes shoulders that rotate independently of the head and neck to allow better balance. And those shoulders first present in Homo habilis provided another massive evolutionary advantage, one that would allow us to become adept at using rocks and spears to further increase our hunting efficiency above that seen anywhere else in the animal kingdom.

Humans can throw an object with great force and accuracy

Along with our ability to beat any land animal in endurance running humans simultaneously evolved the ability to hurl projectiles in a way that opened the possibility of hunting with stones and later spears.

One of the authors of a recent paper on this subject, Dr Roach said:

“We think that throwing was probably most important early on in terms of hunting behaviour, enabling our ancestors to effectively and safely kill big game. Eating more calorie-rich meat and fat would have allowed our ancestors to grow larger brains and bodies and expand into new regions of the world – all of which helped make us who we are today.”

“If we were not good at throwing and running and a few other things, we would not have been able to evolve our large brains, and all the cognitive abilities such as language that come with it. If it were not for our ability to throw, we would not be who we are today.”