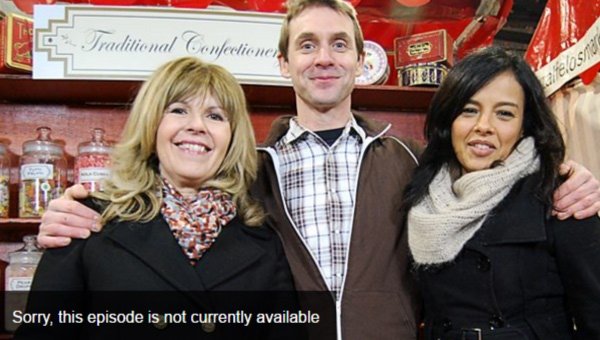 Bang Goes the Theory, Series 7: Episode 3 ‘Sugar on Trial’ – available on the BBC iplayer until May 6th 2013

My God! This was a programme designed to keep us all stupid!!!  The timing of the broadcast is highly suspect as only the week before, Professor Robert Lustig was in England making a big impact with the latest research on sugar. He was on the PM programme on Radio 4 on Monday 11th March; he gave major lectures – London and Oxford University on 12th and 13th March respectively; at least three major national newspapers carried  articles by him, about him and his work or on the subject which he came to England to properly expose i.e. SUGAR and why/how it is TOXIC. This feeble and facile BBC tv programme looks to me like an attempt by Big Sugar to fight back. They are full of dirty tricks, that’s nothing new, but it won’t wash. The truth is now known and can be shared and understood by everyone.

As a member of FAB Research (Food And Behaviour research – Oxford University) I was fortunate enough to attend the London lecture of Professor Lustig, and it was outstanding. Not only is his work groundbreaking, and his lecture illuminating, but he and I had a number of significant conversations over the course of the afternoon between the other speakers and at the tea break, as my seat was right behind his. He was extremely generous with his guidance on some of the science (what happens in the mitochondria under the influence of fructose) and in his openness to my input, and his suit showed he appreciates good tailoring!

So this BBC effort is deserving of a thrashing from me, and of every intelligent person out there. In fact I will be lodging a serious complaint with the BBC and the Open University (the scientific advisors apparently), and maybe even the hepatologist who was wheeled on and talked rubbish. I am confident in my criticisms, as the errors were so serious and were maintained throughout the programme, that it indicates an agenda on the part of the program makers. I will reveal them here:

This quote from the programme’s opening sequence typifies the flaws that permeate this episode:

“Without sugar our cells couldn’t do their jobs, our muscles wouldn’t work and most importantly our brains simply wouldn’t function.” (1 min 11 sec)

This is a perfect example of the junk (sub-GSCE level) science espoused throughout the programme. The first two words “Without sugar” lead the viewer to assume the presenter is talking about dietary sugar – that our cells are somehow dependent on us ingesting sugar. This is plain nonsense and any half-decent science editor would have avoided misleading the audience by clarifying the remark. What the statement is referring to is blood sugar (plasma glucose), not sugar in your food. Yes, blood sugar is raised when you eat table sugar, cola, sweets etc, but it is actually raised higher and faster when you eat rapidly digested starches such as bread or potato. This is because sugar is only 50% glucose, whereas starches are 100% glucose.

However, even if they had opened by saying “Without glucose” the remark would still be seriously misleading as it implies that our cells are exclusively dependent upon glucose for fuel. This is not true, as most tissues in the body are able to utilise fatty acids alongside, and often in preference to, glucose. For example, muscles prefer to burn fatty acids in the resting state and can take glucose from the blood or their own glycogen stores to meet the demands of sudden exertion. Many endurance athletes are learning that they can go further and last longer when adapted to a high fat diet as the muscles become more efficient at burning fats when dietary glucose is low. Another example is the heart which gets more of its energy from fatty acids than glucose. Whilst it is true that the brain always uses some glucose, and cannot burn fatty acids directly, it is able to burn ketones – a fuel produced by the liver when ingested glucose sources are low. Almost all tissue can use ketones as they are transported into cells and metabolised (burned) readily.

Possibly the most serious implication-by-omission in the above quote is failing to mention gluconeogenesis. Gluconeogenesis means generating new glucose. Our bodies are perfectly capable of creating all of the glucose they need. You don’t need to take in one molecule of sugar, starch, glucose or fructose for your body to maintain a perfect plasma glucose level. In fact, even if you go on hunger strike and starve yourself for forty days your body will dutifully maintain your blood sugar level at just the right amount. Which pretty well leaves the BBC’s statement in tatters. In fact the only thing that will cause your blood sugar to go out-of-kilter, is ingesting sugar or starch. If you do that then your otherwise stable plasma glucose level will rapidly rise, provoking an emergency in the body which is responded to by the release of insulin in an attempt to return it to normal as swiftly as possible to minimise the damage caused by raised blood glucose. (Unless you are diabetic of course, in which case the glucose level will remain high and cause terrible damage to your blood vessels, eyes and peripheral nerves. Ahh, how lovely ‘sugar’ is!)

So, we can make all the glucose we need perfectly, without ingesting any, and most of our cells can run on fats or ketones anyway. Furthermore, there are no essential dietary carbohydrates, but their are essential fats, which are needed to develop brain tissue, and every cell membrane is composed of fats, so the quotation above could be significantly improved like this:

Without fats our cells couldn’t do their jobs, our muscles wouldn’t work and most importantly our brains simply wouldn’t function.

Now that’s a statement I can get behind, as it is scientifically accurate. But the BBC prefer politically correct propaganda over accurate metabolism and physiology it seems.

The team come to the remarkable conclusion that white sugar is more healthy (shouldn’t that be less bad?) than brown sugar, using the twisted logic that as brown sugar is made from white by adding molasses, therefore, QED, white sugar is less processed than brown! Gosh, these guys are really helping us develop our formal logic skills aren’t they!

Let’s have a look… white sugar is classed as ’empty calories’, because it provides only energy (calories) without any micronutrients (vitamins, minerals, phytonutrients etc). And as digestion of sugar uses enzymes not all of which are reabsorbed, white sugar causes a net loss of nutrients from our body. That’s not clever – and if we tried to live on sugar alone we would become malnourished and die. Any amount of white sugar we eat requires some other food to provide the micronutrients we need. So there is no doubt that the molasses (brown bit) is the one bit of sugar that has some nutritional benefit. As you can see from fig.1 Molasses contains good quantities of a some vitamins and minerals, whereas white sugar contains none. If the debate is about nutrition then the BBC’s argument that white sugar is less processed than brown is simply facile. Having said that, I wouldn’t bother with brown sugar either. Molasses I might use, but it is still 75% sugar.

“But sucrose is not the only sugar we find in our food. Fruit has lots of fructose. And there is another… perhaps the most important sugar, glucose – the universal energy source for almost all life on earth”

In a few short sentences the presenter leaves the viewers thinking there are three different sugars. Failing to explain that sucrose is 50% fructose, 50% glucose. As for glucose being “the universal energy source for almost all life on earth”, well, most mammals rely primarily on fatty acids as a fuel source. Sheep for example convert over 80% of their ingested food into short chain fatty acids by hind-gut fermentation. Carnivores eat almost 100% meat diet. Again – this seems like a deliberate attempt to confuse blood glucose – a necessary but secondary fuel source, created internally by mammals – with external glucose sources (carbohydrates) which few of them consume.

The presenters are telling us that we have always eaten honey, and would go to great lengths to get it. That’s probably true for most hunter gatherer peoples (not the Inuit though, as I don’t think they have bees that far north, please correct me if I am wrong folks), but it is duplicitous. How many kilos of sugar/honey do you think hunter gatherers eat each year? I would bet it is less than 1% of what your typical BBC viewer eats. Also, see how the people in the clip are eating the entire honey comb – wax, grubs and all. There is far more than just sugar in that rare delicacy. How I love watching my hunter gatherer cousins in action!

In this section one of the presenters undergoes a ‘scientific test’ where she is given a mental-agility task to tackle on the computer, after swilling a liquid around her mouth. Once with an artificial sweetener and once with sugar solution. She is supposed to have performed better with the sugar solution. The idea being that the meer taste of sugar stimulates the brain. This is an interesting idea and I expect there is some good research on it. However, in this case it was not a scientifically valid test as she tasted the glucose second when she would be expected to do better anyway as it was her second go at the task. This ‘dumbed down’ science is apparently all that you good viewers out there deserve! Aunty thinks you are not up to real science!

In this section we are given some information about Professor Scott Nelson, who has been diagnosed with non-alcoholic fatty liver disease (NAFLD). The very first line of this section implies that sugar may be implicated, but quickly moves away from this position to lay the blame at the door of “excess calories”, i.e. the professor is simply eating too much. This is nonsense – look at the fellow! He is slender. If his condition were simply due to ‘eating too much’ he would be fat. The whole point of the link between NAFLD and sugar is the fructose (remember sucrose is 50% fructose). Fructose is metabolised completely differently in the liver compared to glucose – it acts much more like alcohol, which also causes fatty liver disease. There are dozens of scientific papers linking fructose to NAFLD, many suggesting it is a primary cause. It is highly irresponsible of the BBC to deflect attention away from this important research towards the discredited ‘calories in, calories out’ hypothesis. Fructose has the ability to change hunger signalling hormones, stimulate reward centres in the brain leading to addiction and create a cycle of bingeing, craving, tolerance and withdrawal. It’s every bit as much a drug as alcohol, but without the buzz. This is what Dr Lustig has been communicating around the world. Don’t listen to this clap-trap from the BBC. Do your own research!

To be fair to the BeeB, they do provide some good programmes relating to sugar. Try this one, on the history channel: How we became addicted to sugar

3 thoughts on “Bang goes the BBC’s credibility: Sugar on trial?”