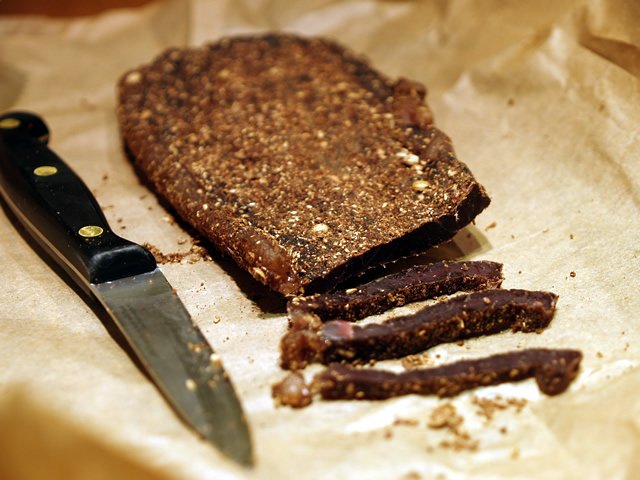 One of our foodie friends, Sally, just brought round her homemade biltong – that’s it above – and it was delicious! Her biltong is made from beef and her secret spice mix includes coriander and cumin seeds. The result is a chewy, succulent low carb snack with a mouth-watering savoury flavour. BTW, some pieces were very chewy, but this was not a problem as it kept yielding its flavour all the time. It’s more-ish quality explains its popularity in South Africa.

For those of you that have never heard of biltong it is a traditional dried meat of Southern Africa, taking its place in the pantheon of such traditional dried, preserved meats such as pemican (trad. North American) and jerky (trad. all over the place). Biltong is most often made from beef, but a South African friend of mine has had kudu and buffalo biltong and says that in South Africa it is available and eaten everywhere – as commonly available as crisps are in the UK!

Whilst biltong is suitable for a low-carb/paleo diet, it is rather high in protein and, conversely low in fat (although that does depend on the leanness or otherwise of the piece of meat it is made from).  For most of my patients and friends I would recommend a higher ratio of fat to protein in the diet than you commonly get in biltong, but used as a snack (rather than the mainstay of your diet) its ideal!

As I didn’t make this biltong I can’t give an accurate hand-on-heart recipe just now, but I will tell you what our friend told us:

Sally took a large slab of silverside beef – good and fatty – and cut it into slices about one to one and a half centimeters thick, cutting along the ‘grain’ of the muscle fibres. She then rubbed salt into the slices, thoroughly on both sides and left them aside for two hours. After this she washed off the salt with vinegar – a key step that distinguishes biltong from jerky – then she shook them part-dry and rolled them in a spice mix. Finally she hung them on steel hooks in a biltong dryer (a cardboard box with a 40W lightbulb inside and a computer fan through one side to keep the air moving). After a few days, job done!

The key to successful biltong preservation is to keep it dry. Sally hangs her biltong in the kitchen on hooks so they remain aired. If they get moist – such as if they are left in a fridge, sealed box, or even on a plate for several days, the humidity may allow bacteria to grow. The purpose of the salt & vinegar treatment is to prevent bacteria getting a foothold while the drying takes place.

There, I am going on as if I’m an expert! Sorry, just trying to pass on what I have understood.

Why no one should eat grains. Part 2 – The definitive guide to Non Coeliac Gluten Sensitivity