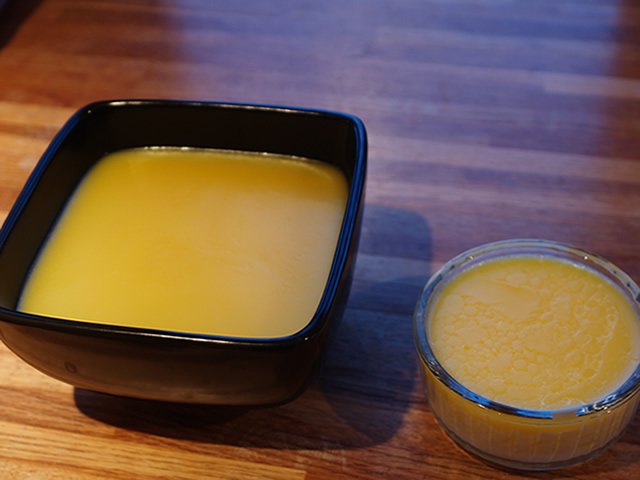 I make my own clarified butter – which is called ghee in Asia – for a number of reasons: Firstly, some members of my family are allergic to cow’s milk proteins, and once carefully clarified these proteins are separated out and only the butter oil is left – so we don’t react to ghee.

Secondly, at high temperature cooking, e.g. frying, ghee it is less likely to burn as it is the lactose and casein (milk protein) that burn when frying in butter. Also, ghee keeps for longer, as it is just butter fat. If you or a family member is very very reactive to cow’s milk protein use goat’s butter to make your ghee.

How to make clarified butter / ghee

1. Place three unwrapped pats of unsalted organic butter in a milk pan. Here it is shown melting on the hob but it is better to do this in a cool oven, at about 50 – 90°C. If on the hob use a heat diffuser to avoid burning the butter, and place it on a very low gas flame and leave it until it has all melted. Don’t stir it. Put a timer on so you don’t let the heat build up in the melted butter, as it can ‘volcano’ at you if you forget it. Check every 10 mins that it is melting nicely.

2. If using the hob method you will see that a sediment has collected at the bottom of the pan – this is the protein, lactose and water in the butter, and the fat, being lighter, rises to the top. This is how the components of butter are separated, and what we want is the fat portion only. If using the cool oven method, which is safer as you are less likely over-heat it, so you won’t need to check it as often. Still use a pan with smooth sides and a lip, and let your pats of butter melt gradually, and peep in after half an hour to see how it’s going. It may take over an hour to fully melt and reveal the golden oil coming to the top, and the white cloud at the bottom. Either method may also see some scum floating on the top (like in the image above). This can be carefully removed with a shallow spoon and disposed of. Different butters perform differently in this respect.

3. When the butter is fully melted you will see deep, clear, golden oil on top and a cloud of pale matter at the bottom. Now you slowly pour off the butter oil into a suitable dish through a sieve, which will catch any fine residues that have floated to the surface. Be very watchful while pouring, as you must stop when the cloud at the bottom tries to also pour over the lip. Don’t let it!

4. Leave the butter oil to fully cool in its container – it will set to a smooth golden-yellow mass (see square black dish in image opposite). It can be used in the same way as ordinary butter for frying, baking or eating straight off the knife! Now, with the protein and lactose removed this clarified butter will not burn when cooking at high temperature, so make this fat your choice for all high heat cooking.

The smaller round dish in the photo has the separated milk proteins/lactose/water in. This does not have to be wasted. Just pour the cloud from the bottom of the pan into a small dish and refrigerate it too. It can be used in cooking for anyone who does not have milk allergies, e.g it can be added to scrambled eggs. The fat will harden on the top but underneath it will be opaque white liquid, which is concentrated milk protein and lactose and, please note, if you started with salted butter it will have all of the salt concentrated in it, so don’t use it for a sweet dish. Equally, if using clarified butter to replace salted butter in a recipe remember you may need to add a little extra salt to it, depending on the dish of course.

I hope you enjoy your ghee making. I use it on a daily basis for much of my cooking. I always do it in the oven now, as I had a couple of very messy, potentially dangerous, hot melted butter ‘volcano’ experiences, where the heat built up in the oil and, the moment I moved it, it exploded. So I strongly recommend the oven method.